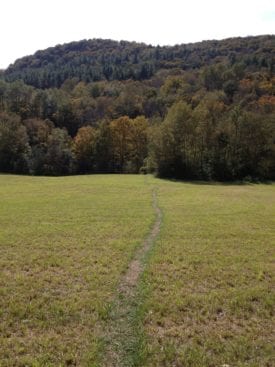 I looked down at Pomfret Road, where I had just been dropped off. I was breathing as hard, having climbed 50 feet as I had been after thousand feet two weeks ago. It was just so unfair. I should be able to sit on my butt for two weeks, with my feet in the air, and maintain the same fitness level. But, instead, the Appalachian trail would pay me for leaving it for two weeks.   It was good to be back, though. I had been a little concerned about the resistance of the initial foot infection. Still, my excited immune system had fought it off fairly quickly once they found the right antibiotic, and I was ready to return to the journey south.

As I climbed through the fields and forests, I marveled at the beauty around me. The trail was fantastic, a gently rolling path paved with early fall leaves and spruce needles. I could hike looking forward and around me, not wholly focused on the trail at my feet. Better yet, the sun was out, and the mosquitoes were sluggish. I could swipe away the slow little monsters as they swooped in for a nip. It was an excellent day!

I made my way out to VT 12, hooked a right onto the quiet paved road, and headed for a farm stand about a half mile down.   I arrived at the old wooden structure and wandered through the store,  gazing at the locally made goodies.   Selecting my low-calorie treats, I paid and went outside to sit on the store’s steps. I was not very hungry and sat sipping my orange soda as I peered up into the hills across the road, enjoying the pre-fall shades of orange, yellow, and red that blended to form the VT fall canopy I had been excited to experience on this hike.

The leaves were barely starting to pop, and the next few weeks would be beautiful. I also purchased an apple turnover to go with my sandwich for dinner.   It looked delicious, and I fought the desire to rip off the plastic wrap and gulp it down. Thirty minutes later, the owner filled my water bottle, and I was on my way.

I considered checking out Winturri Shelter to sign the register and camping nearby since I had already begun feeling a slight mist in the air. It was supposed to rain tonight, and I wanted to have my tarp up before it started in earnest. I rarely stayed in a shelter but would sometimes camp nearby if there were good camping spots a fair distance from the structures. There were often good water sources also located near the shelters. I also wanted to sign the shelter log. This let other hikers know I was in the area and also let me know when hikers I knew had passed this way.

About a half mile before Winturri Shelter, I heard numerous gunshots echo through the mountains. I stopped on an old forest road trying to determine the direction. I did not realize it was already hunting season. I had already considered purchasing some neon orange garment and now regretted not having at least brought along a mesh vest or something else light and bright.

As I approached the shelter sign, I smelled smoke, meaning somebody was there. I stood and looked down the approach trail, trying to decide if I should head down to the shelter. I could not see the shelter, but a few male shouts echoed up the trail. It seemed a little early for thru-hikers, so I did the math in my head.

I resumed hiking as my newly healed foot fussed. Finally, I was ready to call it a day, but I was not inclined to be a “Deliverance” statistic and kept moving. A little over an hour later, I came to a sign for a lookout with a cabin. It was only a tenth of a mile up the mountain, and I wanted to see this cabin NOBOs I had met had talked about.

The cabin looked brand new, and it was 5:45, with nobody there but me. It had also begun raining, so I went inside and checked out the little structure. The cabin looked newly renovated, and the owners of “Lookout Farm” had a sign on the door welcoming hikers. There was no electricity, but it was dry and clean. The owners of the property were undoubtedly generous.

I picked a floor spot and settled in for the night as the wind and rain began to pound away outside. I doubted other people would show up for the night, but still set up to one side of the cabin in case a group arrived. I did not want people setting up around me.

I laid back on my inflatable pad listening to the wind and rain. It was loud against the wooden walls. I turned my head and strained my ears for the scrabbling of tiny toenails. I sealed up my food tightly in a compactor bag and hung it from one of the strings, which had an upside Bumblebee tuna can attached, to thwart any vermin marauders. I prayed for a vermin and visitor-free night as I drifted to sleep.