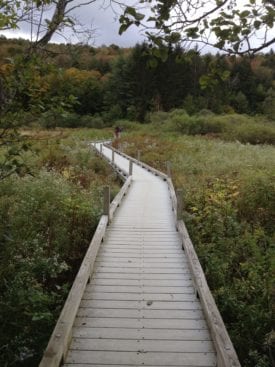 It poured last night, but I was dry and snug in my cabin.  I slept lightly in the dark, empty house and thought I heard a few squeaks during the night, but Mickey never showed his whiskers.   My sleep was fitful.  I had seen too many summer camps, with cabins, in horror movies to shake the feeling that Jason would throw open the door at any moment, waving his machete over his head.

I was up early and headed out into a bleak, grey morning.  The sun tried to come out a few times, but by mid-afternoon, it had started raining again.   I could also feel the temperatures dropping, but I still bounced lightly along, knowing it was supposed to clear up and be sunny and brisk over the next couple of days – perfect hiking weather.

The hiking was nice, with a few steep climbs, but nothing too strenuous.  VT has some long, meandering ups and downs.  I stopped before VT100 to talk with Laura and her dog Beans briefly, then crossed over the next paved road and headed up through Gifford Woods State Park as the rain began to come down harder and the incline increased.  I have noticed that there is often a correlation between worsening weather and tougher climbing.

My feet started aching around mile 14.  I was surprised.  They didn’t usually start complaining until mile 17 or 18.  I had planned to stay @ The Inn @ Long Trail for the night, which would put me at 17 and some change, and the foot fatigue began to recede from my thoughts as my stomach locked onto the image of “real food.”  It is very little my mind prioritizes over food.  Food was better than ibuprofen, alcohol, meth, and cocaine – kidding, Dad!

I finally arrived at the intersection for Sherburn Pass Trail.  Many northbound hikers had told me to take this half-mile trail to the Inn, but that would cut off over a mile of the AT.  I believe it was the trail I took in 2005, but it was now marked by a large blue blaze, not the Appalachian Trail white blaze.  I stood at the intersection and fought my body.  My feet, stomach, chilled body – they all screamed, DO IT-TAKE TEH BLUE BLAZE!  I don’t consider myself what some call a “purist,” but I knew I would probably not come this way again, and I sighed dramatically as I turned and headed down the long path, turning away from the Sherburn Pass trail.

The last mile and a half was a nice piece of trail, all downhill, but I was still tired, and my feet hurt.  I just wanted to sit down and roll over like a dog with my feet all pointed skyward.  Now that they knew I was close, the pain dramatically intensified.  One’s mind is amazing, and mine was fixated on getting to the Inn.  Anything standing in the way of its destination was negative and magnified by ten.  My feet were swollen and felt like wooden clubs.  My stomach struggled with bouts of cramps like food poisoning.  Every raindrop slammed into an eyeball.  Rocks the size of boulders.  Logic and reason paled in comparison to a hiking mind deprived of sustenance and warmth – and deprived after “ALL IT HAD DONE FOR ME!”  I was so ungrateful it whined.

I made it out to Route 4 and frowned.  The traffic was flying past me on this four-lane road, and there was not much of a shoulder.   I looked up the mountain and groaned in disgust.  It appeared I would be huffing it in the rain, back up the road a mile to the Inn.  The cars were a little scary as they flew past me, spraying fine waves of mist from the road into my face.   Anything that large and fast made me feel fragile and defenseless.  I walked with my head down, a guardrail on my left, and the white line a foot to the right, listening for the sudden squeal of breaks and tires as the next multiple tons of steel flattened me before the impact even registered.  At least it would be quick and painless.

I tried to focus on the asphalt in front of me, but I could not shake the images of road kill flashing through my mind. I soon moved to the other side of the guardrail, only to encounter several images and every other piece of garbage humanity could toss in the brush on the other side of the rail.  GAG!  I finally put in my earbuds, turned on “Game of Thrones,” and focused on kingdoms far away as I plodded toward Eden.

I walked through the door of one of my favorite places in the Northeast, and my stomach lurched at the smells of Guinness Stew that wafted through the air.  I looked towards the bar and saw Phil and Jess grinning back at me.  I had met them at a sheltered south of Avery Peak near Stratton Mountain, and they had caught up with me while I was on my two-week footrest break.  It was good to see them again, and they motioned me over to grab a stool next to them.  I slid onto the seat as I feigned interest in whatever they were saying, but my mind had already focused on the menu that the bartender was sliding in front of me.  I placed my order, told the two to give me a minute, and went to get a room at the Inn.  I wanted to ensure I had a place to sleep before I sat down to stuff myself for the evening.