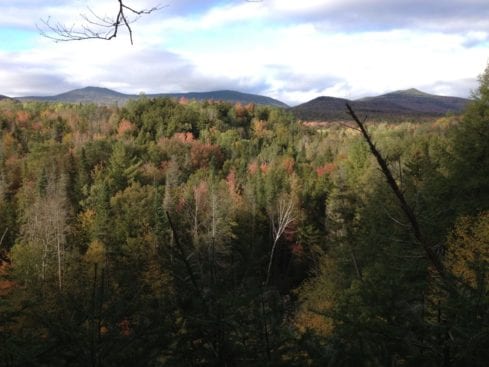 I should probably use the trail name “Empathic.”  If you were to go through my social media publishing, you would find long solitary hikes, constant sharing of orphaned pit bulls up for adoption, and limited social  interactions.”   It is not that I don’t enjoy the world of humanity, I prefer the simplicity of nature. Every so often, though, human interactions define my hiking experiences, and my stay at the Inn was one of those.

I was up reasonably early and eagerly headed down to breakfast. I was surprised to find a table full of other long-distance, early morning hikers. I sat with Jess and Phil, the couple I had met at the bar when I arrived last evening, and “Just Bill” from Whiteblaze, who was hiking the Long Trail southbound. “Just Bill” was an “expert” long-distance and speed hiker, at least, this is what seemed to be the case, based on the tales and advice we were provided throughout breakfast.

Honestly, though, saying I’m an “expert” hiker of any type is like saying I’m an expert at eating breakfast. There are so many ways of doing the same thing, and everybody’s “expertise” is based on their preferences. I could say I’m an “expert” at higher mileage days, but I like starting early and hiking until I’m ready to sleep. I’ve not found the magic calculation for hiking high miles, I walk all day long.   I could also claim expertise in maintaining low pack weight, but I’m lazy. I hate messing with water – the whole bladder thing, filtering, cooking, so I “camel up” at a water source and carry very little water on the AT. I also snack as I hike (mostly because I like crappy snack food) and eat A LOT of food while in town every handful of days since I hike higher mileage. Thus, there is no need to carry a lot of o water or food. Because of this, I don’t often give hiking advice to anyone unless specifically asked, and then I usually precede it with “Well, I prefer…..”

We all sat and got acquainted after we had ordered our food, and a few minutes later, I looked up to see an older woman standing at the end of the table, smiling down at us. Her smile was one of the most sincere and genuine smiles I had ever seen, and I glanced around the table to see everyone grinning back at her.   Caroline asked if she could sit with us, and we all immediately said yes and invited her to sit down.   “I just want to listen to you discuss your travels,” she said. “At 77, all I can do is live vicariously through the adventures of others.”  We all ate breakfast and sat and chatted for about an hour. I was leaving, Bill was headed home, and Jess and Phil were still debating their plans since it was rainy and cold outside.

I finally said goodbye to Caroline and headed upstairs to get my backpack. Once arriving back down in the lobby, I was told I had about 10-15 minutes before the bus arrived outside the Inn. I did not want to miss my ride down to the trailhead, so I headed outside to stand by the road. The wind whipped through the pass as I stood with my teeth chattering.   Winter was here, and I was still in Vermont.   I could feel the anxiety begin to build. I needed to get south before the brutality of winter set in and mountain snow began to fall.

I was getting colder and thinking about heading back to the Inn when I saw a van slowing. As the truck rolled up in front of me, the passenger window rolled down, and Caroline leaned forward to look out at me, grinning. “Hop in,” she said as I hurried to grab my gear. I climbed into the passenger seat, holding my pack in my lap. We had less than a mile to go, so I perched haphazardly on the seat, with all my belongings piled in my lap, waiting to hop right back out. Instead, we pulled into the parking area on the other side of the road a minute later. “Hike for me,” she said as she smiled wistfully and held out her hand. I smiled back and said, “I will,” as I grasped her hand gently. She radiated strength and grace, even if she could no longer hike the trails, and reminded me of how fortunate I was to do what I loved.

The temperature continued to drop as I hiked up towards Killington Mountain, and I was pretty frigid by the time I reached Cooper Lodge, even though I was climbing. I was in much better shape, and climbing was not providing enough exertion to offset the cold. I needed to try and warm up a little. I could hear people inside the Lodge that appeared to be listing left, and not only did I not want to be the final pound that toppled Cooper Lodge, but I knew it was not heated, and I did not have the energy to ramp up for human interaction. I continued hiking.

As I passed by the “lodge,” I glanced to my left and saw the “Cooper Pooper.” This was the name of the small composting outhouse. I took advantage of the little shelter and ducked in to get out of the wind if nothing else. As the door swung close behind me, the temperature immediately increased a few degrees – a natural composting heater. One good thing about hiking in the cold is that I am often congested, so I could enjoy the brief reprieve from the elements without choking and gagging during the break.   I relaxed and enjoyed the hiker literature on the walls for a few minutes before begrudgingly heading back into the icy breezes.

Coming down Mt. Killington, I was briefly reminded of the rocks and roots of New Hampshire. Fortunately, they did not last long, and I did not mind because the decline also resulted in a rise in temperatures.   I carried very few extra clothes on these hikes, so I often walked on the edge of being dangerously cold. I had contingency plans in the event I did get too hard (sleeping back, rain suit, thermals), but it took an awful lot for this lazy hiker to break out emergency measures. I usually kept moving and tried picking up speed to create more heat.

I made decent miles (about 17), considering the late start, and by the time I ended the day, it was much warmer than when I had started. The weather had also cleared, and I was back in the rolling hills of Vermont. I camped at the base of Beacon Hill for the evening. Then, I left the trail and headed off into the woods to camp, finding a flat space just past some power lines tucked in behind some deadfall between spruce trees. These big hardwood forests were much more open, making it more difficult to find some little out-of-the-way space to tuck into for the night, but my little nest appeared to be just perfect, or so I thought.