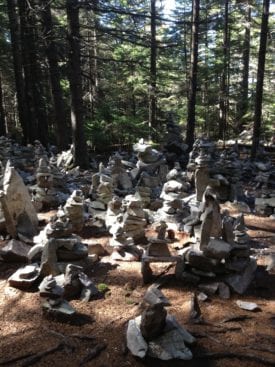 Last night was dominated by another large animal encounter. I guess the flat, open camping spots I chose were that way for a reason, and I benefited from the homesteading efforts of other large animals. I was dozing off when I heard what sounded like very large hoofs approach the tarp. I was startled and sat up suddenly, listening to heavy breathing. I immediately assumed a large deer but did not hear the harsh blowing that usually accompanies their conservative approach.

Thinking quickly, I used my weapons at hand, rattling my cuben fiber tarp and coughing very loudly. Undeterred, the significant something walked up to within inches of my tarp, paused, and then continued on its way. I was shocked my audible assault had not deterred the night being. I slowly laid back down, listening for a second assault, but only hearing the hundreds of other night noises spurred my imagination. Fortunately, I had trained myself not to wonder and to turn off my brain to sleep. I slept very lightly, but some part of my mind had learned to decipher the noises, and I was only awoken when the patterns changed.

The following day, after packing my gear, I walked over to the high weeds near the power lines.   The high vegetation had been mashed down into a rough, round nest. Something very large had rested there for the night.   I laid my hand in the middle of the nest to see if it was still warm and crouched, looking out through the tall grass, seeing where it was broken by whatever had moved away in the early morning hours. Sleeping near another “something” was a little unnerving, but this must be a safe place to rest, and that also gave me some peace of mind.

It was freezing, so I packed quickly and shoved a Big Sur bar into my rain jacket pocket. I carried a down jacket to put on at night when I arrived at camp, but during the morning, I often hiked in my rain jacket until I warmed up. It was a good wind blocker and trapped in my body heat, so I warmed up quickly.   I did not leave it on too long, or I would also trap condensation, but I left it on just long enough to warm me up.

I chugged a liter of water, threw on my pack, and headed down the hill, munching on my Big Sur breakfast bar.   There were a lot of hikers on the trail. I met 5-6 Long Trail hikers and several section hikers. This was a fantastic time of year to hike. The leaves were beginning to pop, and the next few weeks would be beautiful. Interestingly, all the hikers I met said the upcoming trail had terrible rocks.

NH had prepared me, and I was ready, so I waited, and waited…..and waited. The rocks I anticipated never appeared. The Vermont trail had zero stones compared to what I had encountered in New Hampshire.

As I climbed up towards White Rock, I came across the Cairn graveyard. I found the area a little creepy.   The cairns were like little silent voodoo dolls staring at me. I took a few photos but did not dilly dally.   I was probably breaking tradition by not stopping to build my cairn, but the rocky, silent statues, coupled with the silence of the surrounding forest, urged me forward quickly.

I headed down past Speck Pond and came across two section hikers searching for Speck Pond Shelter.   The two men were huddled around a map, and looked up as I approached. They asked if I had seen a side trail leading to the shelter. I responded that I had not, but sat down on a log to review my guide. I always welcomed any opportunity to stop for a snack. I told them I thought it was near the tenting area they said they had passed. I then threw on my pack and headed on down the trail. They hiked behind me chatting for a couple of minutes, and I tripped and stumbled through the rocks muttering expletives, as my ego pushed me on more quickly than I would have hiked if nobody was watching.   It was a good thing it was a short stretch of trail leading to the turn-off, or they probably would have doubted I really was the long-distance hiker I had claimed to be, when they asked me how far I was going.

I paused when we reached Speck Pond Shelter, and saw good camping, but as always, I moved on to find other more private camping. I always felt more secure away from people. It was beginning to get dark as I climbed up towards Baker Peak, and I scanned the mountain to both sides of the trail, looking for a clearing to set up my tarp. Finally, I saw a clearing through some spruce trees, and headed over to find a small open spot on the other side of some low hanging boughs. I wedged in between two trees, and although a bit lumpy, I was able to stomp down the ground into a relatively flat spot. There were only a few tiny saplings, and I was able to set up my tarp over them, and then arrange my sleeping bag in between the small trees.

I smiled in relief, as clearly man nor beast had used this camping spot. I should have a quiet night. I spread everything out, and prepared a peanut butter and jelly tortilla for dinner (or three). I grew up on PB&J, which was a staple for me when hiking. I ate quickly, and slid into my Feathered Friends bag. The night was going to be cold, but this sleeping bag was one of the best I had ever used. I had used many down bags over the years, and my go-to was either Feathered Friends or Western Mountaineering. If using quilts, I always used Nunatak. Both were very well made, and lasted a long time if maintained.