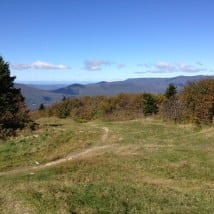 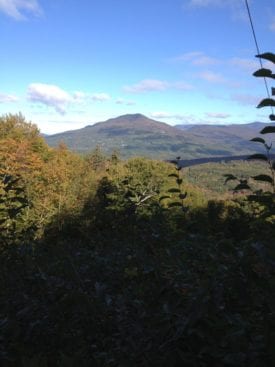 Curling up around trees, on hard little bumps of spruce duff, did not make for a good night’s sleep, so I was a little stiff and grumpy when I woke up.  I was up a little earlier than usual, so I packed up by head lamp in the pre-dawn darkness.  I enjoyed watching the day awaken around me as I walked – the grey dimness, brightening to a colorful sunrise, as the slow mist spread through the dark valleys.  If not too cold, I would often stop up on a ridge to watch the morning show.  I reminded myself to get more batteries in the next town, for my headlamp.  The days were getting shorter and shorter, and I was spending more and more time in the dark.

As I headed up to the top of Baker peak, I passed excellent campsite after excellent campsite.  This is one of the great phenomena of hiking for me.  I will hike until dark, desperately searching for a some little flat piece of ground to sleep on, as the night quickly darkens around me, only to find an abundance of fantastic campsites five minutes into the next mornings hike.  Today was no exception.

I reached the peak just before sunrise, and sat on a granite outcropping to watch a soft line of pink brighten above the morning fog, lying heavy in the valleys.   The skies above the ridges and valleys was perfectly clear, and I knew it was going to be a beautiful day for walking.  This weather was why I walked south through New England in the fall.

The first climb over Peru peak was relatively easy, but I could feel the previous day’s miles in my legs, as my feet snagged on invisible roots under the crisp fall leaves that covered the trail.  I love the foliage but find myself having to peer closely at the piles of brown husks that cover the trail, hiding obstacles just waiting to send me sprawling.  I reached Mad Tom Notch and stopped for lunch.

The climb over Bromley went quickly, and the treeless peak, with turn in circle views, was breath taking.  This was a ski resort during the winter, and I snooped around the buildings looking for a spigot for water, but finally gave up the search.  I had not been able to get water from the pump at Mad Tom Notch.  I had heard a building was left open for thru-hikers, but I was not in need of shelter on this perfect day, and turned to head quickly down the mountain towards Manchester Center, VT.  It was a “town day,” and visions of steaming food were already filling my head.

I had just started down the ski slope when I was startled by a large dog rushing past me.  He had the entire mountain to run, but bumped my legs as he galloped down the mountain ahead of me.   He did not look back directly at me, but about 20 yards ahead he paused to stop and turn slightly towards me, peering up the mountain past me.   He did this for about the next half mile, never giving me his direct attention, but pausing to make sure I was still following, and letting me know he was waiting – on his terms.  He was a beautiful dog, noble and aloof in his bearing.  He was probably one of the larger Vizslas I had seen.  I had met a small pack hiking a few weeks earlier, but they had been about half his size.

A few minutes later, a couple out day hiking with their Golden Retriever walked up the trail towards me.  They asked if he was my dog, and when I said no, they said his owner was looking for him at the bottom of the mountain.   We chatted for a few minutes about my hike, and when they realized I was a thru-hiker they pulled out their map to see when I would reach Bennington, VT.   They to offered me a place to stay, and I smiled politely before telling them I was probably not stopping in Bennington.   I explained that winter was quickly gaining on me and I wanted to get below the northeast “blizzard line” before it was too late.  They understood, but gave me their number and left the offer open.  I’m always amazed at the generosity of strangers that I meet along these hikes.

The couple had a phone, and called the owner at the number on the Vizsla’s collar.   They explained to the owner that I was a hiker going into town, and would bring the dog down with me.  The owner said that if I would walk his dog “Atilla” down the mountain, he would take me into town.  I did not hesitate….DEAL!   The kind couple offered me their leash, explaining that I could leave it on the tire of their car when I got down to the parking area.  I assured them I would leave it on their car, and Atilla and I headed off for the parking area a couple of miles away.

In some sections, I jogged to keep up with the long legged hound, and he would always stop just before pulling me to the ground.  The only exception was the two times he leapt after a chipmunk, and I went flying.  I think he may have looked a little guilty as I pulled myself up out of the leaves.  The only other minor issue was having to dodge every other bush he felt the need to mark.  Apparently he was not neutered.  The owner later told me he was nine, and had come into his own of late, having very recently started roaming with the ladies. This was why he was having trouble keeping him home.  I saw no “ladies” on Bromley, and suspected he roamed often, just to roam.  This was later confirmed by a trail maintainer who told me she had seen him the last four times she had hiked up the mountain.  It all made sense…why walk your dog when you can just let him loose and have everyone bring him back to you, on a very popular hiking trail.

John (the owner) met me coming up the trail, as I was walking down.  I knew he was Atilla’s human, as soon as the big dog dropped his head and resorted to his aw shucks body language, wiggling his whole body harder and harder as his man drew closer.   John dropped to one knee and rubbed Atilla’s ears, feigning disapproval of his “wandering.”

We jumped into John’s truck and headed into town.  I had picked the motel where I was staying, from my guide, even though John recommended another one about a mile further outside town.  Walking distance determines where I stay, and I was definitely not adding a mile to my town chores trek.  We stopped by the Post Office to get my box, and then he took me to my motel and dropped me off.

The town was a little spread out and it was later in the afternoon, so I showered quickly and headed out to begin my chores.   I needed fuel for the walk, so the first thing I did was stop by a very good little Mexican Restaurant.  The Laundromat was next, followed by the grocery store, and by then my first meal had been digested.  I stopped by a Chinese restaurant to grab take out, and started the mile or so walk back to the motel.  Once in the room, I packed up to head out the next morning, and then sat down to eat while I stared at the fast moving pictures captured in the big black box.

It would be good not to move for a few hours, and just wallow in a food coma, on a very soft surface.