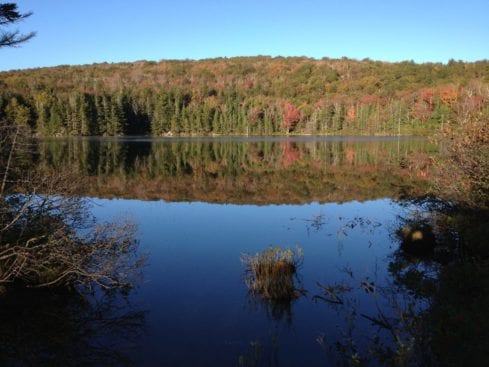 I packed everything, slung my pack over my shoulder, and headed for breakfast. “Up for Breakfast” had been recommended several times, and I eagerly searched this little recommended eatery, even the breakfast fan or almost any food fan.   Moving quickly down the sidewalk in the crisp early morning air,  I spotted a couple at the bus stop.   Thru-hikers can spot thru-hikers immediately.  We have that slightly worn, tattered appearance.   They were Japanese and lived in New Zealand (Bear & Kiwi). They spotted my pack and grinned at me, huddled around their coffee cups as I approached.  They had done a flip-flop hike and finished up in Manchester Center.  They were now headed to NJ before heading home.  We chatted for just a few minutes before my stomach growled.  We wished each other luck in our travels, and I turned quickly to gain speed and generate some heat.  It was definitely a chilly morning.

Breakfast was good, and I had fun chatting with the waitresses, but “Flapjacks” in Lincoln, NH, still has the number one spot, hands down.  It is the best breakfast spot I’ve eaten on a long-distance trail.

After breakfast, I walked down the sidewalk for a few minutes with my thumb out.  I watched a truck approach me, pass, and do a sharp U-turn.  A man pulled up, rolled down his window, and introduced himself as “251 Big Dog.”  I thought he was giving me his CB handle, but it was his trail name.  He was a really nice man, retired with his family in Manchester, and seemed excited to give me a ride back to the trailhead.  Upon arrival at the trail, he came around the truck to shake my hand and wish me well.  It was like being back down south to experience such cordial manners.

The meteorologist had apparently missed the course on “Mountain Weather.” The beautiful warm, sunny day was overcast and cloudy, and I even got sprinkled on as a little extra icing on the cake.  I frowned up at the steely grey sky as small hard ice pellets pelted me in the face.  Hopefully, it would clear up.

Several section hikers asked me about the weather for the next few days.  I said, “Take what is occurring and assume the forecast is the opposite.”  This answer did not seem to be a well-received response, which was surprising since it was sleeting on us, but I’m sure vagueness is not welcome when you only have a few days to take advantage of hiking.

I was surprised at the number of hikers I met with dogs.  I am a dog owner and lover, and I will get yelled at, I’m sure, but I love to meet them on the trails and don’t mind them off-leash if the owner can control them and they are friendly.   Most of the dogs were on leashes, and in several instances, that was probably a good thing.   Most appeared to have their owners out for a walk.  One large mixed breed was growling and showing off his canines as he lunged toward me.  The owner told me to “Walk on by.   He is friendly.”   I said that I was not until Mr. Happy quit smiling at me.  The owner became irritated and circled me through the woods, huffing and puffing as fluffy continued to lunge and bark.  Some dog owners really should not be dog owners.

About an hour later, I met another pack of singing Viezlas.  They all three had on their packs and looked like a pack of spindly-legged goats coming towards me on the dirt road.  When their owners stopped to chat, they became restless and began whining and singing to keep moving. They were all lovely and very vocal.  They were enjoying their journey with their pack.

The climb up Stratton from north to south was a nice moderate climb.  There was a fire tower at the top, so there were good views.  There was also a tiny cabin where two maintainers supposedly lived.  They must have had a very close relationship because it was a tiny cabin.  I was not up top long.  It was cold and misty, and I needed to keep moving to stay warm.   I stopped and bundled up when I reached Stratton pond.  I was stopping for lunch and wanted to stay warm while I ate.  Now that I was in shape and had lost another 20 pounds, it was much harder to warm up without practically jogging, which was dangerous in the thick trail leaves.   The pond was gorgeous.   Fall colors were starting to emerge, and the pond reflected the vibrant leaves.

The rest of the afternoon was nice, uneventful hiking up over Stratton and down to Black Brook, where I stopped for the night.  I met Drifter, who was camped on the other side of the Brook.  There were nice sites around the little stream, but I debated setting up.  I knew I would have a wet tarp the next morning.  I finally relented to my fatigue.   It was getting late and well past dusk, so I crossed the brook and set up for the evening.

Drifter was on the other side of the creek, and there was always a certain sense of comfort when another hiker is nearby.  I avoided groups, roads, and shady folks. Still, my intuition and Spidey sense had not yet let me down yet, and when I chatted with Drifter, I determined he was another backpacker who loved being outdoors and was generally good.  I would sleep well next to the rushing water.