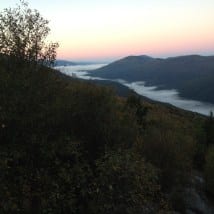 I grimaced as I shoved my soaking wet tarp into my pack.   I loved camping near rushing water, as it always lulled me into a deep sleep, but I always regretted the decision the next morning.  Many of my hiking decisions were based on immediacy and not on strategic planning.   I hiked from dawn to dusk, so by the time I arrived at dusk, although the whisper of a poor decision was always in the back of my mind, the scream of my feet and stomach always prevailed.

I paused on the bridge over the creek, still waking up in the grey morning light.  I could see Drifter’s tent fabric trembling as he moved around inside.  I shouted out to him to have a good hike, and he responded back to me with the same.   Stumbling down the trail, I was surprised this morning’s hike had so many roots, rocks, and mud – flashbacks to New Hampshire and Maine.  There was really no comparison though, as I was only using two limbs for this hiking, and not all four.

The trail passed right by Goddard Shelter, and it was still early and chilly, so my intent was to pass on by without stopping.  As I rounded the corner, I was startled by another hiker that stepped out in front of me.  He introduced himself as “Oatmeal,” and immediately stated he was a section hiker.  He then promptly asked my trail name.  I was tempted to say “Milk,” but instead told him my real name.  Suddenly, a voice responded from inside the little building, “….and she is on TJ and does not keep her journal updated.”  I turned towards the shelter, and walked around to the front of it, saying “Bob Martinez” at the same instance I saw him.   It is interesting how the mind leaps to put the pieces together, and respond, before you are even aware sometimes.  Bob had signed my guestbook a couple of weeks back, and told me he would be hiking this section.  My self had not remembered, but my subconscious had jumped forward to apply the pieces to the voice, and say “hello.”

I grinned at him, and sat down while he finished his early lunch.  We chatted for a few minutes about common hiker topics – gear, length of hike, destination for the day, food, etc.  Bob was a nice guy, and I find it interesting to combine faces and names.  I am very visual and immediately “create” a face that rarely fits, but Bob looked exactly as I had imagined.   I watched him pack back up, as we sat talking, and was impressed with the size of his pack.  He clearly had his gear dialed in, and hiked often.   The pack was small and compact, and he moved quickly, knowing where everything was located.   I think he also recognized my desire to keep moving, so our discussion was fairly brief before we wished each other well and headed north and south.  Sometimes it is nice to meet people that follow your blog/journal, and other times it is a little creepy.  This time it was definitely nice to meet another hiker.

Continuing on through the early afternoon, I was reminded that the fall is a popular time of year for hiking, and this day was to be no exception.  Shortly after leaving Bob, I encountered a couple hurrying out of the woods after a poor night’s sleep.  They looked around nervously as they paused to tell me that a bear had circled their tent all night, as they huddled in terror.   It had blown and circled, blown and circled.  They had not actually seen it, but it had definitely been a bear.  I did not think they would appreciate me telling them that it sounded much more like a curious deer, so I just frowned, looking appropriately concerned, and then watched as they hiked away quickly, glancing side to side

As I moved closer and closer to Route 9, that led into Bennington, VT, I met more and more hikers.   Coming around a corner, I skidded to a halt in front of three 20-something girls with GIANT backpacks.   They stood looking worried, and without a hello they asked me how far it was to the next shelter, and what time I thought they would arrive.   It was already late and they looked a little frantic.  I stood for a moment contemplating the appropriate response.  They would never make it to the next shelter before dark, but I had passed a great campsite about a half mile back.   I told them they had “a ways to go to the shelter,” and they responded that they had headlamps.   I then told them about the campsite, and they just frowned.  As I moved around them, and headed on down the trail, I heard them debating “sleeping out in the woods tonight.”  I had a feeling that if they did make it to the next shelter, they were probably going to be a little disappointed with the sleeping accommodations.

About an hour later I met four more guys with even larger packs headed for Hell Hollow Creek.   As they walked up to me, they asked me the distance to the shelter, and sunk to the ground in exhaustion as they asked.  I suggested they go the mile to the shelter I had just passed, but they were determined to get to the creek.  I then told them the bridge was out, and they would have to work their way across the creek, and as I walked away I  heard “shelter” being tossed around.   First time backpacking trips are always memorable because of the constant adjustments that will have to be made.  The pain and effort of a first hike will eventually fade, but the unexpected events of those hikes are always remembered.

I finally reached Route 9, and stood staring down the road that led into Bennington, VT.  Traffic flew past me on this busy mountain road as I stood there imagining hot food, a warm bed, and more hot food.  I did not need supplies, but was weak when it came to resisting my stomach.  I called home to distract myself, and chatted for about a half hour, as the afternoon grew later and later.  Not a single car stopped to ask if I wanted a ride, so I took that as a sign, and crossed the road to resume my hike.   Maintaining discipline and miles is one of the hardest parts of the Appalachian Trail for me.   The towns are so close, and it is very easy to head into town for a quick meal, and loose a day or even two days, to all of the comforts off trail.  It is much easier to make miles out west.  Trips to town take effort, and towns are not often close to the trails.  You are often going from town to town with no towns in between to deter a hungry hiker.  The Appalachian Trail has so many towns, that in the 3-5 days between target towns you pass three or four other towns, not to mention the hostels.  The Appalachian Trail can become a very expensive trail.

I reached the base of the mountain leading up from Route 9, and began to climb.  Fifteen minutes later I paused to look up.  This was one massive staircase that seemed not to end.  I lowered my head and kept climbing as it got darker and darker.  I should not have stopped so long at the road.  This climb seemed endless, and I needed to begin looking for a place to camp before nighttime.

By the time I reached the top of the climb, it was pitch black dark.  I could follow the stone steps of the trail in the dark, but now I paused to put on my headlamp.  The light from the headlamp barely penetrated the thick dark, old growth forest, and once the trail leveled out at the top I turned right and wandered off into the trees slowly, with my light pointed down until I came to a flat spot covered in pine needles.  I would never have done this in Maine, but the woods were wide open here, and I would not have any problems finding my way back to the trail the next morning.

I quickly pitched my tarp and climbed in for the night.  I had stopped to eat earlier, so ate a quick pouch of tuna and settled in for the night.  I always ate protein before going to sleep.  It seemed to help my muscles recover more quickly, and since I had begun following this routine, I had found I slept better, and my legs were far less fatigued the next day.