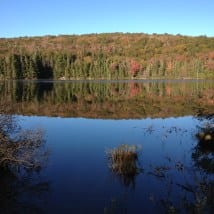 About an hour after falling asleep last night, the “Farside” cartoon showed up.   Deer repeatedly charged my tent, blowing and stomping.  I had this vision of them lined up and taking turns, with smug grins on their deer faces.   They repeated their antics for hours.  At one point I sat up and screamed obscenities at them, before fumbling around for my earplugs.

I was up early the next morning, and the sunrise from Harmon Hill was fantastic.   I hiked down a side trail to get some good pictures.  I usually get up before the sun rises, so I often try to camp near the tops of peaks or ridges so I can catch the sunrises.  It is often a little dryer, and sometimes warmer, if I camp a little above the settling air.

As I continued on into the morning, I left “Vermud” and entered “Massquitoe.”   I sighed as I dropped in elevation and received my first bites in weeks.  I was sure the fall temperatures would have chased off the critters, but I was wrong.  I was also surprised by the rocks, and even had to rock pick down a short NH rock slide.  The difference in the MA rocks was that they had these crazy sharp edges on them.  They were a little scary actually, like hiking over angled razor blades, so the hiking was slow and tedious.

I headed for North Adams later in the afternoon, and just outside of town I paused to watch two black weasel like animals come running down the trail towards me.  They were not squirrels.   I really don’t know what they were but watched them chase each other through the woods…maybe minks?

The road walk, as I headed through the suburbs for my next mountain, was tough on my feet, but it went by quickly.   I relaxed my pace through the neighborhoods, saying hi to those out in their yards.   A few people offered me water, but I declined.  I was not thirsty, and definitely did not want to carry any more water than I needed.  I usually just “camel up” as I hit springs or creeks, and don’t actually carry much water.  This is one of the benefits of the Appalachian Trail – water sources are fairly frequent.

As I headed through the streets, I looked up to see a rather large mountain in front of me. Reaching the other side of town, I pulled out my profile map and saw it was Mt. Greylock, the highest mountain in MA.   I sighed in frustration.  I had not checked my maps for the day.  I usually study my hike for the day, since large climbs are largely mental.  I like to anticipate and obsess over the climb for hours before reaching it.  By the time I arrive, it has grown in epic proportions, and is far less of the challenge my imagination made it out to be.

I climbed about three miles before starting to look for a campsite.  There was nothing within site of the trail, so I headed off trail until I found a small shelf about 100 yards down from the trail.  I had wanted to make it closer to the top, but there appeared to be camping restrictions, which I thought I may have already been within, so I tucked in behind a large log, and settled in for the evening.  I was excited, as I believed I had read there was a breakfast joint up top.  My stomach would be getting me up early.