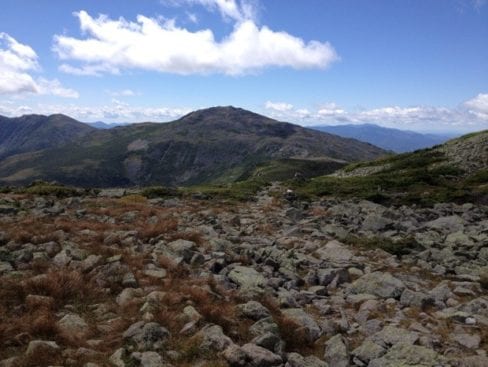 I thought Osgood was a crappy little camp site, but it ends up I was actually just camping at a crappy little camp site about a half mile from Osgood.  I would later learn that the AMC had not lowered there standards as drastically as I had thought, but as I rolled back and forth all night on the slightly slanted ground, snoozing between the rolls down hill, and continuously peeking out under the edge of the tarp for the light grey of the approaching dawn, I did mutter a few not so nice things about the behemoth that had monetized the White Mountains.

I was up very early to begin my climb up Madison.  It was not that bad a climb until I reached tree line.  Over the next 8.8 miles, I picked my way carefully across boulder fields with large wobbly rocks, that not only required careful foot placement, but demanded mental focus on something other than where the next water source was located, or if it was time for a snack.   I literally walked across loose rocks and boulders almost the entire way to the turn off for Madison Hut.  Every thirty minutes or so I would freeze, balance myself, and gaze out at the unbelievable views.  A large gust of wind would then knock me off balance, and I would resume my intense lock and load stance as I focused on my feet. 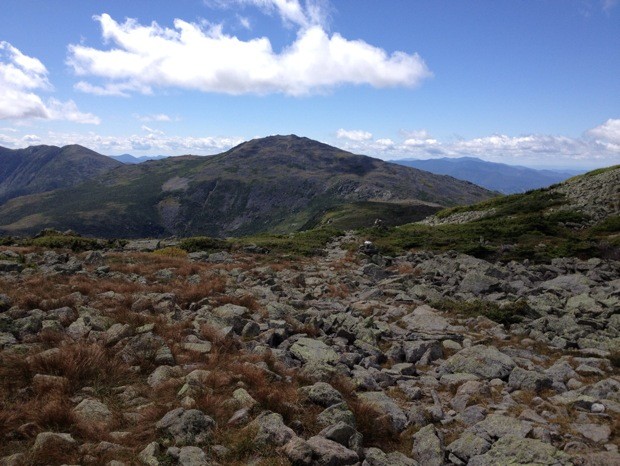 This became tedious after about an hour, and that was when I made a critical mistake.  As I picked my way over the top of some especially loose, sharp, pointy rocks, I glanced ahead, only to feel the rock I had just stepped on shift under my foot.  My body lunged forward, and images of crushed face bones flashed through my mind as I headed face first towards the field of rocks.   I thrust out my arm, cringing as my hand slammed down on a rock, and I felt a sharp pain shoot up my wrist.

Although my wrist was throbbing, my ego was firing on all cylinders, and I slowly rolled over, and looked around, to see if anybody had seen my graceless swan dive.  Seeing no other hikers, I laid back on my mattress of stone, and moaned out loud as I cradled my hand.   Jeez it hurts, I thought as I lay there feeling sorry for myself.  It was time to move though.  I had no time to lay there and be found by a group of day hikers, so I rolled sideways, unfastened the backpack that was strangling me with it’s chest strap, and slowly slid out of it as I sat up and then stood.

I continued my graceless rock maze wobble towards Mt. Washington, frowning as my wrist ached more and more.   The pain had localized, and my wrist had swollen to the point that it was noticeable.  I was frustrated.  I should have known better than to let down my guard.  Then I saw Washington, and thoughts of hot food overrode the pain.  I was pathetic.  As I drew closer to Mt Washington, the trail leveled out, and the rocks began to recede.  I grinned as the building with the food bar came into view.  Clearly, my wrist was not too bad. 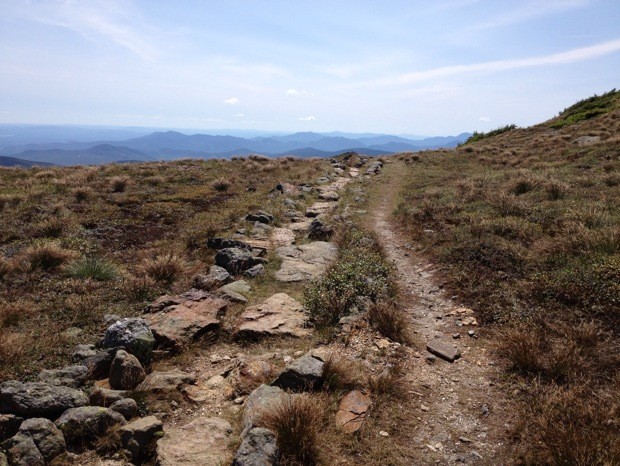 I reached the summit and made my way over to the snack bar, where I ordered two hot dogs with everything on them.   My wrist still hurt too much to use, and people stared at me as I ate a chilly dog one handed.   Chilly dribbled down the front of my shirt, and all over the table, but it was so good!  Let them stare.  They were just jealous they did not have the nerve to eat so freely, or clearly enjoy their food as much.  Forget about anesthesia.  If I ever need minor surgery on anything other than my mouth, and a free hand is available, just hand me a chilly dog and go to work.

Once I finished eating, I dragged my pack onto my back with my one free hand, and headed outside to figure out how I would get into town.  I walked over to the parking lot, and looked at the sign that said “No Hitchhiking.”  I would not hitch, I would just wait and look pitiful.  I dropped my pack by the path above the lot, and sat on it.  Just a few short minutes later, three men I had met earlier on in the day, stopped to say hello.  They asked if I wanted a ride down the auto road into town, and I happily said “yes!”

I was dropped back off at “Hiker’s Paradise,” where I sheepishly said hi to Bruno, and paid for another room.  I dumped all my gear, and headed out to go find ice, for what I hoped was just a sprain.  It was late in the day, and there was no time to go have my wrist checked, so I headed back to the room to soak my wrist with a towel of ice, and a pint of frozen Ben & Jerry’s.  I would go find a Doc in the Box the next day, but for now I would just wallow in pity and icecream.