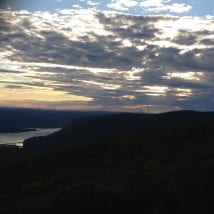 I expected rain last night, so I had found a great leafy spot on high ground to set up camp for the night.  I pulled the tarp tight and made sure my sleeping bag and backpack were covered.  Even though my gear was under the tarp, it was near the edge, and back splash from heavy rains would often spray up under the edges of the tarp.  I spread my pack cover over the outside of the back pack, and wrapped my rain jacket around the foot of my sleeping bag.  Bring on the torrents!  I was ready!

I woke up dry as a bone.  Not a single drop had fallen, and I was almost disappointed.  I loved to test my gear against the elements.  The elements often won, but I learned a lesson almost every time.  I guarantee that if I had cowboy camped, I would have gotten soaked!

I waited for the rain all day, and targeted the RPH shelter for lunch, so I could eat in a dry space.  I arrived at the shelter to find a couple of guys hanging out.  I had passed a friend of theirs just before arriving.   He had been wearing jeans and a cotton sweater, and told me his two friends back at the shelter were south bounders, and taking a zero day at the shelter.  I’m still not sure where he was going, as I did not see him again.  One of my first trail lessons, at a very young age, was NO JEANS and NO COTTON, so I found his clothes a little odd, but I sometimes ran into a little bit of odd on the AT.

His two friends at the shelter were clearly settled in, and offered me a leftover piece of pizza they had ordered.  One of the unique things about this shelter was that there was a nearby pizza parlor that would deliver.  I smiled and declined politely, and told them I had just stopped in to sign the log.  My “move on meter” was sounding loudly, and I just wasn’t feeling the connection, so decided to head on down the trail.

The rest of the day’s hiking was nice, and pretty uneventful.  One thing about the Appalachian Trail though, was that I could count on humans to keep me on my toes, and step in if things began to get too tedious, and as the day drew to a close, I came out on a gravel road in Fahnestock State Park.  There were two cars parked in a pull off, with one pulling away as I stepped out of the woods.

As the first car pulled away from in front of me, I looked up to see a fella sitting in a fold up chair grinning at me.   I was going to hook a right and head back up the mountain, but as Jack sat there grinning at me, I felt rude just doing an about face and climbing away without saying hello.   I said hi, and walked over slowly.  Jack asked if I was a thru-hiker, and if I wanted some chocolate.   I said sure, and watched as he walked around to the other side of the car.

Jack pulled out a pack as I watched, and chatted about how he came every day to sit on the road and read, talking to hikers as they came down out of the woods.   I had so many questions, but did not even know where to start, so I just smiled.   Pulling a foil candy bar wrapper out of his day pack, he broke off two small squares of chocolate and handed them to me.   I smiled and tucked them into my shorts pocket, saying I would save them for desert.   The thru-hiker in me wanted to pop them into my mouth immediately.  The single female meeting a strange guy in the middle of nowhere, handing out candy, would toss them into the bushes once I was 100 yards up the next mountain.  He seemed like a nice guy, but better safe than sorry had always been my motto.

We chatted for about 5 minutes, while I knelt down to pet his Lab.  I was a sucker for most any dog, or animal for that matter.

Jack informed me that there was a great tent spot just at the top of the next hill.  I made sure I hiked about 2-3 miles past that spot, and stopped right at dark.  Off to the right, there was a grove of young trees, with no wind snags to impale me while I slept through a storm.  I nestled into the back side of the grove, on top of some soft grass and leaves.  This was a great storm location, and far enough off the trail that nobody would see me as they hiked past in the night.  I usually camped out of the sight of the trail.

One again, I was rain ready for the rain.  Bring on the monsoon!