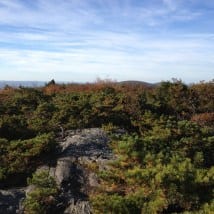 I slept hard, not remembering waking up even once. It was the kind of sleep where you wake up with a numb limb and drool caked to the side of your face and onto your pillow, or in my case, my jacket. I slept in about a half hour later than usual, rising slowly from the fog of that rare, perfect sleep.

Even with the late start, the morning hike started early, and I began slowly, letting the stiffness of the night before slowly seep from my muscles. Grades were pleasant and moderate, with some lazy hills rolling through wood and field. As I strolled through their pastures, I saw a few people chatting with the cattle. They stared back at me with their expressionless bovine faces…maybe a few slight expressions of interest, very little.

I arrived at the road into Wingdale, NY, late in the morning. I knew it was not legal to hitch in NY, and as the day progressed, I began to understand why it should probably be avoided in that area.

About ten minutes after putting out my thumb across the road from Native Landscapes, I was picked up. I had noticed a brick oven pizza stand across the road and to the right of the landscaping business, but I did not sprint across the road towards the food with incredible willpower. I wanted to resupply quickly and get out of town. Fall had arrived, and I was still in New York state. Georgia was a long way south, and I wanted to finish this trail before Christmas.

Ten minutes after sticking my thumb out, a Town Car pulled over. I peered in the window, and Richie grinned back, asking me where I needed to go. As we chatted, he said he had never heard of the Appalachian Trail and then proceeded to ask me if I was hitching around the country. I tried to explain that the Appalachian Trail ran up the eastern part of the country from Georgia to Maine. Still, I had trouble getting in a single word around his ramblings and finally just threw in the white flag and agreed I was wandering around the US.

Five minutes into the ride, Richie was on topic thirteen. This included his requirements for finding a suitable bride and how he could not locate one. Unfortunately, this appeared to be the topic of most interest for him. I changed the subject briefly to hunting and based on the contents of his back seat, I hoped this might distract him from bridal discussions, but on the marriage topic, he was pretty focused. Thankfully, the ride to town was quick, and by the time he managed to steer the conversation back to brides again, we were at the small market listed in my town guide. I thanked Richie for the ride, grabbed my pack, and quickly exited the car, pretending not to hear him ask me if I needed a ride back.

I pushed through the glass doors of the small market and paused to stare down the aisles. The market was rather eclectic with every type of grocery item, some of which appeared to have been on the shelves for years. It was just a step away from an old mercantile store.   Unfortunately, not many supplies were conducive to a no-cook diet, so I began scanning the shelves for semi-cooked, canned goods. My pack was going to be HEAVY!

I perked up as I spotted a deli counter beyond a small seating area, but as I walked towards the counter, there appeared to be no contents behind the glass. I was surprised to see a man behind the counter and asked him if hot food was available. He nodded a confirmation as he peered suspiciously at my pack. Hikers were not typical in his world.   I looked at the limited menu behind the man and asked for a cheeseburger. He announced, “We are out,” and just stood staring at me. I then worked through about three more requests with the same response. I finally just looked at him and said, “What exactly do you have?”  “We have a Chicken Parm sandwich and French fries,” he said. I was not picky. “I’ll take the largest of both,”  I responded.   He nodded and turned to walk through a door behind him.

I found a small table towards the front of the store and dropped my pack on top of it. I wanted to put it where I could watch it while I shopped. I headed towards the grocery aisles, where I purchased about 30 pounds of canned goods, and then went back to figure out how to cram them into my backpack. I would work for my food, but I would eat well.

Arriving at the table, I found my sandwich and the best fries I think I’ve ever had, waiting on me. I sat down to eat and watch CNN, the only thing playing on the television, and unfortunately no remote to provide me some relief. A man wandered over with a bottle of tea and asked if he could sit with me. I quickly realized he was the owner. He was interested in my hike and had not owned the store long.   We started with the standard “Where are you going?” questions and then steered towards the “What do hikers want?” questions. I also explained the guides and how I had found his store.

I was there for about an hour before saying my goodbyes and heading back to hitch a ride back to the trailhead.   Eyeing the busy intersection, I decided to walk past the corner before attempting to hitch a ride. Over the next 15 minutes, I had an empty can thrown at me, and a father in a mini-van with his family, including small children, made ugly gestures at me. I was rather shocked and decided to forego hitching and start walking.   I would walk back the three miles.   It seemed safer. Five minutes later, I cringed and heard a car pull up behind me. I vowed never to hitch in NY again. I glanced back to see a yellow taxi van slowly stopping behind me. The female driver asked where I was going and offered to give me a ride for $7 bucks. I was thrilled! It was a short ride but well worth the seven dollars required.

Once arriving at the trailhead, I headed over a bog, and a small mountain, before beginning a steep hike up from the next road crossing with my canned goods and a full belly. I was still a little rattled by my hitching experience, but as I headed back down the other side of the mountain, I met two section hikers coming up. They were from Alabama and were charming guys interested in my hike. It was fun chatting with them for a few minutes and reconnecting with some pleasant, like-minded people. They reminded me of why I enjoyed these hikes.

I hiked until dusk, found a nice place in the woods, and tucked in for the night.   I had begun daydreaming about my cans of Chef Boyardee about an hour earlier and sighed in pleasure as I gulped down my first ravioli. I had not eaten like this since I was a kid, bringing back warm memories of home long ago. After that, I knew I would sleep peacefully again.