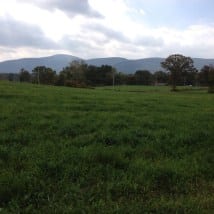 I was up bright and early, ready to move, so I packed up quickly and headed down toward the manager’s office.  I looked through the office window and into the eyes of the owner staring back at me.

I pushed open the glass door to the office and smiled a good morning as I headed towards the coffee machine.  The owner mumbled something about not making any and looked back down at whatever he was reading behind the counter.  “No problem,” I said as I turned toward the counter.  “Can I get a ride back up to the trail?”  He glanced up at me with a slightly confused look on his face.  I recognized that look.  I often received it at home when trying to get someone to go hiking with me at 7 AM on weekend mornings.

“Your wife said you would take me when I checked in last night,” I said in my most perky, upbeat voice.  Resignedly, he gave a big sigh and nodded slightly as he motioned me towards the doors and a well-used van parked out front.

The ride was quick, and he was not a morning fella, so few words were exchanged as we drove back to the trailhead.  I grabbed my pack, thanked him again for the early morning ride, and hopped out of the van.

I was surprised to see a few blowdowns from the previous night’s storm, but I hacked my way through with my Gerber and continued up the trail.

Today was a river walk, traversing a flat, winding trail that wound along the Housatonic river for about five miles.  Apparently, the ease of this trail section irritated the trail maintainers because, near the end, the trail took a 90-degree turn and headed straight up a long boulder scramble to St. John’s ledges.  As I pulled myself up hand over hand through the large boulders, I had flashbacks of Maine.  The biggest difference was that I could walk over the large rocks instead of water bugging across them on all fours.  My balance had definitely improved.

At the bottom of the descent from St. John’s rocks (there were no real ledges), I stopped at the field next to the road that led into Kent, CT.  I spread out and ate lunch in the sun. It felt great to spread out in the grass, strip off my sweaty socks, and stretch my feet and toes.  Unfortunately, though, it was a cut hay field, and I kept getting stuck by hay stalks as I tried to shift around in the grass and get comfortable.   By the time lunch was over,  I had a nice rash and scratched my way all the way up the next mountain.

I stayed up on the ridge for about a half hour, descended from the mountains onto a dirt road, and headed down the road for a bit before crossing over to pick up the AT as it wound back alongside the Housatonic.  It was a beautiful stretch of hiking, made even more pleasant because it was late afternoon, my favorite time to hike.

I was shooting for Ten Mile River shelter.   I wanted to sign the shelter log since I had not signed one recently and then find a place near the shelter to camp for the night.

As I arrived at the shelter, I saw a man standing out front dressed in orange.  I mean completely in orange – like a big pumpkin orange.  He was obviously taking no chances during hunting season.  He grinned at me as I walked up to him and said he had been there all day and was beginning to worry he would see no people.  His demeanor, and the excitement in his voice, told me he was probably very social.

He explained he was a SOBO and had been bouncing around on the trail since April.  I listened for a few minutes but could never figure out where he had started.  He may have mentioned something about the Poconos and the Berkshires, but I was confused.  I smiled and headed towards the shelter, with him following along behind me continuing to explain his journey.

Orange fella had cleaned up the shelter and told me there was plenty of room for me to stay there.   My intuition kicked into gear, and I told him I preferred to set up my tarp nearby.  Honestly, I would probably have set up my tarp even if he had not been there.  The orange guy then said it would be a cold night, and the shelter would be warmer than a tarp.  I did not point out that the shelter only had three walls and might not hold the heat he expected.  I did not want to appear argumentative or unappreciative of his gracious invitation.

I smiled and headed around the shelter to find a site to set up, and he followed me and watched as I set up my tarp and spread out my gear for the night.  He stood behind me the entire time I unpacked, explaining how I would most likely flood if it rained, as he had known someone with a tarp like mine, and it always flooded.  He added that it would also rain tonight, and the shelter would be dryer and warmer.  I told him I would come over to eat dinner with him but would stay on the tarp.

I went to find the privy and stopped to sit with him while I ate.  As soon as I sat,  he whipped out five pounds of large paracord bracelets he had made and told me to pick one. I chose one to be polite and put the half-pound bracelet in my pack.  He explained he made these when he got bored.  He had a good bit of free time on his hike.  Maybe he was the smarter hiker, ambling along at a reduced speed and enjoying his time on the trail.

The orange hiker shoved his bracelets back into his pack and pulled out a canister of Blueberry Brandy.  He asked me several times to try the Brandy, and I finally gave up on politely declining and said, “I don’t drink.”  He seemed a little put off by this, said he respected my decision and did not ask again.  As a matter of fact, he seemed a little subdued after I declared sobriety, so before things got awkward, I wished him a good night and headed back for my tarp.

I laid back under my quilt, wishing I had camped further away, and opened my Gerber, laying it next to the front of my tarp, within easy reach.  He seemed like a nice enough guy, and I was always careful, but tonight I had not been as careful as I usually was.

I think it took me about 3 hours to fall asleep.