A small bell tinkled as I walked through the small shop door. Out on the sidewalk, bright splashes of reds and greens caught my attention and drew me into the small art gallery.

Studying the small watercolor, I remembered it was my Dad’s birthday.

Buying my Father a gift was not easy. I did not know him well and was not sure he would like the painting. I knew my grandmother would love it, though, so I hoped Dad would also. Years later, I remember visiting him in Florida and seeing the painting framed and hanging in his house.

I did know that my father was like his mother. They both loved nature and the outdoors. I remember watching my grandmother on late summer afternoons from the deep shadows of the patio as she strolled through her beds of roses. Caring for those small delicate flowers brought her joy and peace.

I smiled as I studied the painting. Grandmama had provided my direction in life, the one person that kept me grounded. My love of the outdoors is rooted in her appreciation for nature.

She was a remarkable woman, getting her Masters and teaching Vocational School until she retired. After retirement, she went on to run our family business and became Mayor of our small southern town.

An older woman with graying hair and a warm, inquisitive smile walked up to me. “May I help you?” she said.

Not hesitating, I turned back to the small watercolor. “I would like this; I said,” pointing to the painting. “Can you also pack it up and ship it for me? I’m traveling and have no way to take it with me?”

“Sure,” she said as she lifted the watercolor from the wall.

We discussed the painting as she wrapped and packed it, and then eventually began discussing my hike. We were well into our discussion when she told me the shop was closing. I was startled, realizing it was late in the day. I had been there for almost an hour.

The woman – I learned her name was Madeline – walked out with me, and as she locked up, she asked me if she could take me to dinner. She had no other plans and would enjoy continuing the conversation.

Dinner was great, and we talked for over two hours. Madeline was 74 and had a warm, engaging personality. She was one of those people that could draw you into a discussion with an easy intensity that made you oblivious to everything else.

I listened as Madeline described her life’s journey. She had been a nun for years before deciding to leave and raise a family, but she never regretted the choice. She was highly educated, and as I settled into my seat, we discussed everything from religion to politics and her love for her rescued pit bull mixes.

Madeline took me back to the hotel and dropped me off later that evening. Like a few other people I met on that journey, she is one I still remember.

A Trail of Decisions

The two days off in Pagosa Springs were filled with errands – shopping for supplies, mailing home equipment, and making decisions. Every time I met a new hiker, the conversation started with, “Have you hiked through the San Juan’s, or do you know anyone that has?”

Nobody had run the gauntlet except for one young hiker. He had made it through the first few days, and then like me, he had bailed out of the mountains and into Pagosa Springs. “I’m not going back up,” he said. He paused for a moment as his eyes shifted to meet mine. “It was too much,” he said softly.

Everyone was road walking to Creede, Colorado. I hated road walking, and just like Chama, I agonized for two days before finally deciding to walk alone. The road walk did not last long, though. I was about 8 miles out of town when the second vehicle slung projectile pinged me in the leg! “Shit!” I shouted as I jumped to the side. Those little rocks hurt!

Looking down at the small drop of blood on my calf, I sighed deeply before standing and sticking out my thumb. To hell with this crazy road walking. I would come back to hike the San Juan’s.

My hitchhiking was varied and interesting. Three hitches later – a plumber, an artist, and a restaurant owner- I was dropped off in Creede, Colorado.

Creede, Colorado, has now vaulted to #1 on my list of “Favorite Western Towns.” I had been transported back in time, straight into a snapshot of the “Old West.” I managed to snag a room at the “Creede Hotel” before heading out to explore, pretty excited to discover this flash from the past.

Creede would end up being the beginning of a very complicated hike. Like a tangled web, I would get caught up in multiple moves to avoid what I was told was impassable snow during a frigid year. 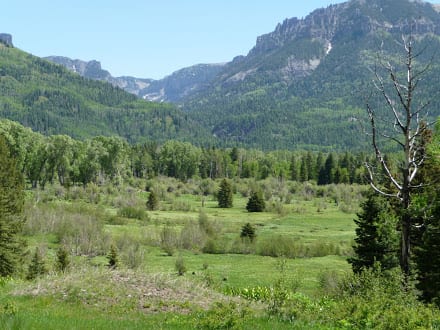 Banded Peak Ranch was the end of what ended up being a very long few days in the San Juans. Although beautiful, that section left me tired and battered.