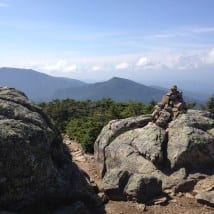 I could not find my other earplug last night.  A constant, regular snore would have been one thing,  but the startling, intermittent noises that abruptly woke me every few minutes, sounded more like loud, gurgly, bear snorts.  I was shocked awake twice, convinced an animal was approaching my tarp, and terrified when I reached for my Gerber, scrambling around before I remembered it was still packed away in my bag.

Other than the adrenaline hangover, I would slog through the next morning, the hut experience was fun, in that all of my hut mates were interesting.  I enjoyed chatting with Andrew and Ann from Virginia.  They were really nice, and enjoyed outdoor adventures as much as I did.   Altogether, there were five adults in bunks by the time I went to bed, ranging in ages from 45-65.  Once the lights were out, ages also bottomed out, and everyone digressed into fits of giggling as we discussed Hogzilla in the Smokies, other wildlife encounters, pet spiders and dog obsessions.  It was like summer camp.  There must be a bunk bed/giggling correlation no matter one’s age.

The next morning I awoke to rain, and immediately began obsessing about Webster Cliffs.  I had heard they were steep and required hand over hand maneuvering.  I knew they were probably about 50% as hard as the rumors, but this was still too hard for a one handed woman with rock paranoia.  I decided to immediately begin asking everyone if they thought the cliffs could be done one handed in the rain.  I got several maybes, even more odd looks, and flat out NO from the 8 and 9 year olds I asked….probably the only two honest opinions.

Finally, I ate breakfast, and the left overs of those around me, and headed out, still obsessing over the cliffs, and if I should take the easier cut-off trail.  The little voice in my head said “Suck it up big girl, and stick to the white blazes.”  I marched along visualizing sheer 50 foot drops where I clung from my splinted hand, screaming in agony, or tumbling to my death as my splinted wrist failed me.  As I let my imagination run wild, I stopped to chat with a young NOBO, who informed me there had been “hairy sections,” where she “clung to the cliffs while being buffeted back and forth by heavy winds.”  This recap was from someone with young strong twenty something arms and not my old late forty T-Rex stubbies.

I was going to die.  I could clearly visualize my silent plunge down the cliff faces.

I finally came to a side trail that went around the cliffs and away from my White Blazes.  I had been told this was an easier descent around the cliffs, and that I would be wise to take it.  I stopped to debate direction, again questioning poor unsuspecting hikers that passed by me, and finally caved to the pull of the blazes, and headed towards the cliffs..

I picked and skooched my way down the rocks, feeling very grateful that the “buffeting winds” had calmed before I reached the rock faces.  I observed that I would need new shorts soon.   Mine appeared not to be skooch proof, and I had heard a couple of ripping noises as I lowered myself over and down the rocks.  I could not lift my butt above the rocks with one hand, so my cheeks served as my second hand.

At one point I attempted to lower my pack to a ledge below me, leaning over as far as I could before letting it go, only to watch as it tumbled down the cliff and into the trees below me.  I used some colorful words as I slowly slid down the rocks, and then lowered myself through the trees for another 15 minutes, putting back on my pack, and then hauling myself back up through the trees to the ledges.   This little gauntlet was the highlight of the descent.

I made my way on towards Crawford Notch, chatting with no less than 20 NOBO’s along the way.  I currently add an hour to every day just to exchange logistical information…..where to stay, places to eat, upcoming terrain, places to eat, hikers seen, places to eat, etc.  The NOBO’s were also more prone to travel in packs than SOBO’s, so the conversations had a tendency to be longer, as I had to discuss with the head of the snake, and then again with the tale of the snake.

There was trail magic at Crawford Notch.  Someone had left sodas in a box.  I restrained myself and only grabbed one grape soda, chugged it so I would not have to carry the can, and took back off about 5 minutes later.  The need to keep moving was strong, and the need to not carry ANY unnecessary anything was even stronger.

The hike to Ethan Pond Campsite was nice, and relatively flat.  There was a moderate climb, but nothing too tough, before the trail leveled out into bog bridges.   I always welcomed any flat trail, as it was rare along the Appalachian Trail between the White Mountains and White Cap Mountain in Maine.

The caretaker for Ethan Pond Campsite let me set up my tent in the overflow area back up in the woods.  I think she was mostly just concerned by the large number of rocks I was assembling from around the area and placing on the tent platform, to use as anchors for my tarp.  I saw her watching me, from the corner of my eye, as I wearily lugged a very large rock towards the platform.   She coughed loudly, and I turned to her “shocked” that another person had witnessed my onerous chore.  I smiled wanly, and started to turn to locate other small boulders.  “We have some overflow sites behind the shelters” she exclaimed quickly.  “Really?” I said, turning back to her with relief on my face.  I gathered my stuff and followed her back down the trail.

She had said there were bear problems around the area, so it was nice to be away from all the people and food.  I reached the overflow area, and then headed further up into the woods.  I knew she would not check on me before morning, and the bears would all be headed for the shelter and platforms.  The section hikers in those areas probably smelled much better than me.

I set up my tarp, laid my horrid hiking clothes around the edges of tarp as a bear deterrent, and settled in to fluff up my sleeping quilt, and strategically place my Gerber serrated edge knife and nail clippers where I could quickly grab them.  I was well prepared for all nightly marauders.