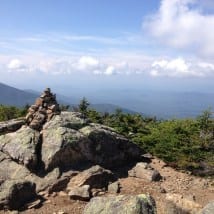 I left camp this morning and literally jogged the 4.8 miles to Zealand Falls Hut.  I felt as if I was in a park.  There were a few bog bridges and an occasional pile of rocks to climb over, just to remind me I was still in The Whites, but otherwise this was the easiest hiking I had experienced on this trail.  Tears practically welled up in my eyes as I stretched my tight bruised legs, and glided along with my head held high, admiring the views that included sights other than the tops of my shoes.

Of course this all came to an abrupt halt as I rounded the corner of the hut and began my first climb of the day. It was a steep climb with a ladder or two thrown in for good measure.  I had not stopped at the hut.  People were gathered for mornings hikes, and I felt like I was imposing, as they all peered down from the porch at me.  I just raised my hand, smiled, and kept moving.

My upper body was getting BUFF from all the climbing and scooching.  I had even spotted the shadow of a tricep muscle that morning.  I was simply going to waste away when I only had to use my legs to hike.   Maine and NH made me glad I had four limbs, but to offset the ripped physique, I was covered in bruises, and a mosquito had bitten me right on my spine in the middle of my back.  That would not have been so bad, but my pack rested right on the bite, and an ugly sore had developed, made even worse by the fact that I could not reach to scratch the spot.

The highlight of the day was the climb up steep South Twin.  It was basically one massive stair case that seemed to never end.  I dragged myself over the final rock, and walked a few steps to some of the best views of the entire trip. The skies had been cloudy all day, and had cleared shortly before arriving.  I stared across the ridges of mountains, surrounded by bright, blue skies and low, white puffs of cloud.

I climbed up on a rock near the summit sign.  The views were too spectacular to rush past, and it was time for a snack, so I sat down to unload my pack and take in the sights.  Looking out across the slabs of grey rock, I saw a head bobbing over the rocks in my direction.  I was about to meet Wayne from Maine…one of those serendipitous meetings you always remember.

Wayne was tall, lean and tan, and I later learned a retired 72 year old dentist from south of Portland. He was also a mountaineer that had done all of the trails in the Whites during both the summer and winter seasons, to train for his mountaineering adventures all over the world.

Wayne walked up and asked where I was headed.  The conversation just naturally progressed from that point.  It was an easy conversation, as we discussed travels, family, and other common interests.  Occasionally, on these journeys, I meet people that have an impact on me, and Wayne was one of those people.  Over the course of the next hour he shared his lunch with me, and I learned about him, his faith in Christ, and his love for his family and the life he said he had been blessed to have. He exuded a quiet confidence, humility and appreciation for life that is always a pleasure to encounter.

I remember he told me a story about his open heart surgery the year prior.  When the issue had been discovered he had been told the surgery needed to happen immediately. The surgeon he wanted had vacation scheduled for a week, but said he would cancel it. Wayne told him to take the week and they would have surgery when he got back. Wayne wanted him fresh and rested. I asked him if he had laid low until the doctor returned. Wayne grinned and said “No, I climbed a couple of four thousand footers.” “The surgery was very risky and I may not have gotten the chance again.” I grinned back at him and nodded in understanding.

An hour flew by, before the trail began to whisper again.  These whispers are often preceded by the tendon over my right knee tightening up and grumbling, but the “whispering trail” sounds much more mystical than “I was old and my damn muscles had begun to tighten up, so I needed to move.”

I wished Wayne well, and slowly stood to shake his hand, before turning to begin slowly picking my way down the mile long rock scramble to Galehead Hut.  Once reaching the hut, I decided to settle in and call it quits for the day.  It was a great location, but my decision was determined by the description of dinner I heard one of the hut crew providing a patron.  My appetite had reached a point of constancy.  I was constantly hungry, and the mention of “real” food overrode any self-constraint and discipline I had.

My justification to others I met that evening, and a few days later when I called home, was that I had heard the bears were very aggressive between Galehead and Garfield Huts, and some hikers had gotten their food stolen and tents ripped up.  I had to exercise on the side of caution, and stay in a solid dwelling for the evening.  Really though, it was all about the food.  Out here, Black bears were really the least of my concern, unless of course, they tried to take my food.