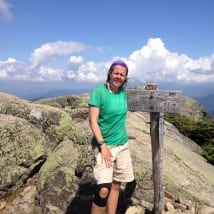 The perfect morning – a great breakfast, as are all breakfasts that don’t include Pop-tarts, and great conversation with the other hut patrons.   I packed up and headed out immediately after breakfast.  It was a beautiful day, and the Appalachian Trail was calling my name.  It was also chilly, whispering the coming of Winter, and Winter in a tent, on top of a mountain, could be brutal, so I needed to continue the “winter race.”

Once on the trail, I began meeting people almost immediately. This was the I-95 section of the White’s.  I gave up at least two hours to the race just running my mouth, and chatting briefly, and in some cases less than briefly, with most everyone I passed.  The gift of gab is a southern blessing and a southern curse.

The ascent up Garfield was tough, with a steep boulder scramble, so I strapped my poles to my pack and climbed.   I shuddered at the thought of going northbound, and having to start my morning with a climb down that obstacle field.  I usually needed about a half hour to warm up, and much preferred climbing UP.  My knees no longer handled impacts like they had when I was young.  I mostly groaned all the way down, as my knees fiercely protested, and my old mind stressed about me losing my balance and taking a tumble.  My bones were also a little more brittle.

Once over the climb, and headed down the other side, I encountered a group of Freshman from Bates, out as part of their orientation.   I passed a girl at the rear of the line, and a young man immediately beyond her.  She was encouraging him as he struggled down some very steep rocks.  If nervous with heights, I’m sure this would be a little intimidating.

The girl let me pass, commenting that nobody had told them this would require technical climbing.  Although no technical climbing was actually involved, if not having done much hiking before, this was a tough introduction for them.  This section of the Appalachian Trail was tough for even experienced hikers, with all of the rocks, roots, and elevation involved.

I came up behind the young man frozen on top of some rocks, uncertain of his next move.  He was obviously very nervous, so I sat down behind him and said “I just skooch on my butt in these situations.”  “Why don’t you just sit down.  You are almost at the bottom.”  He quietly responded, “I hope so.”  I sat behind him and quietly talked to him as he sat down.  He slowly slid down the large rocks and climbed to the bottom.  “Nice job” I said.  He slightly turned his head towards me, and grimaced.  I think he tried to smile, but he was a little embarrassed and made no eye contact, before turning and moving on fairly quickly.

I found the rest of his group about 100 feet after reaching the bottom.  I wished them all well.  They passed me about a half hour later, where I had stopped above tree line for lunch.   A bit after them, a north bounder stopped, and asked if he could do a short interview for his documentary.  It consisted of two questions.  “What is your trail name?”, and “Why do you hike?”  I hoped he had a little more “meat” for the movie, because I know I was far from riveting.  I’m sure there were other more “theatric” hikers that were more exciting.

As I was packing up after lunch, Hobbit and Hercules walked up.  We ended up flip flopping for the rest of the day, and as low dark clouds began moving in, we hurried across the Franconia Ridge, above tree line.  I had hoped to enjoy the views, but my focus shifted to the thunder that began rumbling around us.  About half way across the ridge line, I slowed down and chatted with Hobbit, while Hercules moved ahead.  We both looked up as a long, deep rumble echoed around us, and she asked if we should stop, and hide behind a boulder, or keep moving.  I told her the storm was still distant, and to keep moving.  I had learned the hard way, on past hikes, that hiding from lightning was not easy to do above tree line, or really advised.

We found Hercules waiting at the top of a rock out cropping, pretending to be a giant lightning rod, and I ducked my head at the next rumble and kept moving past him.  Glancing back, I realized they were no longer behind me.   Another rumble boomed across the ridge, and the rain started to fall.   I turned and yelled back in the direction from which we had just come.  I heard a return shout, and walked back to see what they were doing.   I was getting a little anxious, and began to jog.  Rounding a larger boulder, I found them huddled against it.  “We are hiding from the rain” they said.   Over more thunder, I shouted “You won’t melt, let’s move.”  We really did not need to be up here as the storm was now quickly approaching.

We still had some beautiful views, off to the sides, as we jogged along the ridge.  Hobbit got a great rainbow shot, but photos ended, as for the next 45 minutes we hustled across the exposed ridge, dodging showers and listening to thunder continue to rumble and grumble around us.  Once we moved below tree line, and started climbing down, they both moved on ahead of me.  I stayed fairly close to them, but their young legs and youthful lack of fear of falling kept them in the lead.

We headed on down the mountain, stopping to get water at Liberty Campsite.  We had three miles to go, straight down, and the rain had begun in earnest.  I skooched and water bugged my way on down, and we finally reached the turn off for the AT.  The last few days have included sliding on rocks, and several nasty falls.  I am sure the first thing that would come to mind, if you saw me on a large rock, would be the image of a large gangly water bug with all of it’s limbs spread to cover as much surface area as possible. The bug would inch itself forward and then suddenly sling itself onto the next rock in a spasm of less than graceful energy.

We reached a turn off for the White Castle Trail, and we all looked at each other.  Nobody wanted to say the words.   We all realized, at the same time, that we had a @#$%^$ bonus mile.   It was almost dark, pouring rain, and we had to head a mile off trail to the Flume Visitor Center to reach US 3.  We all lowered our heads and took off down a nicely graded, paved trail.  To our disgust, this ended about three tenths of a mile later, and we headed back through the woods.

Reaching the parking lot, I pulled out my town guide and we called a shuttle to come pick us up.  Standing on the side walk in the rain and lightning, I looked around for any type of shelter.  Even a “Porta Potty” would suffice.   These made excellent shelters in rain, and winter conditions.  Even the composting ones were nice, with their slight natural warmth generated by the “composting process.”  You just had to get past the smell, and the smell, which was never an issue when soaked or freezing.

The van arrived just a few minutes later, and three little wet, stinky hikers climbed on board.  I had called to also reserve a hotel room, and the hobbit family was headed to the town hostel.  We dropped them off first, and I watched from the van, as they weaved through the mass of people in the garage, grateful to have my own room and shower in town.  A shower would be nice, but I have no pride and admit that the thought of having immediate access to a restaurant, any restaurant, was probably what was most exciting.