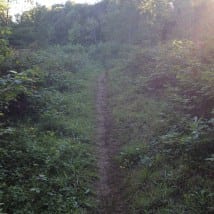 I enjoyed the town of Lincoln, NH. It was a little spread out, but everything was still within walking distance. I have favorite towns along all the trails, and Lincoln was one for one reason. Lincoln had the BEST breakfast joint of any other trail town I had visited. I had been in town for two days, and on my last morning, I was again headed down the road to “Flapjacks.”  It is one of the best breakfast restaurants I’ve eaten anywhere, and I know my breakfasts and almost every other meal type.

I arrived to spot Hobbit and Hercules and walked over to say hi. They asked me to join them, and I began ordering. I think they were a bit shocked at the amount of food I ordered and subsequently ate, but I was a shrinking girl, and the ability to eat whatever I wanted was pure bliss. But, of course, I could only do this for 3-4 more months, and damnit,  I was taking advantage of my jacked-up metabolism as long as possible.

After breakfast, I headed over to the Price Chopper. I needed one more dinner for the next section to Hanover….a pack of Ramen and a pouch of tuna….yum. I was out front packing up when a man walked over and asked if I was headed north or south. The shoving of Ramen into my pack must have tipped him off. I replied, “south,” and headed to the Flume Visitor Center. He told me he was the Ridge Runner for Franconia Ridge and said he and his wife would drop me off. He was a lucky guy. I would love to have maintained that section of trail.

They dropped me off in the parking lot at the Center, and I just stood there looking a little lost. I was not exactly sure where to find the trailhead. A park employee warily asked me if I needed anything.   I explained, and she directed me towards the mile-long bike path leading me back to where I had left the AT. As she explained and took a step back to point, I saw her foot about to come down on the largest earthworm I had ever seen. I grabbed her arm and quickly stepped around her to retrieve the poor worm, tossing him off the road and into the grass. This appeared to have solidified her perception of me, and she quickly retreated into the office. I felt terrible for startling her and tried to explain the worm, but she was having none of it and frowned at me as she shut the door. She was not a worm lover.

Several north bounders had told me that Kinsman Mountain was awful, but compared to what we had been through already in southern Maine,  the trail passed under my feet with barely a whimper from my knees or any skooching required. Once they made it through The Whites and Southern Maine, Kinsman would probably not even be a memory for Northbound hikers.

On the descent to Eliza Brook, I saw a woman moving very slowly, apparently injured. I gain on nobody going down steep descents so that this was an injury was the only explanation. I got closer, and the hiker looked up and smiled. With his long wild hair, he was a little scary looking, but I bit back my first biased impressions and began to chat with “Jimbo.”  He did not appear to want to let me go around him, and we were close to the bottom, so I just followed along for the next half hour chatting. He said he was a flip-flopper and seemed like a nice enough guy. He said something about doing side trails and ending up in the Poconos, so I was a bit confused but did not ask too many questions as he focused on his foot placement, stopping to examine each rock closely. I felt it best not to irritate him by telling him the Poconos were not part of the Appalachian Trail, not only so he could focus on his feet but also because instinct told it best not to irritate this guy.

I almost screamed as he continued to inch across the boulders on the trail. I had never hiked this slow. He would move at a snail’s pace unless I tried to pass him, then he would speed up just enough to stay ahead of me and angle over in front of me. This was a good test of my tiny bit of patience, and again my instincts urged me not to irritate him. Finally, he stopped for water, and I could move on past him.

Near a small creek, I arrived at the junction to Eliza Brook Shelter a few minutes later. I got water here, chugged a liter, and soaked my Ramen for dinner later. As I was passing the side trail to the shelter, I saw a woman coming toward me shouting, “Are you a south bounder?”  I said yes and was immediately peppered with questions about where I was going, how many miles I was hiking daily, etc. She seemed a little frantic with the rapid-fire questions.   She was a south-bound flip-flopper and asked if I had met Jimbo and what I thought about him? I told her he seemed fine. She then replied that she was at the shelter alone and said, “You couldn’t be too careful.”  She looked past me nervously and then wanted to know if I was staying at the shelter for the night.

My hiking routine was pretty constant. I would usually stop and eat about an hour before dark and then hike until dusk, where I would find a small spot to set up my Z-Packs Tarp. I usually set up far enough away from the trail where I was hidden and did not have to worry about the two-legged beasts of the woods.   I could tell by her expression she was disappointed I was not staying, and at that point, my southern guilt overrode my better judgment. I looked down the trail longingly and then said I would stay at the shelter for the night. Her face lit up with a big grin, and we headed back to the shelter. I was not too fond of these trail shelters unless necessary. They were often dirty and overrun by vermin, but this one seemed better than most.

I learned the other hiker’s name was Cozy, and she had gotten held up and lost her group. Hikers often formed hiking groups but often changed, disbanded, reformed, etc. I could tell she was not comfortable hiking alone and made it very clear that I preferred hiking along. I had to do that often on this trail, unlike the western trails where people seemed more independent. It wasn’t that I was a loner. I was mainly just stubborn and independent. I wanted to do my own thing – stop when I wanted to stop, go when I wanted to go. I had no desire to compromise and be flexible with another person’s schedule.

Over the next two hours, Hercules, Hobbit, Sandman, and Jimbo all showed up. In addition, there were also about 12 section hikers tenting on the pads past the shelter. I should have put in a few more miles and camped. This shelter had no lack of people and security for those not crazy about hiking alone.

I had set up in the shelter, and so did the others as they arrived. This was my second and probably the last shelter for a while. I stayed on one end of the shelter, so I could put my gear between me and the wall and not worry about mixing it up with anyone else’s stuff. I also tried encouraging the other females to sit beside me, but that was futile. So I was up all night, earplugs in place, listening to a cacophony of snores, moans, grunts, and other odd sleeping noises that had to have scared off any bear in a 10-mile radius, and that was from the WOMEN. The men were a whole other racket that about drove me bat shit crazy also.

Barely containing a scream, I finally sat up at 5:15 and started packing up my things. Hobbit asked me quietly if I was leaving. I said yes, and heard Cozy rustling around on the other side of her. She mumbled it was too early to get up and rolled back over. The others slowly began stirring as I finished packing, but I was the first to be up and moving. I had gotten very little sleep, so my human tolerance meter was at a low point. I quickly moved away from the shelter, looking forward to finding a nice rock for a nap.