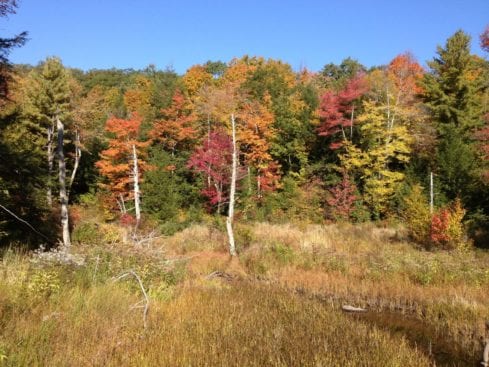 My feet traveled over the trail, but my mind did not register the steps. I had retreated inward, and my mind was turning, flipping quickly from one scenario to the next, ultimately settling on an endpoint I did not want to consider. I would retrace my thoughts back to the beginning and try again. This continued until I was mentally exhausted and could come up with no scenario that did not end at the same place.

I walked into the Highpoint State Park Headquarters and over to a small open window that opened into an office area. Vicki walked towards me, asking if she could help, and as I opened my mouth to ask a question, big tears began to roll down my face. I held up a finger and turned my back to her, hearing her say, “oh no.”

I am not very emotional, but I was going home unexpectedly, leaving a journey that brought me so much peace. I had worked hard for the past two months and had a lot of emotion and effort tied up in this trail. I stood with my back to her, head bowed, as hot tears washed down my face, and I gathered myself.

No regrets are something I try to base my decisions on, but this choice would be different. I knew I would regret leaving and not finishing, but I was committed to my obligations. I knew I was making the necessary decision based on personal circumstances at home. I was still sad I was stopping, so I let my frustrations run out through my tears.

I really can’t complain. I was allowed to spend two fantastic months in some of the most beautiful parts of our country. It had been hard and, at times, painful, but I had encountered fantastic weather, few bugs, interesting people, and insights into my limits.

I love to hike, but now it was time to take care of responsibilities, move forward, and see what came next. Hiking has been a part of my life for as long as I can remember. I’ve hiked the PCT, CDT, AT, and other long trails. Although I would not finish the Appalachian Trail this time, I knew I would eventually return.

I bounced around a lot in my youth. My one stable had always been this trail since I discovered it as a child. When I could drive and had my own car, it was where I went when things got tough. It was where I was most comfortable because it was stable, and it would be waiting when I returned.

previousOne of Everything….
nextColorado Trail