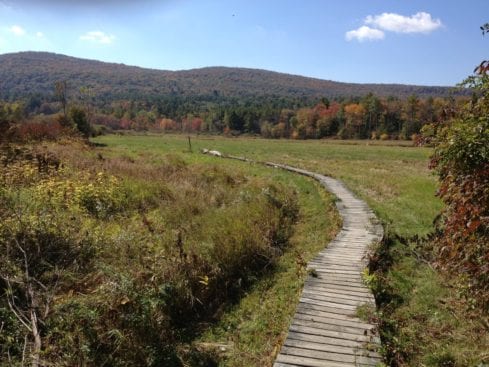 I began tossing and turning before the sky had even begun to lighten up.  My hips were sore from sleeping for over ten hours, on a two inch thick mattress.  I found very little difference between sleeping on a one inch thin foam pad or on a two inch thick inflatable mattress.  It took me about 30 minutes to pack up, shove down a bar, and set off down the trail, following the dim lit circle of my headlamp.  It was a good thing the white blazes were easily spotted, because with the thickening fall leaves on the trail, I had a hard time telling where the trail ended and the forest began on either side of the path.

I walked slowly, completely focused on the circle of light at my feet. Little rock points poked through the dry leaves, and I tentatively walked across them, hoping not to twist an ankle or slide into a gap between the rocks.  Fall hiking was beautiful, but it had it’s own challenges in the large hard wood forests.

I reached a road crossing, and paused to take out my guide.  I had seen mention of some type of country store that served breakfast.  I stood there for about 30 seconds having the typical internal battle – to go find food, or to keep hiking.  I’m not sure why I ever battled the inner beast.  Food was always going to win at the end of those pointless struggles, so I turned west and headed down the road towards Holly Hill Farm.

The store had just opened.  I ordered one of everything, and headed out to the porch to set up for the feast.  I’m sure local management was thrilled to have someone doing a free demo out front, and even paying them to demo their food.  I smiled at all the morning patrons, trying very much to not look like a vagrant, with piles of food and wrappers surrounding me.  Several people picked up their speed, looking a little nervous as they moved quickly past my table. I wrapped up breakfast and headed back down the road to where the AT crossed into a beautiful New England field.  As I waddled painfully onto the trail, I was relieved to see no climbing for a bit.  I had over indulged as usual, and needed time to digest before starting to climb mountains.

The theme of the day was “people encounters.”  A woman stopped me on a bog bridge because she “Just loved to talk to the hikers.”  Later as I headed down a quiet country road a woman stopped beside me in her SUV, and with a frown on her face asked “Are there more of you out here?”  I did not really know how to respond, so just smiled.  “I have rice and beans” she said.  “I don’t cook” I responded with a slightly confused tone.  “You don’t have to” she said.  “I cook, and have beef patties with cheese also.  Tell the others” she said as she hit the gas and took off quickly down the road.  I figured I was in an espionage worm hole, and we had just had some type of top secret code conversation.  The random non-hiking people out here do keep the experience lively at times. I cannot even imagine what hiking the American Discovery Trail would be like.

The high light of the day was a wicked (insert Boston accent here) animal encounter. I had spotted the perfect sitting rock near an old woods road, and sat down to finish off a half dozen donuts from my breakfast stop.  A little snack to tide me over until lunch.  About 20 yards away I watched as two adorable chipmunks played chase on a log.  I would leave them a small piece of donut before leaving (very small piece).   Suddenly there was a loud swooshing sound and a large hawk landed on one of the chipmunks as the other one hurled itself from the log squeaking loudly.  The bird very efficiently dispatched the poor little creature, and leaped upwards into the air with what was left of the poor rodent.

I sat frozen in shock.  The magnificent bird was beautiful, but I could not get past the death of the small mammal that had just been playing with it’s mate, sister, daughter?  I knew that would stay with me for the rest of the day, so I left half a donut on the log for it’s “friend,” and quickly packed up and moved on.  Life was brutal.

Reaching the Murry Property in New Jersey, I stopped early for the day.  It was late afternoon, but this was a stop I had enjoyed before, and had looked forward to seeing again.  I was told the owner was also a hiker, and he had built a shelter on the property that included water, a shower, and an outlet for charging my phone.  Also included, free of charge, were two very frisky and boisterous burrows.  I laid out my gear and headed over to say hi to the donkeys.  That only lasted a minute though, as they became inappropriately frisky, and I decided it was time to head back to the shelter.

I had received a couple of emails on my phone, and tossed and turned for quite a while before falling asleep.  I  had some decisions to make the next day.