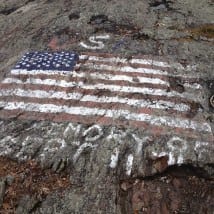 The air was still and damp on the Appalachian Trail in NY when I walked out of my room early the next morning. I wandered in the direction I thought there would be a motel office and continental breakfast.

Coming around the corner, I ran into the owner carrying a large basket with fresh breads, fruit, cereal, juice and milk. He immediately handed me the basket and announced breakfast was served.

I looked at him a little confused, and he followed up with an explanation. “We deliver breakfast to the rooms in the mornings” he said. I studied him for a moment and said “When will you be able to shuttle me back to the trail?”

Over the weeks, I had become fairly single minded – hike, and my mind had already moved on to the next task, with the current one resolved – food. Pursing his lips slightly, he paused and said it would probably be about 10AM. That was too late.

I took breakfast back to my room, ate quickly, and then grabbed my pack to go sit outside and watch the motel owner deliver breakfast (stalk him). It was a little more work to deliver, but smart. He controlled how much we ate and when. Anxiety slowly built as I watched him. Winter was coming, and I could sense it in the chill of the morning air. It was getting colder and frostier with each passing morning.

Staring at the ground, and making no eye contact as he passed me, I glanced down at my watch to see it was 8:45 AM. A few minutes later he came back around the building, and walked over to tell me he could offer me a good deal to slack pack and stay another night, keeping my pack in my room while I day hiked, and picking me up at the end of the day.

I told him no thank you, but being southern and gracious, and not wanting to hurt his feelings, I immediately felt the need to explain my response. It was probably not necessary, but graciousness was part of my genetic coding.

I had made the decision to backpack the Appalachian Trail, and for me that meant carrying my pack the distance. In addition, I enjoyed the flexibility of always having what I needed on my back. I could stop and start when I wanted, camp where I wanted, and never worry about not having exactly what I needed. There was nothing wrong with slack packing, or not carrying a full pack. It was just not my cup of tea on this hike.

I finished explaining, and he shrugged, and said “Let’s get going then.” I was back at the trail head by 9:11AM, and hiking by 9:15AM. It was a cool, grey morning and I could feel winter urging me south. Moving through the dead brown leaves at a steady clip, my mind calculated the time until my next stop, what I would eat at my next break, how much water I was carrying, and if I would come to a stream in time to dump my yucky sink water, and get some fresh stream water.

Long distance hiking was not complex, and I found that relaxing and letting my mind wander naturally usually just resulted in it clicking through what I needed to survive. People always commented on the time I would have to think and “process,” but I found that I actually thought less, and just became more connected with my surroundings. I was more “in the moment” out here.

Today was all about rocks and poison ivy. I did a lot of hand over hand climbing and lowering, focusing hard to avoid the poison ivy found along the trail and among the rocks and crevasses that I hauled myself up and over.

This section of trail in New York was like a giant rock gym with natural obstacles thrown in to work out those smaller stabilizer muscles. There were even a few ladders thrown in for a little variety. I had small flashes of southern Maine and New Hampshire as I made my way through the gauntlet.

Although far more dramatic and interesting to lament the “dangerous rocks,” and “exhausting climbing,” New York was really was not too bad. Many of the tough sections were broken up by long flat sections of tread, that were a joy to walk. I just had to drag my feet a little to make sure I did not come down on an ankle twisting “pebble” under the deep, dry, leafy blanket of Fall.

There were some great views of Greenwood Lake, as I traversed granite ridges, and one slab of granite had a large American flag painted on it. I see a lot more patriotic symbols in rural locations than I do near the cities. In NH, I had been deep in the back country when I came across a large plywood sign with “Live Free or Die” painted across it. Patriotism and freedom – I saw both represented a lot in my travels in the rural United States.

My target for the day was Wawayanda shelter. I planned to sign the shelter log and tent nearby. Not far from the shelter I saw two hikers hobbling towards me. Both looked tired and sore, and ready for their day to be over. They asked me if I had passed the shelter turnoff. I gave them a friendly smile, and told them I thought they may have actually passed it. It was supposed to be about a quarter mile behind them. They looked a little bewildered, but turned and followed me at a slow pace, as I headed for the turnoff.

I reached the turnoff and passed the shelter, headed for tent sites I knew were probably about a hundred yards behind the shelter. Once I reached the very nice tent spots I paused and glanced back to see the other two hikers heading up the trail to the shelter. Even from where I was standing I could see the big grins as their paces increased.

It was dusk when I arrived, and darkness settled in quickly as I climbed into my little shelter. In the distance I could hear whistling and laughter as the other guys also settled in for the evening. Sometimes the best part of hiking finishing – the camaraderie of other hikers, eating a much anticipated meal, or just laying back and doing nothing.

previousTrail & Zombies
nextOne of Everything….