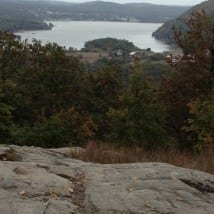 I’ve always taken hanging out with family and friends for granted, but after weeks of hiking, dehydrated food, and quick little motel stays on the trail, it was a treat to see everyone for the night, gorge on “real” food, and laugh hard as I caught up on events in the “real world.” It was also a joy to take a long hot shower, and roll around on the floor with an ecstatic little dog.

The next day, I was dropped off after lunch where I had left Rt. 17 the day before. The day was bright and dry, as all days had been for the past month. I started the hike climbing “Agony Grind,” a rocky little climb up from the road. It really is all about perspective though, and after Maine and New Hampshire, it was a small bump.

The 8 miles over to Lakes Road was a workout, with lot’s of scrambles through a continuous roller coaster. Weaving in and out of rock outcroppings and slabs of rough rock, I was having fun after a restful night with good food. I enjoyed the exertion lowered my head to focus on foot placement as my trail legs powered me up and down rocky hills. After two months on the trail I was strong, and loved the feel of endorphins coursing through me!

The only frustration in the eight mile section was poor blazing. The Appalachian Trail spoiled me. My last long trail had been the CDT, where one of the joys of the hike was the constant hunt for the trail, use of map and compass, and constantly getting “unlost.” Out here I become aggravated when my road map had a hiccup.

I went the wrong way at least twice, and had to back track to find the trail. How dare they not have a blaze every 50 feet!

On a positive note, this eight mile section also had great trail magic. There was a cooler with just about EVERYTHING you could want and need, including AAA batteries. This was only my second instance of trail magic on the hike, with the first being in Maine. I had forgotten to purchase more batteries for my headlamp, so this was a timely find!

Originally, I had planned on going into Greenwood Lake, NY and had made reservations at a motel in town. With the night off with friends though, I was able to resupply and wanted to bypass the town. Unfortunately, they had a seven day cancellation policy, so I was going in for the evening rather than pay for nothing. At least that is my excuse for another town stop on the same day I left a town stop, and I’m sticking to it!

I passed numerous section hikers out for the holiday weekend. This was definitely a popular section of trail this close to the city. There was no chance of getting lonely on this section of trail, and I don’t think I had yet to hike a day in New York without seeing people at some point.

Once at the road, the motel owner picked me up. The highlight of the evening was getting to watch the season premiere of “The Walking Dead.” My toe/foot could have played an extra role a few weeks ago. This may have also been one of the pulls to town for the evening, but I’m not going to admit that watching a zombie show on network television trumped sleeping in a tent curled up in my Down cocoon.