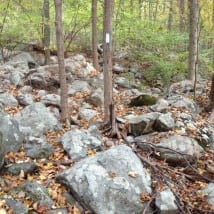 My eyes darted back and forth between the trail just in front of my feet, and the path about five feet ahead.  I was seeking some clear dirt among the continuous rocks, while also trying to not go flailing face first into the dirt and gravel.  I was nearing Pennsylvania, and the notorious rocks of Rocksylvania.

The mornings are getting a little crispy and cool now.  I wear a very light fleece for the first hour of hiking, but quickly end up switching to a t-shirt and shorts as I climb along the rocky ridges.  Fall has definitely arrived, and I expect I’m only a couple of weeks away from winter.

Beautiful weather, and a holiday weekend, resulted in me passing what felt like 200 people on the trail.   The first few people I passed, I paused to smile and say hello, but this quickly got tiresome, and I down graded to a hand wave, then a brief smile, and finally only glances up to make sure I did not knock anyone into the rocks as I passed.   It may have been my busiest day on the trail yet.

I saw at least three groups of scouts, along with numerous section hikers, all headed for two shelters. The shelters were going to be packed….with pre-teens!  It was going to be the perfect shelter storm!

I arrived at the first stone shelter to find the first group of really nice scouts.  Their leader made the boys take my water bottles with them, since they were going to get water, and he gave me a handful of Worther’s Candies just before I left the shelter to head on up the trail.  Crowds of people were not always a  bad thing.

Just before arriving at Palisades Parkway, a rock reached up and slapped me in the forehead. That is really all I can say since I have no recollection of tripping over anything on the relatively flat surface. One minute hiking, the next lying flat on my face with an abrasion, and quickly rising knot on my forehead.  Yet another war wound associated with my cat like reflexes.

I reached the Parkway and just gaped at the cars blurring past at 5,000 miles per hour. I felt like I was in a video game.  I’ve slowed to a much slower speed over the last two months, so this was a little startling.  Watching the vehicles race past at body shattering speeds was a little unnerving.  I ran screaming like a little girl across both sides of the four lane parkway.  It was a holiday weekend, AND mid-Saturday morning, so it was busy!  You also don’t mess with NY drivers.

I was being picked up at Rt. 17 for dinner with friends late in the afternoon, so I was cruising along with my head down when I came to the “Lemon Squeezer.”  There was a big jump down prior to the squeeze, and I slid to a halt, staring down at the drop off.  At least ME and NH had ladders or stairs.  NY must be trying to show it was just as tough as it’s northern cousins.  I slung off my pack, jumped down, and then grumbled and mumbled my way through the squeeze.  Good thing I had dumped about 25 pounds so far on this hike.

I began chatting with a man walking his two Scotties, and we had a good conversation as we headed for the Rt. 17 parking area. Once there, he offered to give me a ride to a location in Harriman where my friends could more easily pick me up.  I was unknowingly dropped off at a major intersection, and the dirtiest convenience store I have ever seen.  I grabbed a soda and sat on the sidewalk in front of the station, at the very end of the walkway.   I felt as if I was in a little microcosm of New York City.  Several people tried to give me money, but most took it back as I politely declined the cash, while a couple practically through it at me.  I hoped it was the pack, and not that I looked that filthy.

Finally, I was whisked away to dinner with family and friends for the evening. With no time to clean up, I was made to wear booties and sit on towels.  I still felt all the love in the room though.

It was good to be surrounded by laughter and warmth, and although I was happy to be home, I could still hear the whisper of winter. My eyes drifted to the dark windows. I gazed out into the night, feeling the restlessness begin to stir. It was time to hike.