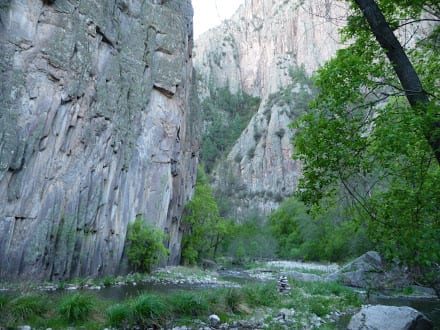 I had a good time camping with the guys last night, and was up early the next morning for more Gila River hiking!  The others were just starting to move around in their shelters.  Gabriel was the only one not in his tarp/tent.  He had actually used a net shelter that I really liked.  I believe it was the MLD Bug Bivy.   He also carried a tiny little tarp, but I had not seen it since there was very little rain.

“Safe hiking,” I said as I passed by him.  He smiled and nodded.

I ran into a couple hiking, about two hours into the morning.  They were chemistry teachers from CA, and had decided to hike a section of the Gila on their break.  California has some of the most beautiful hiking in this country.  It was interesting that they had picked the Gila for their section hike.  It was definitely not a heavily hiked piece of trail, and would probably not have been on my list of places to hike.  My list may now have changed though.  Gila hiking was remote and beautiful.  There was rarely any type of traffic, planes, people, etc.  I could imagine it being 10,000 years earlier and this route offering the exact same views and experiences.

As I paused to chat with the teachers, they told me that California was going through some budget cuts.  They were thinking about taking some time off, and thru-hiking the PCT next year.  Needless to say, that led to about 100 questions.  I had hiked the PCT the year prior, and was happy to discuss what I considered one of the most beautiful trails in this country.  A quick chat turned into 45 minutes, and the next thing I knew Gabe was flying around the bend, camera in hand.

Gabe was my Que to keep moving.  I said goodbye to the CA couple, wished them luck, and fell in behind Gabe.  He was fast, but I suspect he slowed down for me.  Gabe was made for speed with his 28 years of youth, and his 10 pound pack.  His pack was tiny!  It was about half the size of my pack.  I had seen the little net he slept in at night.  I believe he also carried a quilt.  Based on the size of his pack, he could not be carrying much else but food and water.  Tiny!

As we sped down the trail chatting, Gabe would often pause to take pictures.  I suspect he might have been politely allowing the old woman to catch up.  He did not carry hiking poles, and I don’t think I ever saw the camera leave his hand.  I remember seeing him late in the hike, when I was coming south from the Canadian border.  The first thing I saw, as he came over a rise, was his camera.  I knew by the way the camera was positioned in his hand that it was Gabriel.

Out of Order on the Gila

We stopped for lunch along the river, and then continued on until we met “Out of Order” around 3PM.  OOO was another young hiker I had met in Lordsburg, NM.  He was also one of the long distance hikers I’ve remembered over the years.  OOO dropped out of Law School to hike the PCT, and never stopped hiking.  He has done all of the major trails in this country, along with paddling 7,000 miles on the Mississippi.  The last I knew, he was headed south through Europe.

Long distance hiking is compelling.  Once hooked, it is hard to stop.  Most of the “career” hikers I have met are smart.  They have figured out how to fund their journeys, so the journeys themselves are not impeded by the means to provide.  This means that the life they choose to live is often “non-conforming.”  I was once referred to as “non-conforming.”  I’m not even close, but can always dream.

The introduction of Gabe to OOO ended my hike with Gabe.  They were both about the same age and hiked at the same speed.  I watched as they sped off down the trail.  I would occasionally catch glimpses of them in the distance.  Even from a distance I could see the speed at which they moved.  I would see them again, but not on this day.

Dinner time was around 5PM, and I stopped for about 45 minutes to eat my meal.   Early evening was my favorite time to hike.  I loved the slow, easy rhythm of everything around me as evening approached.  Sunset light shows were also a highlight at the end of the day.  As far as camping for the night, eating where I slept was mostly avoided.  It still happened sometimes if I was with a group of people, but not often when I was alone.

I wanted to get closer to Snow Lake before I stopped for the night, so I continued on for about 3 more hours.   The winding river, and high red cliffs, transitioned into gentle, grass covered hills as I drew closer to Snow Lake.  This was going to be my last night on the Gila.  I looked forward to hiking with dry feet again.  Water was also going to become tough after Snow Lake, so I would enjoy the Gila for one last night.

Camp for the Night on the Gila

Snow Lake was still about 2 miles north when I decided to stop hiking around 8PM.  I had hiked about 20 miles, and my legs were tired from constant wading.  I would arrive at the lake early in the morning.  There was supposed to be a campground, although my guide said there were no facilities.  I did at least hope for some type of bathrooms.  Simple things like pit toilets had become very exciting.  Trashcans were also a big bonus, allowing me to throw out extra trash.  If I was really lucky, there might even be a picnic table, and dare I hope – a water spigot!