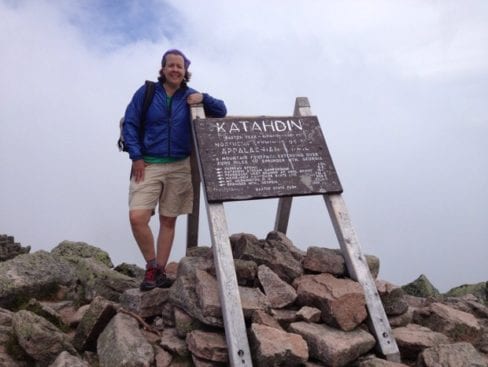 I told myself the mountain had become harder, but as I hauled myself over the rough, granite boulders, I exhaled heavily, accepting the fact that I was just older.  My mind was still 25, and my body desperately wanted to agree, but the trembling muscles, under the recent scrapes and abrasions, reinforced the rapid passing of time since I had last attempted this arduous climb.

I paused on a rock, frowning as an eight year old raced past me on young, goat-like legs, and thought back to the morning.  I was one day into a five month hike, and already missed the comfort of a soft warm room and a hot breakfast.

Morning had started at 5:45AM.  I had strolled down Main Street of Millinocket, ME, in search of the Appalachian Trail Cafe.  As I located the small diner and peered through a locked, glass door, an older woman turned the bolt and let me in to a brightly lit diner, already holding a few regulars.

The conversations in these diners were always entertaining, and I listened as I stuffed down my “last meal.”  I smiled as I heard stories of lawyers being mauled by bears, and albino moose sightings, always enjoying the pronunciation of syllables without R’s.  It was not that dissimilar from Virginia or Charleston.  Mainers just dropped them a little more abruptly.

I paid my check, and headed down to catch my Shuttle to Katahdin with Nokie.  We waited out on the sidewalk peering down the road for the other guy going southbound, that was supposed to meet us. I finally saw Matthew striding toward us.  He was about twenty, and a good looking guy with a small blonde ponytail. Everything he wore and carried was shiny and new, and he was obviously in good shape, but he said this was his first time doing any real backpacking.  He was about to discover some previously unused muscles I suspected.

We chatted a little, and I felt immediately comfortable with him.  I told him that he could stay at my reserved campsite since it was right at the base of Katahdin, and had room for about four tents.  He would not have to walk two and a half miles to his site, which would would be a bummer after the 10 mile hike up and down the mountain.  He smiled and thanked me as we climbed into the car.

The day was beautiful for a climb, and we started up quickly.  The first couple of miles were fairly easy, and then we rose above tree line and hit the first rock wall with rebar. This was fairly uneventful until we came to a rock wall with a piece of broken rebar protruding from the rock face, at about shoulder height, or a little higher.  Here we encountered Bill.

Bill was a young guy carrying a fully loaded pack.  Even thru-hikers typically hiked with day packs due to the amount of hand over hand climbing involved.  I watched as he pulled himself up using the rebar.  Suddenly, he appeared to loose his balance, due to the pack weight, and he fell to the rock below, where he said the rebar had “gone up him.” He appeared to have hit the jagged piece of metal as he was falling.

I was not sure what to do, but rushed over to help him remove his pack, sit up, and then helped patch up his hand with Neosporin and band aids. He was a very matter of fact fella, and as soon as we finished bandaging his hand, he promptly asked me if he was bleeding from the rear. I paused, feeling a little awkward, and as he twisted around to present his rear end, I briefly glanced down and said everything appeared to be in order.  I was really just thankful he did not drop his shorts.

We hiked with him a while, as he appeared a little shaky, but moved on ahead as he stopped to examine himself.   We did see him on the table lands later as we headed back down.  He seemed to be in pretty good spirits, and thanked us for helping him earlier.

The rest of the climb up to the table lands was a lot of hand over hand, and there were a couple of little scrambles that made me resort to my water bug posture, with 3-4 points of contact, but overall it went well.  Coming down was a different story, requireing a fair bit of butt skooching and lowering myself down from one rock to another.  At one point I asked Matt if he was sure we had come up this way. The rocks looked much steeper. I couldn’t imagine doing that climb in inclement weather.

The summit was kind of like tourist season in DC.  There had to have been a hundred people of all nationalities.  Many had come up the easier Saddle trail, and some up the shorter Abol trail. We even saw a north bound thru-hiker with his service dog on the table lands. She was a beautiful, very lean, German Shepherd in a harness.  He showed us how he would lift her up the rocks.  She went limp and hung very still until he set her back on her feet. She also stayed very close to him, clearly trusting the pack alpha.

To shorten what is becoming a long entry, we made it back down and set up camp quickly.  It was great hiking and chatting with Mathew. The time definitely went by much more quickly.  We set up camp, and I made a couple of wraps while watching Matt pull out a bag of seeds and nuts.  This bag was his sustenance for the next 5-10 days.  I don’t recall, but may have shared some food.  I do know that he headed back in to town the next day to get more food.  I had suggested his appetite might increase, but did not impose my opinion.  I’ve always found the trail a valuable learning experience for many type A personalities that really don’t want my opinions, and I always try to respect their perspectives.

After Dark I was awakened by a light on my translucent tarp, and a slightly frantic “Who is in the tent.”  It was Bob and Julie (father and daughter)  that I had met at the Lodge I had stayed at last night.  I had passed them coming down the mountain and knew they might be late.  They had summited, but come down in the dark and were exhausted and a little disoriented.  I grinned as Bob said
“Oh, is that a cuben fiber tarp?” through his haze of exhaustion.  Julie immediately informed her father that there was no chatting, and I grinned and pointed them in the direction of the parking lot. I can relate to the fascination with gear. Unfortunately, I share the addiction.

I crawled back into the tarp, moving gingerly as I  nursed the lumps and raspberries given to me by Katahdin.  I settled back in for the night on my Neoair pad.  It had been a good, tough day.  My legs ached as reawakened muscles struggled to repair themselves from the day’s activity.  I popped a few Vitamin I and settled down, smiling in relief.

My trip had begun.  I was going to sleep soundly – even better yet b/c it was a sleep of release.  I believe everyone has a place in the world, a place where they feel completely comfortable and at ease.  The forests, mountains, plains, and deserts have always been that place for me.  I have always embraced the wilder world.  These sometimes brutal, often beautiful lands are where my senses are reawakened to scents, sights and encounters that most people don’t experience anymore.  The long distance trails have made me the person I am today, and developed a confidence I would not have found elsewhere.

In the end, love will always take me home and ground me for a time, but peace and purpose will inevitably draw me back.