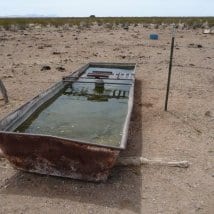 His eyes widened, and he took a step back.  I glanced around quickly.  Did he have company?  Was he alone?  Damn  – Jason had warned me about the “Hachita Drug Runners,” so I had been moving cautiously through the old ruins, and still not seen him.

The young man stood staring at me.  In his khakis, white shirt, and day pack, he looked like any other hiker out for the day.  A slow, half smile spread across his face as I watched the tension drain from his body.  His eyes continued to dart around quickly, but had slowed once he realized I was alone.

“I did not meant to scare you.” he said.  His accent was thick, and a little broken, but I easily understood him.  His smile was also disarming, and I found myself relaxing as I looked around for a place to sit, or at least lean.  My feet stayed numb as I hiked, but the minute I slowed or stopped, they began to scream as my weight settled onto the raw and blistered skin.

There was a low crumbling wall to my right, and I moved over to it as he watched.  I moved normally, not wanting him to see any pain or weakness in my movements.  I was in a strange place being watched by a strange man.  Although less tense than 30 seconds ago, my wariness remained the same.

A crumbling, mud wall stood behind the young man, and I froze as  three other young Hispanic men stepped slowly around the wall.  They were all in similar dress to the man facing me – some in khakis and some in jeans.  All were carrying day packs, and a couple had knives slid onto leather belts around their wastes.

“Hi” I said in a moderate tone as I finished sliding my pack up against the wall, and very slowly began unzipping the top pocket as I slowly sat down.  The others nodded at me as they began to settle on the wall and rocks around me, but none of them spoke.

I had always been taught never to run – never to be the prey that triggered predatory instincts.  Adrenaline was now coursing through me triggering flight, but my mind told me to stay calm.  I was no threat, and wanted this to be obvious.

All of the obvious questions hung unanswered as everyone settled to the ground, and the silence was thick with tension.  Were they alone? Was I alone?  Why were we all here?  No questions were asked.

“Water?” said one of the men near me.  He was really a kid – not over eighteen at the most, and I studied him a little more closely as he held out a water bottle.  He looked tired, disheveled.  I did not need the water, but accepted the gesture.  I knew I needed to accept the offer.

The others watched, and then looked away – beginning to quietly talk amongst themselves in Spanish.  They were not really paying me much attention anymore.

Everyone glanced at me as I pulled a snickers from my pack.  It was still too soon to leave.  Taking the whole bag, I handed it to the man closest to me, and watched as my snacks for the next two days were eagerly devoured.

Suddenly, they all rose quickly and quietly.  It was startling how they all knew to stand, without a word spoken.  Some still held their snacks.  The young man I had first spoken to handed me another bottle of water, smiled, and they silently headed off through the brush, down a shallow wash.

I felt like I had been part of an unreal moment, like it had not really happened. Their impact had been so fleeting, and so foreign.  I had no reserve of experiences to ground the encounter.  It had occurred as quickly as it had happened.

I moved on after a few minutes, and made it to a dirt road – an old forest service road – about a half hour later.  I checked my map, and headed north.  The encounter was already starting to fade.

I heard tires and turned to see a Border Patrol truck come around the curve of the washed out road.  I was suprised to see it, and as he slowed beside me, and rolled down his window, I smiled and waved.  He asked the typical “Why are you here?” questions, and then shook his head at the explanation and handed me a purple Gatorade.
Starting to pull away, he suddenly crunched to a stop.

“Hey, have you seen a group of Mexicans?”

“Huh?” I said.  I was caught off guard by the question.

“Um, no.” I said automatically.

“Well avoid them if you do.  They are mostly drug runners, and would kill you as soon as look at you.  We have been chasing a small group from the border for a couple of days.”

“I will keep a look out.” I said, as he nodded and drove away.

I’m not really sure why I said “no.”  It was automatic.  In that fleeting interaction where we had shared food and water, a travelers bond had been forged.  I wanted their intents to have been good – not to think I had been in a bad situation.

Small encounters like this would continue to mold the way I hiked.  I tried never to camp near roads or near where people frequented, unless I was with a group.  There were exceptions, but most often, even with a group, you would find me hidden away, out in the brush, where I could watch and not be seen.

2 thoughts on “Their Journey”