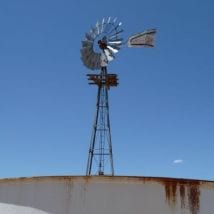 My feet felt as if they were wrapped in sand paper, as I hobbled around packing up my gear.  I had woken up early and spent 45 minutes popping blisters with the tip of my Gerber, spreading red hot Neosporin on the wounds, and then bandaging each blistered toe.  The culmination of the surgery was strips of duct tape layered over the whole bandaged mess.  Unfortunately, this also made my feet about two sizes larger.

A note on duct tape.  It is my single most important piece of gear.  I even think the sticky adhesive has medicinal properties.  It can patch tents, bags, clothes, skin, be twisted into ropes, make sandals.  I have even chewed on a piece or two in absence of jerky – not so good.  You name it, duct tape can probably accomplish it.

Slinging my pack up onto my back, I headed north, cursing and muttering around sharp spikes of pain in my feet.  A few minutes later, my feet numbed up, and as long as I did not shift suddenly, I was good for about 2.5 MPH.  Glancing back over my shoulder, I saw that the rest of the pack had spread out over about a half mile- small, white, hat covered heads bobbing and weaving through the scrubby brush.  I did not look back again for several hours, but knew I had lost them within an hour.  I had passed several stands of juniper type bushes, and knew these would serve as shade stops.

There really was no trail.  I had long since given up on my maps, and broken out my GPS. I knew to keep it hidden.  I had no desire to provide daily GPS lessons, and would let Mr. K maintain the “Expert GPSer” title.  Instead of clear tread, there were tall metal posts with large CDT signs affixed to them, about every 150 yards or so.  Most were placed at the tops of ridges, jutting up like lone sentinels.  It broke up the day, having to search for the signs on the horizon – not just plodding along with my head down, making sure my feet were planted evenly to minimize friction.

Around noon, I realized that water was going to become an issue.  My maps indicated nothing for another 15 miles, and the tanks we had passed were simply not suitable for humans – old tires, with pools of rancid water covered by slimy, sheens of sludge – what I knew was cow drool.

I’d been on some old washed out tread for about a half hour, and stopped to look out at a windmill.   It was far off in the distance, and most we had come to were dry – to go or not to go.  Sitting on a the side off the road embankment, I gnawed on some jerky while I studied the tiny, spindly thing.  From this distance, it appeared that greenish shrub lay scattered around the windmill, and as I peered closer there appeared to be what looked like power lines leading down to the rickety structure.

About a half hour later, as I still pondered the off route trek, Mr. K came around the corner and immediately announced he needed water.  I pointed to the windmill, mouth now full of peanut butter.

“That is too far away.” he said as he squinted towards the windmill, throwing down his pack as he stared out from under his hand.

“We can walk there in 15 minutes or less.” I said between mouthfuls of food.

“God!” he said with disgust as he looked down at my feet.  I had stripped off the bandaging to let my feet air out, and the raw chunks of meat, with their crinkled white skin from shoe sweat, sat propped on my hat. “How do you walk on those things.?” said Mr. K, as he slowly moved away.  I just grinned and wiggled my shriveled up toes.

Breaking out my Gerber, I began surgery once again.  I was a little concerned, as I was going through bandages at an alarming rate, but if supplies ran out, I had duct tape and my useless air pad to swath my feet.  Out here, everything could be used.

I rose slowly, settling into my bandages, and with a sigh, headed towards the windmill.  The others  walked up as I was leaving, and I heard them arguing with Mr. K about heading so far off trail to the windmill.  I knew they would follow.  The hike was still new and unknown.  The pack would not separate yet.

Next to the windmill was a disgusting cow pond, a small crater of liquid that was slightly less dense than chocolate pudding.  I glanced in the tank by the windmill – empty – and then headed around the pond towards a small shriveled tree, to drop my pack in the shade.  All of my food was melting into primordial glops, so I tried to find shade where possible.

I heard cries of dismay as I headed back towards the windmill.  The water zombies had not only discovered the dry tank, but were disgusted they had  walked a quarter of a mile to find nothing.  I did not disagree with the sentiment, and stopped to look up at the power lines.  They led to a small box up on the windmill, with PVC pipe running from the box to the ground and tank.  I walked over and climbed up, flipping open the box.  There was an  On/Off switch, but no battery.  I had read about this from other hikers, and taken the battery from my headlamp.  I slid it into place and flipped the switch to On.  I heard the swoosh of water pulled from the reservoir below, and looked down to see water gushing into the tank.

All of the water zombies cheered, and I grinned.  I would keep my limbs for the day.

I cracked an eye from under my hat, hearing steps approaching.  Moaning inwardly, I parted my lips, and feigned sleep – head laid back, on the cusp of drooling.

“I need some shade.” said Amy, sliding in beside me – GPS in hand.  I counted at least ten other trees, available.  Well, maybe not the two with dried up cow carcasses under them.  I came across these desert deaths often, and always felt badly for these poor creatures.  What a sad, lonely place to die.

Startling Amy, I leapt to my feet, grabbed my packed but open backpack, and took off.  I’m awful I thought as I headed away, smiling back at her as I announced I would see her later on down the trail.  I just had no patience, and between the water and my stinging feet, I was easily irritated.  I was definitely an “I” on the Meyers-Brigg scale, and even in the middle of nowhere, with hardly any people, I feel the energy sucked from me at chance encounters.  I must be like “-II.”

Old Hachita was where I was headed.  The others had decided to stick to the road.  I wanted to see the old ruins.  Jason had warned of drug runners, so I approached the old ruins cautiously – a stealthy hobble.  I peered into some old adobe ruins.

“Shit!” I yelped, as I rushed forward – hobbled forward quickly – and turned to see a young Hispanic man studying me.  I was about to have one of my more interesting “people encounters.”