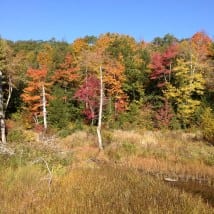 Today’s hiking was some of my favorite terrain.  I traveled through rolling forests and farming land, traveling along the edges of both used and unused fields.  This type of hiking always makes me feel as if time has stood still in New England.  The big, rolled bales of hay dotting the hills and lining the edges of dark green hay fields, that disappear into dark, hard wood forests spotted with splashes of fall color.  Overhead a robin egg blue sky, with puffs of lackey cotton driving shadows across the grass.  Connecticut and Mass. are really two of my favorite states.

It was mid-week, so there were few people out and about, but I did meet a couple of section hikers doing the Cobble Loop Trail outside Tyringham, MA.  We chatted for a few minutes, exchanging trail logistics, and then I moved on towards a rock outcropping where I climbed to the top for a snack while looking out over the fall hills.

I continued on about 20 minutes later, and about an hour into the hike I realized that I needed some water.  It was a warm, fall day.   As I started over a small hill, I heard quiet bubbling as I approached the rise.   I had passed several other streams, but they were all running away from fields that were full of cows.  I had been waiting for a spring back up in the woods, on the hills.

As I approached the stream, I noticed another hiker sitting next to the water.  I knew he was a talker from the tone of his hello, and the eagerness on his face.  I began getting water as he began talking rapidly.  He was very friendly, and clearly eager for human interaction.

In the 10 minutes I was there, I learned my gear had opportunities, I was missing out on the Appalachian Trail experience by not staying at shelters, there was no other trail worth hiking but the Appalachian Trail, and he had spent an hour in a field earlier, studying and talking to the cows.  I was really not sure how to respond to all of the rapid fire comments and questions, so just nodded, smiled and occasionally interjected with a yes or no.   We were approaching the end of hiking season.  Us poor little random south bounders were all that were left on the trail.

I continued to get water, and I’m sure was very poor conversation, and eventually he headed off, telling me to catch up and hike with him so we could chat.   It was not that I did not want to have a conversation, but after days of relative silence, the machine gun staccato of his incessant questions was just a little shocking.   I left about ten minutes later, and fortune shined down upon me as I passed him on a steep uphill section where he had to focus on his breathing.   I smiled and said hi, as I passed him bent over breathing rapidly on the side of the trail.  I told him to hike safe and I would see him down the trail.  I thought I actually may have run in to him again since I am taking two zero days once I reached Salisbury, CT (sigh), but I never saw him again.

I ended the day near Benedict Pond, up an old unused side trail.  It was a beautiful day of hiking, but for the first time in a while my feet were noticeably sore, and I was ready to stop for the day.  I think I was hitting more rocks, awkwardly under the leaves.  Fall hiking was beautiful, but as the leaves got deeper and deeper, it became more and more difficult to avoid foot placement hazards.  Honestly, for me, in my late forties and getting older now, something is usually sore….feet, knees, legs.  On a positive note though, my body has mercy.  There is rarely a time everything hurts all at once.  Each day is a roll of the dice as to which part gets the daily honors.

As I settled in for the evening, I could hear something large walking around outside the tent.  I was a day creature for the most part.  I left the nights to the other large wanderers.  I rolled over and shut my eyes for the night, knowing that if I slept my imagination would shut down.  I have an active imagination, so try to give little thought to what lurks in the nights.  If I let my imagination take over, I doubt I would hike alone in the woods.