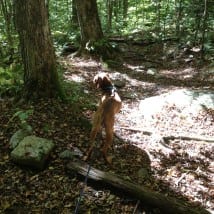 I awoke with a start the next morning.  My legs were twitching in expectation, and my soles were throbbing their own anticipatory rhythm.   It was time to move, and my body was aching and twinging in anticipation.  Muscles were bunched, and nerve endings firing as they readied themselves for another day, pounding through gorgeous fall foliage.  I encouraged all body parts to go back to sleep, but my knees decided to chime in with a few backup aches, so I groaned and sat up.  I needed to get errands done before heading out, so I may as well get started.   I watched CNN, reminding me of many of the reasons I hiked, and inhaled some early morning frozen milk products, aka ice cream.

The Shamrock Motel owner was kind enough to come in a little early so I could wash my clothes, and while they were washing I began the half mile walk to Dalton’s for the most important meal of the day, breakfast.

The waitress slapped down all of my plates, put her hands on her hips, and said “Well there ya go.”  Stacked in front of me was a steak with a side of corned beef hash, a few eggs, and a small side dish of pancakes.  All this was washed down with hash browns, orange juice, and numerous cups of coffee.   As I have said before, the ability to eat what I want, and not worry about weight, has always been one of the appeals of hiking for me.  It was also beginning to get cold, and I was loosing insulation fast.  I typically hiked almost 12 hours a day, now using my headlight in the early mornings and late evenings.  I was burning far more calories than I could carry, so loading up in town was important.

Following breakfast, I slid up the sidewalk in my little pool of breakfast grease and stopped at the PO for a box.   I had sent some food to Dalton since there was no “walking distance” grocery store.   I define walking distance as anything under a mile, which is kind of funny since I often hike 20-30 miles a day on the trail.  Those trail miles counted though.  The ones in town did not, and those that hike long distances totally get that.  In hind sight, I should have just hitched to the Wal-Mart a mile and a half away.  My box was a little sparse, and I ended up having to grab pop-tarts and sugary pastry thingies at the gas station to supplement.  A lot of empty calories that provided very little hiking energy.

I packed up and headed out late morning.   Jamba Juice called my name as I passed, but I lowered my head and marched on down the sidewalk.  If I stopped to eat again, I knew it would be another two hours before I made it back to the trail.

The hiking was fairly gentle, hitting some hills about three miles in to the hike.  The foliage was not as bright at these lower elevations, but it was still gorgeous. The leaves were getting deeper and I found myself slowing down to keep an eye out for roots and rocks.  Most exciting were the leaves layered over large slabs of granite.  If slightly damp, I was history.  My feet occasionally shot out from under me, and I had now replaced my summer bruises with a few well placed fall bruises.  I did not fall often, but when I did they were doozies, as my new muscular body fought hard to retain it’s balance.

A couple of hours into the hike, a large vicious 18 week old yellow lab puppy came flying around the corner.  He took one look at the oddly shaped and stinky human, lifted all his puppy hair, and came bounding towards me with one of the deepest barks I have ever heard.  He was invincible and scared of nothing!  I told Moby he was very handsome and he melted…..such a Labrador.  I chatted with his mom for about 15 minutes and moved on.

I crossed the road that led into the town of Becket, and several yards down the trail I spotted what looked like some kind of child’s pop up tent to the right of the trail, in a dark kind of marshy area, back in some spruce trees.  I forgot to mention that I had also passed a small coil of cotton rope lying on the trail a moment before.  This seemed a little odd to me.  Glancing over towards the small child’s tent, I saw a man in jeans and a flannel shirt crawl out and start going through grocery bags.   My guess was that he was homeless and not a hiker.   I ran into these wanderers along the trails on occasion, and usually avoided them if possible.  In this case, my internal alarm sounded and I put my head down, wanting to make no eye contact, and walked faster.  I try not to judge, but I’m also careful when alone.

About a quarter mile later I passed two other old blue tarps strung up between some trees.  There were bundles and trash underneath the tarps, but there appeared to be no people under them.  It was now sliding towards dusk, and the woods were beginning to feel a little creepy, so I picked up my pace. It was time to put some miles between myself and this section of forest.

I stopped at October Mountain Shelter to sign the log, while the devils from hell fed upon me.  I thought mosquitoes were gone in October?  I suspect that Massquitoe may have mutants year round.  The shelter was empty and the woods around it were very still and quiet.  I signed the shelter log and moved on quickly.  I wanted to find a place to camp for the night, that was nowhere near that area of the forest.

I eventually made my way to Finnerty Lake.  Brush and undergrowth flanked the little lake, and it was almost dark, so I could not see easy camping spots.  Considering all I had passed, I really wanted something a little more private anyway.  I saw a break in the brush heading up the hill away from the trail, and pushed it aside to see what looked like a little used side trail.  Nobody would see it at night.   I made my way up the hill until I found a clear spot under some spruce trees, away from the trail, overlooking the pond. It was a nice location, hopefully far enough from the pond to get no moisture, and far another from the Appalachian trail to avoid crazy humans.