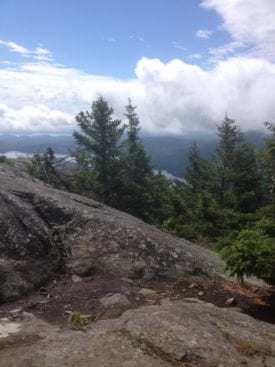 Climbing straight up a mountain first thing in the morning is so unfair!  I started my climb up Barren Mountain immediately after hooking a right out of my side trail from the hunting camp.  Both fourth Barren, and whatever number Barren that followed, were knee crunchers.   I picked my way straight up through slick, wet roots and over sharp, pointy, wet rocks, to reach the top and  then picked my way straight back down.  The trick is to avoid the rocks and roots, but that would require flying, and I only do that when hiking near ledges.  It only takes one misstep on these types of climbs to end your hike, so I was careful.  I’m in my forties.  I have less bone calcium I’m told.  I did fall twice, but both times were near the bottom, when I got a little over confident and tried to skip over rocks a little too quickly.

There was some great river hiking,  and I spread out at some falls to dry out gear and eat lunch for an hour.  Falls are one of my favorite water features on the trail.  The peacefulness of the roaring water and constant movement calms all of the “chatter” in my head.   I have always enjoyed most any type of water, especially sleeping near it, although waking up with wet gear is not ideal.

I met several north bound hikers.  There also appeared to be several thrus day hiking or slack packing sections. Tin Cup stopped to chat for a few minutes.  I find that most of the older hikers enjoy the social aspect of the hike, and often stop to talk.  Some of the young ones do also, but to date those have only been the southerners…go figure.  I too am a sometimes chatty, south of the Mason Dixon hiker.

I took another short break up on one of the Barren Mountains.  I think I was on 32, although the guide only had four.  There were some great views that made the climb worthwhile, and like a large lizard I sprawled and sun worshiped at every opportunity.  As I heard other hikers approach, I would quickly convert my heaving sprawl to a stoic, thoughtful pose, appearing well rested as others passed, only to sprawl again as they moved out of sight.

I finally left the ridges and headed towards Wilson Falls, where I spotted some campsites down by the water, off to the side of the trail.  I had just begun to set up when I saw another hiker approaching.  She asked me how far it was to Wilson Valley Lean-to.  I told her it was at least 4 miles and she would be night hiking, and that she was of course welcome to camp down near the water since I saw multiple sites.  She said she would put on her head lamp and keep hiking, so I wished her luck.  Much like sprawling, continuing to hike when it appears others may think it too far for you, is necessary to maintain appearances, so I understood as she moved on in the quickly darkening forest.

I was bent over, continuing to set up my tarp, and smiled to myself as I heard her returning back down the trail.  She shouted down that she had changed her mind, and cut down the hill to the sites.  There is always safety in numbers.

The hikers name was Somer, and she was also from CT, and had gone to school in SC.  I think you can almost always find connections with people, and it never ceases to amaze me how small our human world is out here in the wilderness.  I too now lived in CT, and had gone to school in SC.  We sat and chatted as we ate dinner and I learned that this was only her second or third back packing trip, and she had chosen the 100 Mile Wilderness. I love initiative.  This was definitely a challenging section, for someone just beginning to backpack, but I expected Somer would finish.

I cooked dinner and at quickly, as she was still setting up camp.   It began to get chilly, and the mosquitoes were feasting, so I wished her a good night and headed for my shelter.  I fall asleep at dark, and get up at first light, and could already feel myself getting sleepy around 8PM.   I spent a little time nursing my feet before going to sleep. With all of the rain, and having them stay wet all day due to tromping through mud continuously, a few sores and blisters needed to be tended.  They usually dry out over night, and I was pleased to note that they were beginning to toughen up.

I listened to the rustling and clinking as Somer moved around her camp.  I enjoyed the solitude of backpacking solo, but I also appreciated the occasional comfort of knowing another human was nearby.