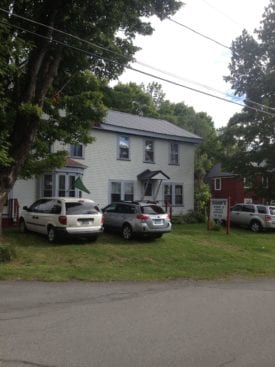 Light seeped into the trees, and as I peered out from under the edge of the tarp, I could see the trees just beginning to take form.  It was this tiny bit of light that always woke me from my sleep and sent other hikers burrowing into their bags.  Just before the day began, I loved the stillness and silence of the sleeping forest.  It was that gap of time after the nocturnal creatures had settled down for the day and day critters were beginning to stumble from their dens that I found the most peaceful.

I finished packing and strode past Somer’s tent, where I could hear some light rustling.  “Have a good hike,” I said as I passed by in the early morning dimness.   I glanced back over my shoulder and could see her just standing in front of her tent, moving very slowly as she stretched out the stiffness that all hikers feel in the first few days.  Who am I kidding, though?  I would hobble along for a good fifteen minutes while I worked out the kinks in my back and leg muscles.  I would also continue to hike through these early morning warming periods for the next two months.

I did not have many miles to travel to get to the road that would lead me into my first trail town of Monson, Maine, but the Maine woods were not going to let me go without a few parting nips. There were a lot of roots, mud, and rocks added to the last three miles, and I grimaced as I stumbled along the path, probably moving too fast in anticipation of hamburgers, showers, ice cream, pizza, and any number of other restaurant delicacies I could imagine.  The final shelter even had a rock wall for me to claw my way up, clinging to roots and muttering obscenities, before finishing my final three miles to the road.  I don’t consider the climbs much.  I glance towards the obstacles, drop my head, and start climbing, after a quick upwards glance, throwing my poles up as I climb.

I walked past all of the ponds as silently as possible.  The moose come out to eat at dawn and dusk, and I usually hear one of the big clunky beasts before I see one.  I had hoped to see one on the way into town but wasn’t lucky.

I could begin hearing traffic on the road about seven miles out.  It is always torture, and such a tease, as time slows down and you imagine all of the things that town has to offer – just within your reach as you round each corner, eagerly hoping to see the gap through the trees, with the road just beyond.  Occasionally, there is a surprise where you stride eagerly through the trees and undergrowth, and suddenly you are standing in the middle of a rocky trailhead parking lot or on a dirt shoulder beside the road!  Of course, these also offer their disadvantages.  The lack of traffic noises often means there is very little traffic, and I am about to have a tough time hitching a ride.

Finally reaching the gravel parking lot, I pulled out my phone and called Dana from Shaw’s Hiker Hostel to shuttle me away to nirvana.  Dana immediately answered and said she was on her way.  Ten minutes later, she was pulling into the parking lot in a shower of gravel.   Shaw’s was the classic boarding house that I remembered when I had stayed once before. There were bunk rooms, single rooms, tents, showers, and laundry.

The boarding house was a central hub for travelers, with the courtyard and parking area out back being where everyone congregated and hung out.  People were constantly coming and going, both hikers and travelers, from all walks of life.

I had booked a private room and headed straight upstairs to put my pack in the room.  I spread out all of my dirty, nasty clothes and gear – a pack explosion across the room, and then dug to the bottom of the pack for the one change of clean clothes I always kept.  After going downstairs, I headed straight for the bathroom to get a clean towel from the giant pile they kept stacked neatly outside the laundry room.  Many hikers head straight for the food, but as an ambassador or the trail, I always try to clean up before heading into town.

The house was about half full, with a common subject among other travelers and hikers being the female hiker missing south of Stratton.  There was still no trace of her, which seemed odd to many people discussing the situation.  Everybody seemed to have different ideas about what happened, and several seemed very upset by the situation.  I met one female hiker that was no longer comfortable hiking solo and was considering going home.

As stated in an earlier blog article, her body was found two years later, 1,000 feet off the trail.  She had died of starvation and dehydration in her sleeping bag inside her tent.  It was a tragic accident.

I went downstairs to the lounge and began talking to Shelley.  She and her husband, Tom, were retired and vacationing in the area.  There are few places to stay in these tiny Maine towns, and they landed at Shaws.  We all decided to go to dinner and went down to the Lakeshore House.  The food and conversation were good, but I grew tired as the sun sank, and we left as soon as we finished.  My body’s rhythms have adjusted to dawn and dusk.

When I returned home, I got my clothes from the laundry room.  I had thrown them in the washer when I left for dinner, and someone had dried them and piled them on top of the dryer so they could dry their clothes.  I  closed the door to my bedroom and began organizing all of my gear.  I washed my pot, toothbrush, peanut butter rehydration jar, water bottles, etc., and then packed all my clothes and gear in my backpack.  I wouldn’t say I liked to rush, and I was trying very hard to avoid stress on this hike.  I wanted to do one thing in the morning – relax and eat the massive breakfast I had heard so many good things about.  I climbed into bed and relaxed.  It was good to sleep early, knowing I would get little sleep on this soft, springy mattress.

To summarize the 100 Mile Wilderness – it was Maine at its finest and as tough as I remembered.  I completed it in six days and made some changes, but they were long days, and I had to push through certain sections to make the miles I was trying to achieve.  I had worked out before this hike, and having a strong core, made a world of difference.  I’ve started many long-distance hikes out of shape, knowing the trail would always beat me into the shape needed to finish the trip.  This time I had decided to get in shape, and it was amazing what a difference it made – mostly in my enjoyment of the first couple of weeks.

One of the highlights of the 100 Mile Wilderness was White House Landing.  The neat rustic camp, functioning on only propane and solar, was a great stop. The food and owners were super, and I would highly recommend this camp, whether going SOBO or NOBO.  It is worth the stop.

The terrain after White Cap Mountain became more rugged, with many small but steep ups and downs.  There were many people in the Wilderness…many more than I expected.  It appears August is peak season.  There were a lot of youth groups, and they all seemed to camp around the shelters and in established camping sites.  At least two occasions, I had to move on to find another location, but it was good to see the kids out having a good time.