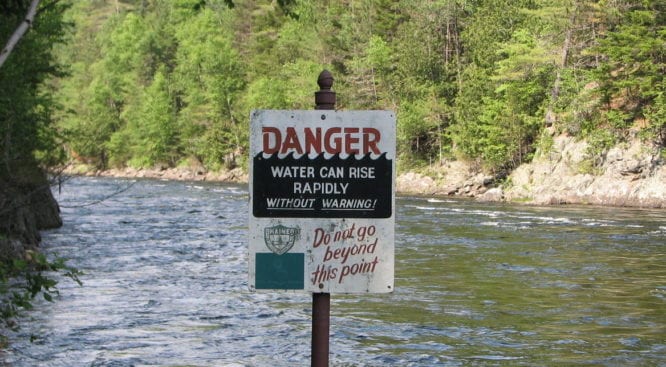 I always chuckle as I look out over the Maine “Ponds,” and Moxie Bald Pond was no different. I could comfortably float a large yacht on this lake – or maybe several. They would have to be outfitted for impacting huge boulders, but they would fit. The ponds I come from consist of weed-choked, oversized mud puddles with angry, massive snapping turtles and even bigger gators. The smaller the pond, the larger the monster.   We also don’t have loons that wake us at 4 AM, only frogs that sing in chorus until about 2 AM, but at least they let us get the best early morning sleep.   Thus, I was awakened at 4 AM this morning by two lone, frisky loons, deciding to begin serenading me or each other, directly outside my tent, on the edge of the lake (pond).

What odds would I get the only lonely couple in the sea with a slight ocean outside my door?   I finally gave up sleeping after thrashing, tossing, and muttering for two hours and was hiking by 6 AM.   I munched on my Big Sur bar as I climbed up Moxie Bald, thinking about how I would never be able to eat these 630-calorie bars in my other life. At home, I would be gulping down coffee with skim milk as I raced out the door for a meeting while trying not to dribble down my blouse. But, unlike any other bars I take on hikes, I enjoyed this dessert bar. Granola, dates, chocolate, nuts – it was fantastic.

The SOBO injury theme continued, as I met another gimpy hiker named Luke today. Unfortunately, he had also injured his knee and was only doing about eight miles per day. I felt badly for him and almost offered to carry his pack for a bit. We chatted a few minutes before I headed on down the trail, turning back to wish him luck. I never saw him again, but out here that means nothing. You can meet someone once and then have them hike one day ahead of you for three months, only knowing they are there by signing shelter logs. It is kind of crazy sometimes, as I have pushed huge mile days to catch up, gotten off trail for 2 or 3 days – and still had them stay ONE DAY AHEAD OF ME. I see a horror novella there.

Around mid-morning, I came upon some power lines, where I found Tenderfoot and Lucy (mother & daughter) picking blueberries. I usually hurry through these open, power line areas due to the occasional snap, crackle and pop I hear overhead, but decided to stop for a snack, and chat a little. They were fun conversation,  and it ends up that Lucy and her family were also from CT. I wished them well and headed out after I felt my neck hairs starting to rise from the static.

While we chatted, Tenderfoot informed me there was another small mountain in 4 miles. Hiker advice is always very subjective. You could be advised by people covering the spectrum of Olympic athlete to first time day hiker. Upon completion, I referred to it as “Endless Mountain,” and decided that Tenderfoot obviously was closer to the Olympian end of the range. Because I was told it was “small,”  I charged up the incline, only to find myself still climbing hard over an hour later. As I whined and moaned my way to the summit, I heard the conversation and saw three generations of a Maine family that had hiked to the top to….wait, wait…CHECK THEIR PHONES! They had climbed straight up three miles to get a signal. I just stood there staring at them in disbelief as the grandparents sprawled across the rocks grinning at me. They were old enough to know exactly what I was thinking.   None of them appeared to be in Olympian shape, yet they were totally relaxed and happy, while I bitched, moaned and griped all the way up the mountain. I really do think it is all about setting expectations. They knew exactly what to expect. I on the other hand, was set up for FAILURE.

I finally reached Caratunk, ME around 6PM, and just stared across the road. It was a multiple dwelling town, but I saw zero humans, and as in many dark, scary movies, it was dusk.   Again – a novella here. I crossed the road, and saw a woman walking towards me. She announced herself as Post Mistress Marie, and said she was  out for a stroll. I was about as shocked to learn there was a working post office (I had assumed my guide defective) as I was to see a human. She offered to show me where I could locate the contact information for shuttles, and I walked with her back to the post office where she showed me the phone to use to call either the Sterling Hostel or Northern Outdoor Center. I chose the Outdoor Center because it advertised a bar with it’s own brew, and called to reserve a room and get a shuttle. Interestingly, the shuttle was provided by Sterling Hostel, to take me to their competition. Like many other things when hiking, “competition” is subjective.

I arrived at Northern Outdoors late, but was able to at least eat and soak my feet, with eating being my priority. I’m all about short term gains and immediate gratification. I then cleaned some gear and repacked, so I was prepared to enjoy a long breakfast before heading out first thing in the morning. I wanted  to catch the recommended Ferry over the Kennebec River. Sadly, a hiker had drowned here, in the past, and since water is released daily at the damn, hikers are asked to take a canoe across the river. I hear there are still some hikers that choose to ford the unpredictable and fast flowing river. I though, am not one of those adventurous souls.