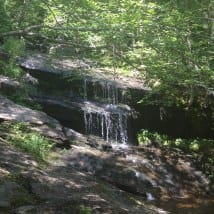 David took me, Sandman and Dano back to the trail after breakfast.  There was a group of NOBO’s that had camped by the stream, and they poured eagerly from the woods as we pulled up.  We were quickly surrounded by a thin, excited group of waif like humans, all headed back to town with David.  We bid Dano goodbye and congratulations, and Sandman and I headed south.  Dano would soon finish his journey at Katahdin, while I had still basically just begun.  He would be sitting down nightly to hot town food, while I sucked on jerky, and abided to the five minute rule (or greater), for those dropped dribbles of cold tuna.  I had no doubt, that if a glimmer of wondering about my journey even flashed through his mind, I would be greatly envied.

The climb up and out of the notch between mountains, over Moody Mountain, was steep, with a jumble of boulders intermingled with large slabs of rock, and tangled masses of thick, gnarly roots.  The rock slabs were tiring because they often required climbing that broke my stride and rhythm, sometimes even resulting in hand over hand maneuvering. At times, I found I moved more quickly up these slabs of rough granite because of the focus I needed to find foot and hand holds, and actually prefered these climbs to the long, slow slogs uphill, as long as I was actually going up, and not moving down slick rock slopes, that waited to peel away skin with one slip.

There was a lot of climbing over the course of the day, and Sandman and I stopped at East B Hill for lunch.  We had about four miles up to Frye Notch Lean-to and we set off, but about 30 minutes from the lean-to poor Sandman sat down on a log. It had been a long day and he was tired.  He always set a good speed, and often stayed ahead of me, but I was more constant, and had more endurance, so typically arrived to locations first or around the same time.  This statement provides me ZERO bragging rights since Sandman was significantly older than me.  He was a good, tough hiker, and although he appeared as if he had just lost an important battle, with his clothes covered in blood from endless falls, I knew he would always finish, and finish up near the front of the pack.  I told him we were close, and he glanced up at me, and said he hoped so, as he slowly stood and gathered himself for the next climb.

We arrived in Frye Notch to find a man at the shelter, that had hiked in five miles to bring plums and maple sugar cookies to hikers for the evening.  This is often referred to as trail magic, and the longer you have been out of town, then more magical it becomes.  I wandered up past the shelter, to search for a campsite to set up my tent, while Sandman sat down in the shelter and chatted with the magical hiker, and ate his treats. After a bit, he stopped by where I had set up, and said he was going to find a spot to set up his camp, skip dinner, and go to sleep. I felt badly. I enjoy hiking late, but it was probably later than he wanted to hike.   I had also committed to hiking the White’s with him, due to their reputation, but I would need to reduce the daily hours I hiked.

I went down to the shelter to thank the day hiker for the food, and chatted with NOBO hiker “Lush” about the terrain to the north and south.   He seemed disappointed when I told him he still had some tough days ahead, but I hoped again that this was relative and he would find them easy.  I had been out several weeks, and him several months.  I expected he would chuckle to himself as he strode over the ridges.  As it turned dark, I headed back up to my tarp, and stopped by to check on Sandman. He seemed to be doing well, relaxing in his tiny bubble tent.

I tucked into my quilt, popped a couple of Vitamin I for my achy knees, and quickly fell asleep.