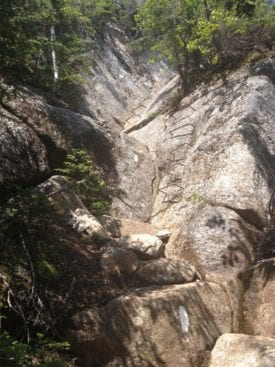 Well, today I lost Sandman.   I had sat down on the side of the trail to empty my shoes of small, sharp rocks, and told him I would catch up with him.  I knew I probably would not catch him soon, but that was alright.  I needed a little “me” time.  I was a solo hiker that actually preferred hiking solo.   I liked Sandman a lot, but was beginning to feel the “itch” to be free again – to stop when I wanted to stop, hike as fast or slow as I wanted, and to generally not feel the need to look for, or wonder about another person.  My time alone had always been precious to me on these trails – probably because I got so little of it at home, where I spent 80 hours a week, working.   These journeys were always my escapes from daily responsibilities, with the biggest worries being the weather, where to find water, and what I would eat next.  They really were my selfish journeys I guess.

We had left Frye Notch that morning, and started an immediate climb over Bald Pate, via a few ladders and a little hand over hand rock scrambling.  Working our way down to Hwy 26, we staked out a couple of picnic tables in the shade, where we ate lunch and chatted with a couple of hikers doing a week long section hike.  I was pretty excited, as there was also a privy and garbage cans.  It is the small luxuries that can break up your day, and really add a little “bit of home.”  The toilets may not fslush, but it was nice to just be able to sit and relax without quivering quad muscles.

After moving ahead of me on the trail, Sandman had apparently missed his turn, and headed on up Old Speck for another couple of miles.  Upon reaching Old Speck campsite, I had headed over to the shelter to see if Sandman was taking a break.  We had agreed to meet at the Shelter if separated.  Finding it empty, I had headed around the pond towards the Mahoosuc Arm.  I was ambivalent about hiking down the arm because I had heard so many horror stories, so I sat down on a large boulder and waited for Sandman before starting the climb down.

I asked other hikers passing by me, perched on my rock,  if they had seen him, but it appears everyone hiking that day was in their mid-sixties with a big white beard.  Several people told me they either did not remember or they said “everyone had started to look the same.”  Clearly, bearded old men with bright, white, fluffy beards were quite common on this stretch of trail.  I had obviously not been paying attention, as they had all managed to pass me unnoticed.

I was headed over to the top of the Mahoosuc Arm at the Mays Trail junction, when I got a text from Sandman asking where I was, and saying that he was a couple of miles south of Spec campsite.   Hmmmm…that is where I was, so I again sat on a rock and waited….and waited.  Every once in a while I would yell out Sandman’s name, but never got a response, just a few odd looks from passing hikers.

It was starting to get late, so I finally headed down the Arm thinking I may have missed him, and occasionally hollering out “Sandman, where art thou Sandman.” I got a few section hiker responses (mostly grunts) but no Sandman.   Could there have been other trails, also headed down the Arm?

The Arm was not as bad as I recalled.  I picked and slid my way down roots, and slabs of granite, hanging off small trees and chattering at section hikers as they worked to pull themselves up.   I’m not a chatterer by nature, but a little sadistic at times, and mostly asked questions because it was fun watching the climbers try and respond between gasps.

Finally reaching the bottom of the Arm, I decided to save the Mahoosuc Notch for the next morning, hoping Sandman would catch up.  I knew it would be a tough rock scramble, and we had been discussing this particular rock scramble for several days.  I knew he would prefer to do it with me, rather than alone.

The camp sites were open, and really nice, and I set up just as it started to rain.  I frowned to myself as I thought of the slippery boulder scramble this rain would potentially create tomorrow.  The Mahoosuc Notch was notorious for being the hardest mile hiked on the Appalachian Trail.