Buried in a stinky bog….. 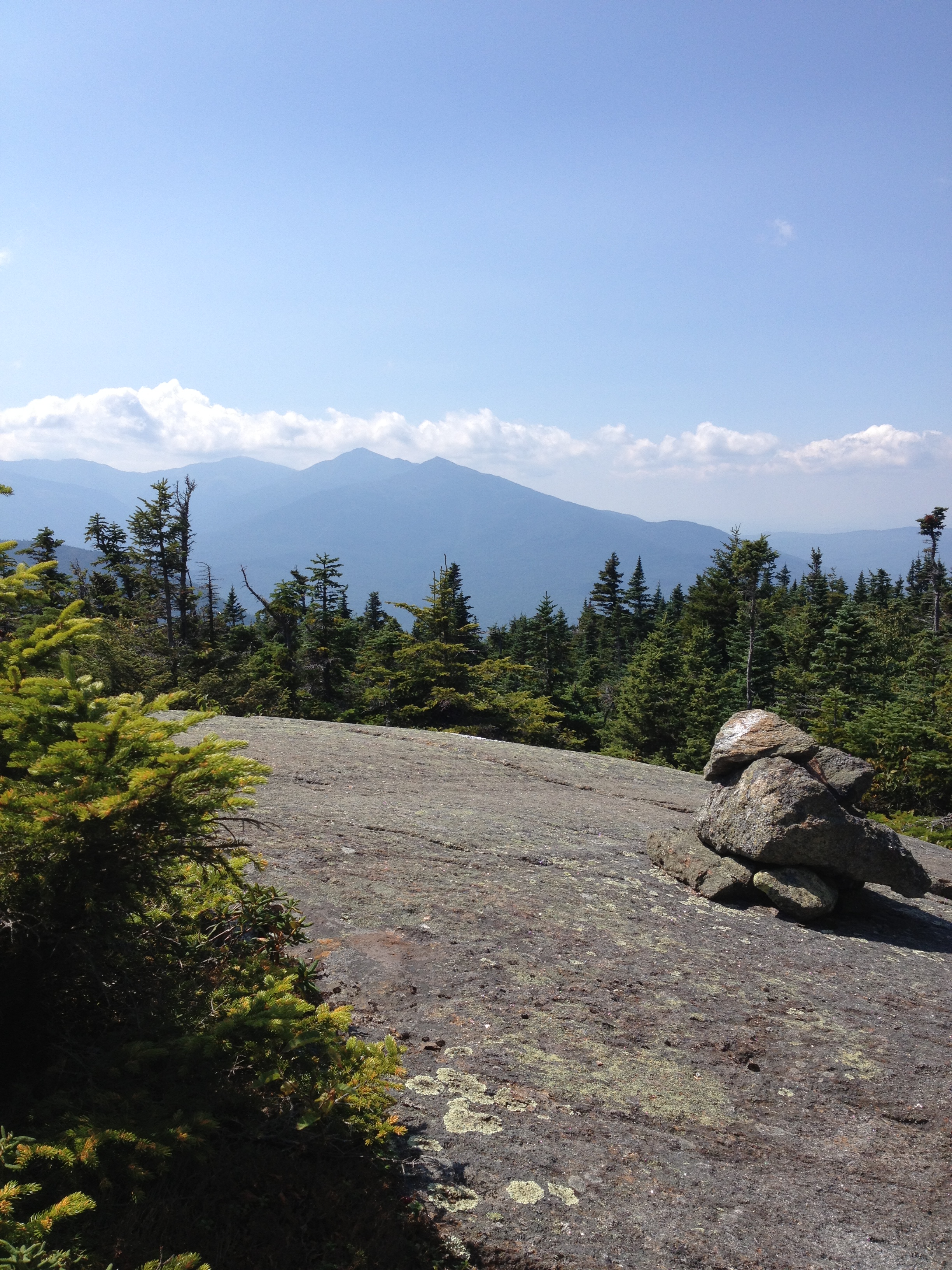 Maine gave me more hard earned miles today, but that did not include a wet, slippery Mahoosuc Notch, thank god.  Due to lack of condensation, and a front that must have been hot on the heals of the showers last night, the huge granite boulders had dried out while I slept.   I slept in a little, thinking Sandman might tackle the Arm early, and show up, but I finally gave up (patience being a weaker quality of mine), and headed for the “hardest mile on the Appalachian trail.”

Coming to the first visible boulders in the notch, I strapped my poles onto my pack, and spent the next two hours hauling my old body over and under (mostly over) very large rocks.   Classic climbing posses included splits over 6-7 foot crevasses, profanity fueled leaps, over chasms pushing out icy gusts of air, and pant ripping butt slides down slabs of rough granite.  I am sure lean, young NOBO’s danced across the tops of the rocks, but I literally dragged my poor old body over and under the rocks, taking the pack off to haul it up behind me, or shove it up ahead of me.  It took me two hours to cover the mile, and hands down the best part was reaching the end, only to discover I needed to climb straight up out of the Notch.

Seriously though, I actually enjoyed it, and it was the first time on this hike my upper body got the more intense work out.  By the time I reached the end, my little T-Rex arms were trembling with fatigue.    It was a good thing I did not need them for my climb up to Carlo Col, where I waited a while for Sandman.   As my muscles began to tighten, and sweat began to dry, I moved on, but after about 50 fee I came to an abrupt halt.  The trail ended at a huge wall of granite.

I looked straight up at the tumble of large car size rocks, and turned slowly in a circle. The trail must have veered off in another direction, but there was no opening to either side of the rocks.  I turned again to stare straight ahead at the grey slabs, and slowly looked up, running my eyes back and forth across the rock.  I groaned quietly as I saw a very light blaze on the rock.  I walked over to take a closer look.  Maybe it was just a light streak of moss.  Looking more closely, I realized it was a faded streak of paint leading me straight up the rock.  I dropped my head and breathed in a big gulp of air.  These were the climbs that completely required my mind.  At my age I was also very conscious of matter.

I stood there a moment before taking off my pack.  I shoved the pack, and my poles, up over the left side of the first tall rock.  I then used a small tree (twigs are commonly clung to as life lines) and wedged myself between two boulders, dragging myself up the other side of the rock.   I was far less than graceful, and left a little skin on the rocks, but slowly made my way to the top of the taller boulder on the right side.  Upon reaching the top, I peered over the boulder to my left and frowned, seeing that I needed to climb back down the other side of the rock I had just climbed up, to get my pack and poles.  As in other poorly thought out decisions, this one also resulted in incremental, unnecessary work.

Sliding down to my pack, I attached my poles to the outside of it, strapped the pack tightly to my body so it would not shift, and began what had become a common chant for me here in southern Maine.  Climbing hand over hand, and bent over so I kept four points of contact, I scrambled up the rocks mumbling “Don’t look down” over and over under my breath.   I’m sure I resembled some giant awkward water bug as I scuttled across what others probably strode across with ease.

Reaching the top, and rounding a curve I found a rather disillusioned couple sitting, staring at the ground.  The man looked up and sarcastically said “Watch out for the 20′ ladder, cliffs and metal rungs.”  I smiled, said thanks, and told them there were a few of the same things in the other direction.  The girl immediately looked up with tears in her eyes, and told the man that they were not going the way I had just come from.  They began to argue about hiking further, so I figured it better I leave them to discuss, and headed on down the trail.

Moving out of sight of the couple, I almost immediately came to the longest wooden ladder I had seen yet, and just threw down my poles and began to climb down.  I learned long ago not to give these obstacles too much thought, or they began to play on my natural fears, so like many obstacles I had and would encounter, I just took it head on.  My inside voice whispered, “Hundreds have done this.  How dangerous can it really be.”

Moving away from the ladder, and wiping my sweaty hands on my shorts, I came to a sudden drop off just a few minutes later.  I stood looking down,  and noticed some iron rungs off to my left.  To reach them,  I would have to walk across a six inch ledge.  I frowned and just kept moving, hugging the rock face and shimmying across the six inch “trail.”  Reaching the other side, I realized there was not enough room to turn and work my way down, so I awkwardly unhooked my pack, and dropped it to the ground below,  so I could turn and come at the rungs from a better angle.

Making it through this obstacle course, I set my sites for Gentian.  I quickly met a NOBO who told me to beware the mud bogs coming up.  If not mentioned, there would have probably been no issue.  I reached a large bog a few minutes later, and stood there for a few minutes over analyzing the crossing.  I have pretty good balance, and as I perched atop a rock on my left toes, I KNEW I could stretch my right foot to the plank that snaked across the mud bog, linked to other planks.  I lunged out, and my toe just nipped the front edge of the plank before my leg plunged thigh deep into the nasty, black, gross muck!  Holy moly it was deep.  Suction wrapped around my submerged leg, and I was trapped due to my shoe acting as an anchor.   My only recourse was to pull my foot out of the shoe, and then try to retrieve my shoe from the muck.

I pulled myself up onto the plank, and sat back on the end of the bog to evaluate the situation.  I was missing my shoe and a hiking pole.  I considered them both business critical items.  Realizing I had no choice, I plunged my arm into the muck, up to my face, and fished around for the shoe, as visions of things with sharp, pointy teeth, latching onto my arm, danced around in my head!  I have a powerful imagination, and have read way too much Stephen King.  The cold, black muck smelled awful!  There was no telling how many decayed corpses were down there.  I finally located a shoe lace with my fingertips and dragged out the missing shoe.  I then scratched and dug until I located the missing hiking pole, thankfully only submerged about four inches in the noxious bog.

I was absolutely disgusting, with smears and globs of the nasty decaying mud stuck all over me – on my clothes, skin, in my hair.  I scraped off as much of the stuff as possible and moved on, before meeting another hiker about one minute later.   I just looked at him and said “I fell in a bog.”  He grinned back, looked me up and down, and said “I see that.”  I was just glad he was not there to witness me laying outstretched, with my face and arm buried in that nastiness.  I grunted something unintelligible, and scurried on past him.  I seriously needed to find a water source.  I was filthy and smelled like something dead.

Over the course of the day, more than one passing NOBO had told me that Mt. Success was a beast, so I mentally steeled myself as I started the climb.  While it was a steep up and down, it was short, and did not quite meet the image my mind had conjured.  There were also nice views up top, where I was able to relax and do a little scraping at the bog crust on my skin.  I hoped to find a stream on the way down the other side.

I was in luck on my climb down.  I came to a creek, cleaned off, and got water for the evening.  It was now late afternoon, so I poured noodles and dried vegetables into my peanut butter jar, so they could rehydrate while I walked on into the evening.  I was only going to hike about another hour before beginning to look for a place to camp.

As the sun began to set, and shadows lengthened across the trail, I saw what appeared to be a faint game trail off to my left.  I followed it a short ways into the spruce trees, where I found a small spot to set up my tarp.  I smoothed out the small needle covered spot, throwing out sticks, cones and rocks, so I could sleep relatively lumpless for the night.  I staked out the tarp, laid out my bag to allow it to fluff for the evening, and walked over to a small boulder, where I sat and ate my dinner.   Dinner consisted of my rehydrated noodles and vegetables, with a pouch tuna mixed into the concoction.  I would not have chosen this at home, but out here it was so dang good!

Later that evening,  I awoke to a great deal of huffing, puffing and stomping of large hooves.  I may have stolen the sleeping location of some very large animal, but was too tired to really worry about it.  I rolled over, facing the other direction.  I was here first.

previousLosing Sandman & The Mahoosuc Notch
nextA Moose in the Gauntlet!