A Moose in the Gauntlet! 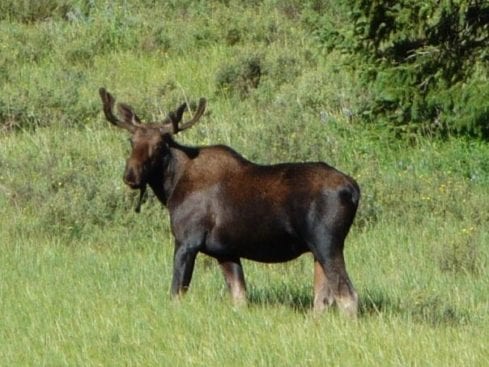 My last day in southern Maine – bring on the Gauntlet I thought, as I stretched out under my quilt, listening to the pops and creaks of my battered body.  My muscles were stiff and sore as I mentally counted down in my head.  I always had to pump myself up mentally before I threw back my quilt, and quickly put on my down jacket, that often substituted as a pillow, followed by my bright Pinkish-red (I can’t spell fucia) fleece hat.  The down was flat and matted, but at least it would be warm as it puffed up around me, while I chewed on a, typically Raspberry, Pop-tart.

I grinned as I smacked on a mouthful of pure gummy, sugary jam, and dribbled crumbs all over my quilt.  It was a freakin town day!  I was headed into Gorham, NH, so throw what you had at me Maine.  I was about to enter my second state!   Maine had been a beautiful and rugged state, making a SOBO start very challenging, and very rewarding, and it felt good to finally be crossing a state line.   Some hikers think the White’s of New Hampshire are the hardest part of the trail, but I don’t think they hold a candle to the ruggedness of southern Maine.  I was also about to encounter a Maine Moose, making this section even more memorable.

Wild life sightings are one of my favorite parts of these hikes, and also one of the reasons I prefer hiking solo….less noise.  I tip toed over a bog bridge before Gentian and about had a heart attack at the same time the bull moose right next to me about had his.   I had been watching the plank bridge in front of me – focused on not losing clothing again, to the murky black bog, when I heard a “large” noise, and slowly looked up.  Mr. Moose was only a few feet away,  and we stared at each other for a second or two.   I swear I saw his eyes widen before he whirled and leapt over the plank ahead of me.  He was a very large and awkward creature, but he could move!

I watched as he ran alongside the bridge, ahead of me about 40 feet before turning to look back.   There was a look of shock as he realized that I was still following him.   He repeated this exact same action about three more times, as I ambled along behind him, leaping back and forth over the bog bridge.  On occasion he stumbled over the bridge, and I was scared for him as his long, gangly legs collided repeatedly with the hard logs/planks.  This went on for several minutes, with him repeatedly looking back to stare at me before charging ahead again in a burst of frantic panic.  I had slowed to let him get ahead, hoping he would turn off into the woods, and finally at an intersection, he went straight and I turned right.  It was a wonderful experience, and I had 6 or 7 great photo ops, but wait, wait….my iPhone was DEAD!  I had failed to charge it in Andhover, ME.  I marched on disgusted, hoping he had not hurt himself too much.

Since I did not get a picture that day, I’ve included a picture of my moose from the Continental Divide Trail.  I will have to say that the AT moose was much skinnier, and more skittish, than the CDT moose, but I probably would be too with humans chasing me repeatedly.

That day’s hike was nice.  There was not a whole lot of exertion required, and the AT spit me out on the road with time to spare for the day.  I walked out to Rt. 2 where there was a hostel I had heard a lot of good things about, but I wanted to head into town.  This would be my first zero day with no hiking, and I had a lot of chores I needed to get done, so I bypassed the hostel, and stuck out my thumb, where rather quickly, a retired military chaplain picked me up.  He was from VT, but vacationing in Gorham with his family.  We chatted on the ride in to town, and time flew by quickly.  He was a super nice guy.

The Chaplain dropped me off at Hiker’s paradise.  It was a motel with a hostel attached to a very small restaurant, out of which they served breakfast.  I had stayed here in the past, and was surprised to see it still being run by Bruno and his wife.  Both they, and the motel, had weathered time in about the same manner here in the brutal northlands, and it was good to see both again.  Bruno and his wife were always very pleasant, and I enjoyed chatting with them.  I put my stuff in my room, took a shower, and then headed off to wash clothes and try to rent a little car for the next day. This was a spread out town and I would probably need to head over a town to get a car.

Fortunately, I found an Enterprise that was willing to bring me a car.  Let the chores begin!