Train to New York City sounds like a song.  Imagine stepping out of peace and solitude, surrounded by the glory of nature, and boarding a loud, clanking, iron horse bound for one of the largest, densest cities in the world.   From being lucky to seeing five people a day, to the crush of humanity in an hour. 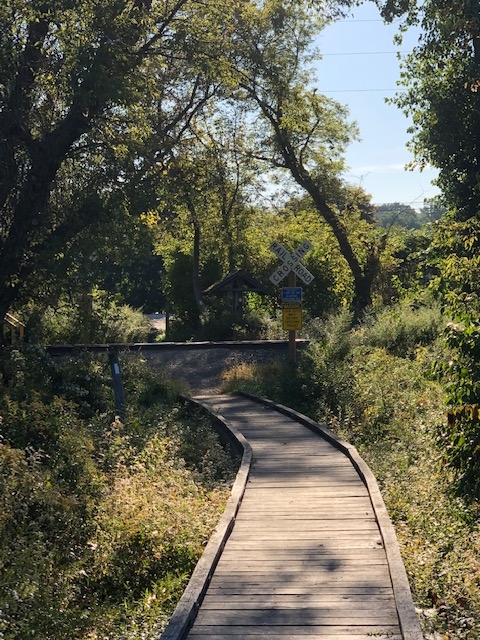 On the weekend, the very limited trail side parking area fills up quickly, so I made sure I got there early.  If full, there is another pull off area a few hundred yards up on the right.  You can park up there and walk back down the road to the trail head. 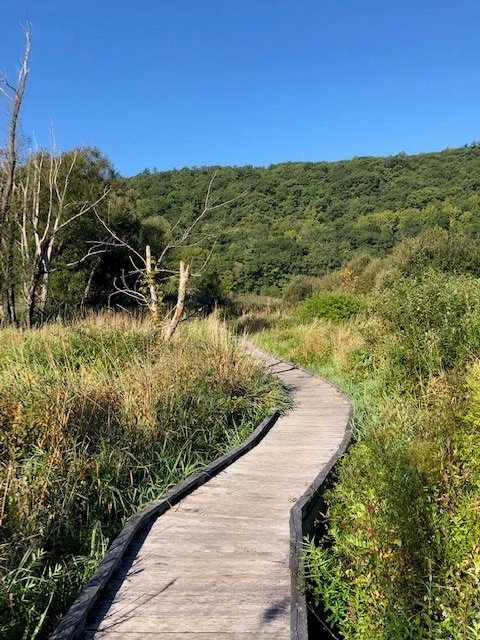 Heading south over the railroad tracks, the first 3/10’s of a mile was one of my favorite sections of the hike, traversing a lengthy boardwalk that wound it’s way through a beautiful, mature marsh.  I especially love this walk in late fall afternoons with the contrast between the grasses and the blasts of color rising in the background.

I walked this boardwalk when it was first built, and marveled at the work involved to complete the project.  The boardwalk even offers Adirondack chairs to relax in, at various spots along this section. 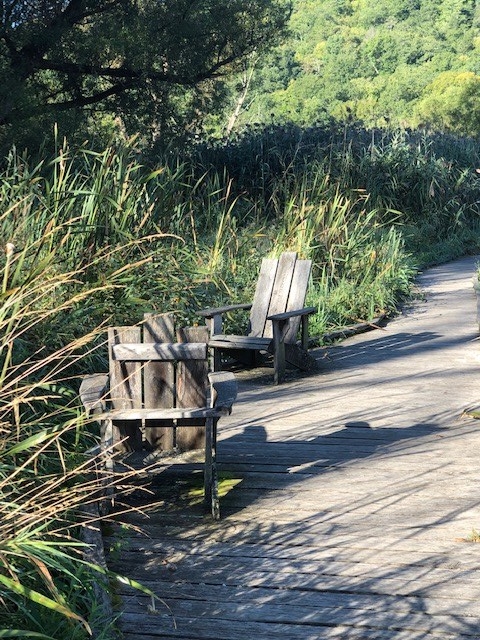 The boardwalk has been well kept, but I noted a few rotten boards that would probably need to be replaced soon.  I watched my step a little more than I would have normally.

The marsh grasses were beginning to take over, but I enjoyed the “grass tunnels”  that offered a little  “wildness” on the walk.  Again though, a little caution here.  I about got taken out by a Kamikaze marsh bird as I rounded a corner.  This is clearly one of their primary runways! 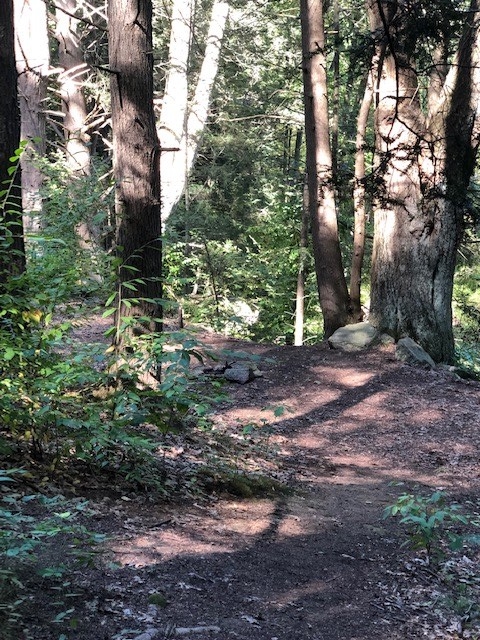 Leaving the boardwalk, I crossed a large creek, via bridge, took a right, and headed up through hardwood forests for about a mile.  It is habit for me to scout out campsites as I hike, and I spotted an established spot, on the right, about 3/10’s of a mile up the trail.

There was probably room to hold about 2-4 tarps/tents, depending on their size.  If you like cowboy camping with the creepie crawlies, you could sandwich in a good size “Tramily!”  Personally, I leave the cowboy camping for the west, where I get far less uninvited visitors in my sleeping bag. 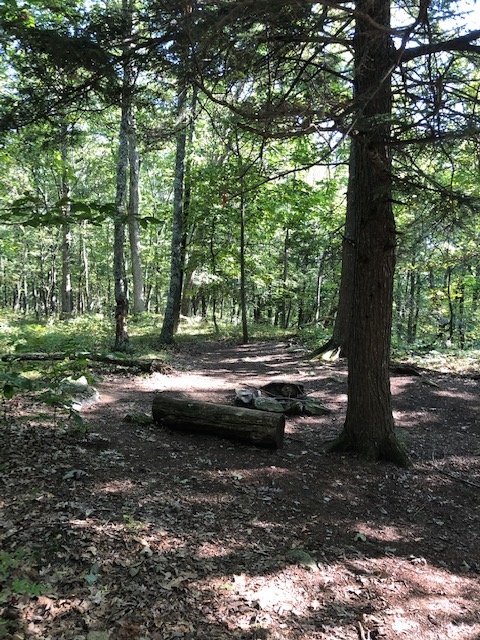 Reaching the top of the climb, I found another well established camp site.  A larger group could have camped here since the hard woods were open, and it was flat on top of the mountain.

The next mile wound through some more hard wood forest before transitioning to rolling meadows.  The trail traveled along the edge of these cultivated meadows, over log and plank boardwalks, and through a few low lying, muddy spots.

A couple of the boards were broken, and I ended up with wet shoes as I stepped down and sank ankle deep into water.  Ugh… 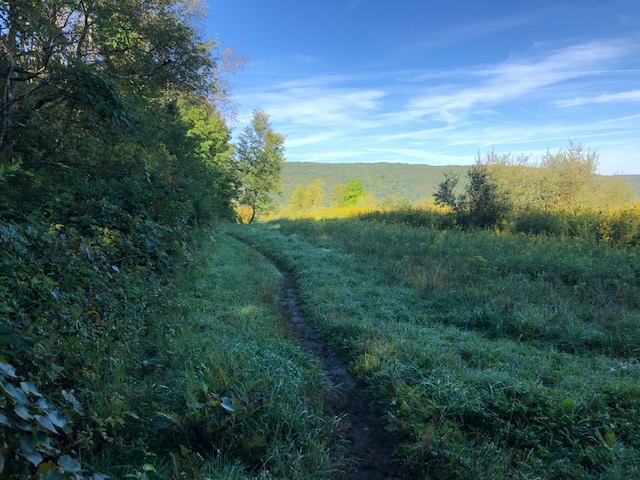 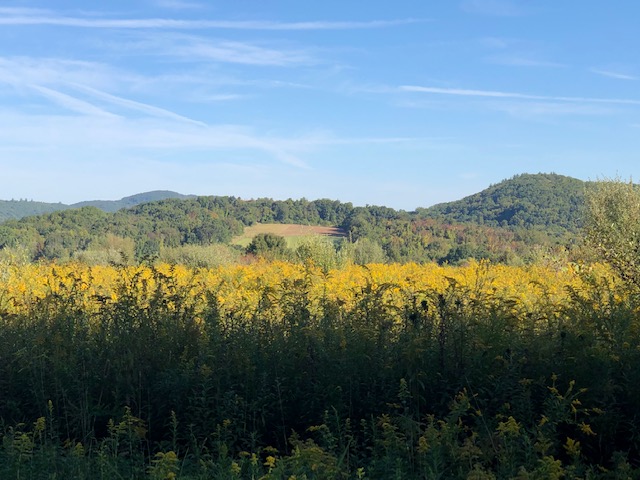 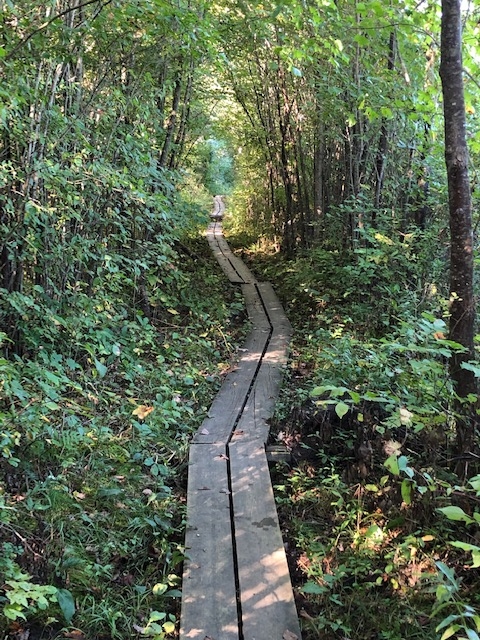 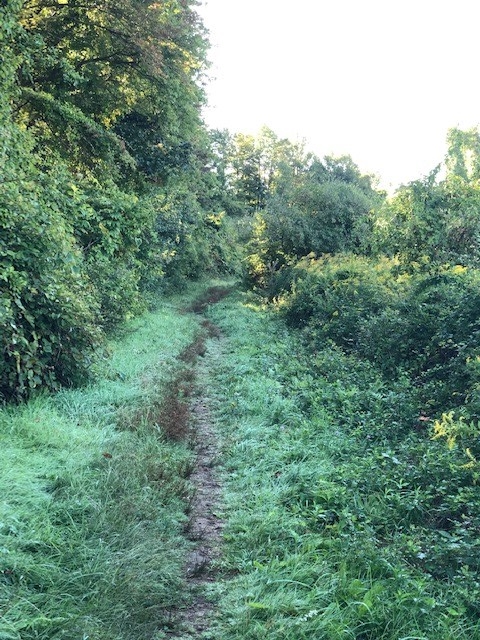 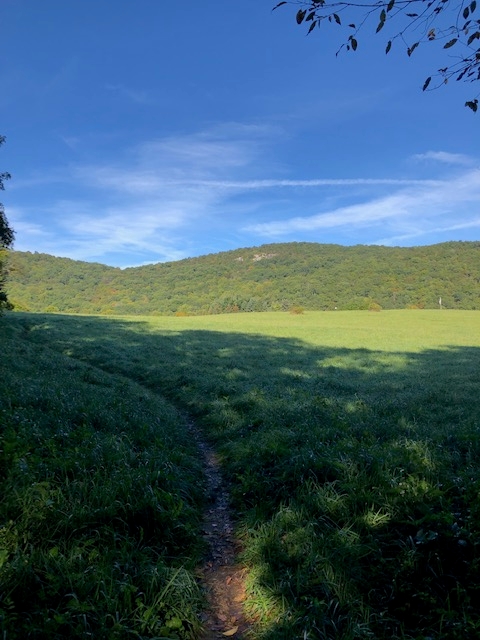 Glancing up, as I headed down towards West Dover Road (County Road 20), I saw West Mountain rising in the distance.  This would be my most significant climb of the day, and the views up top would offer a nice spot for lunch. 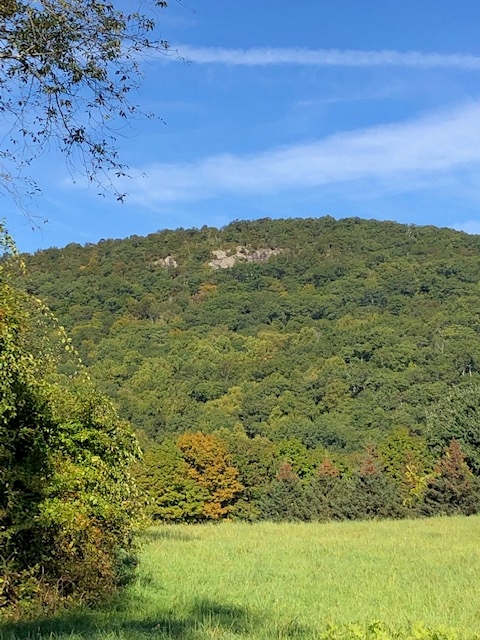 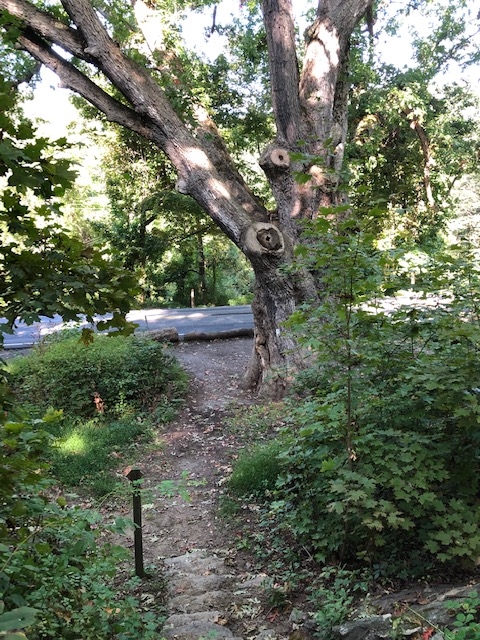 Pausing at West Dover Road, I looked up at the magnificent Dover Oak.  The tree is over 300 years old, and it is claimed to be the largest White Oak on the entire Appalachian Trail.

It was here that I met my first SOBO thru-hiker of the day.  He was sporting a neon-orange hat, and his trail name was “Orange Hat.”  Clearly, he has remained vigilant during hunting season, and prior to hunting season.  As I entered the shooting gallery near Nuclear Lake about an hour later, I recalled Orange Hat, and was sure he was relieved to have his bright accessory with him.

The next mile up to the top of West Mountain included passing the turn off for “Telephone Pioneer Shelter.”  I would stop in and check out the shelter on my way back.

I followed several hikers coming out from the shelter, and ended up following them to the top of the mountain, where we all stopped and ended up chatting for about a half hour.

They were out for a few days, and we ended up talking about the second most common backpacking topic (the first being food) – gear of course.  The husband was complaining about the weight of his pack, and I made a few suggestions.  I”m not the lightest, but I’m also not the heaviest.  I would say I’m probably about average. 🙂 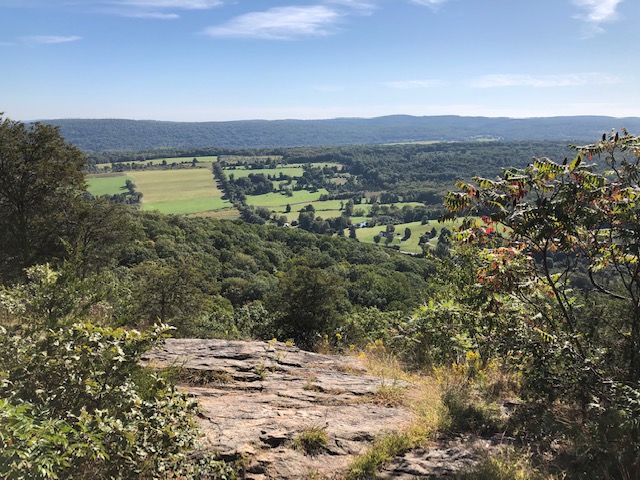 The top of West Mountain had the views for the today’s hike.  It had started to warm up a little, so there was a bit of haze.  The views were still beautiful, but I did not stay too long.  I wanted to get over to Nuclear Lake and back, so I could have lunch on West.

I wove across the top of the hill, over more layers of rock, and then headed down through more hard wood forest before reaching another low lying area with a convenient bridge.  This was definitely a well maintained section of trail. 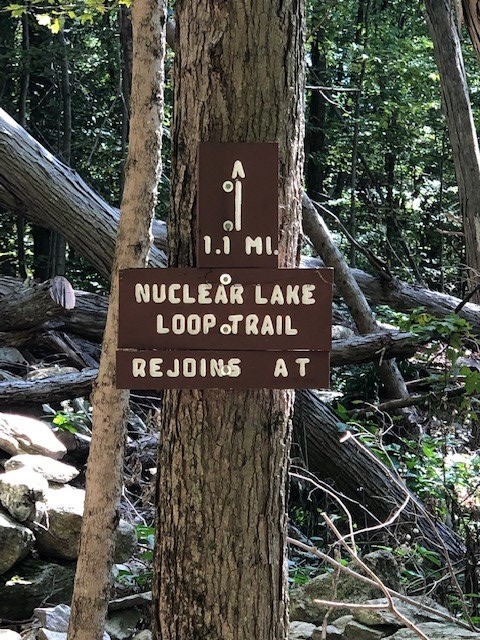 Nuclear Lake was my destination for the day.  There have always been rumors among hikers about not drinking the water or camping near the lake, but recent accounts have it perfectly safe.  It really is a beautiful area, although it does clearly post “No Camping” signs.  Hmm…

The actual story.  There was a nuclear research facility on the lake, and in 1972 a chemical explosion scattered plutonium dust throughout the surrounding woods and trails.  There were local rumors that drums of nuclear waste had also been sunk in the lake.  Both the woods and lake have supposedly been tested and searched, and there is neither radioactive residue in the woods, or drums in the lake – hmm.  I still find it just a tiny bit creepy, and picked up my speed as I passed.

I reached the AT junction at Nuclear Lake, and had a choice of taking a right and following the AT, or taking a left and circling Nuclear Lake.  I can’t imagine anyone going left.  It sounded as if a small war was taking place, with constant, escalating gun shots that made me want to duck and sprint back the way I had come.  I took a look at some maps when I got home later, and noted that “Pawling Mountain Club” was nearby.  Fridays must be very popular! 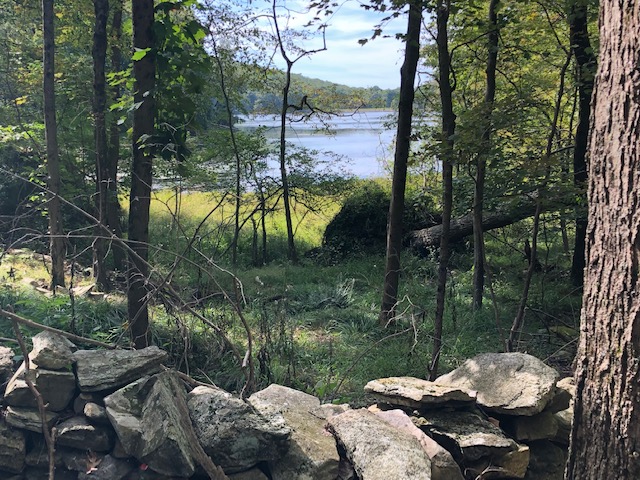 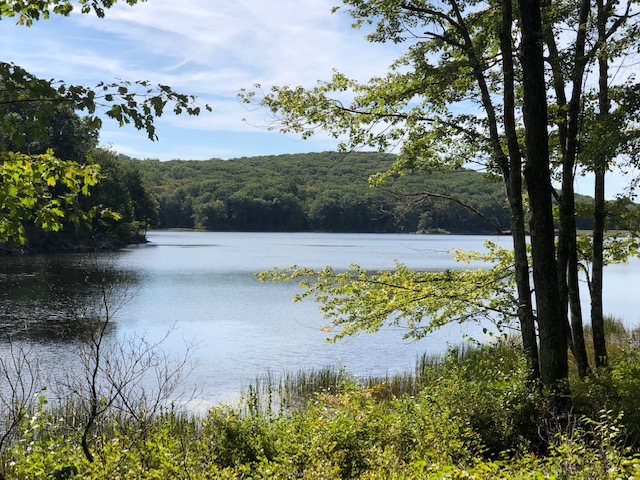 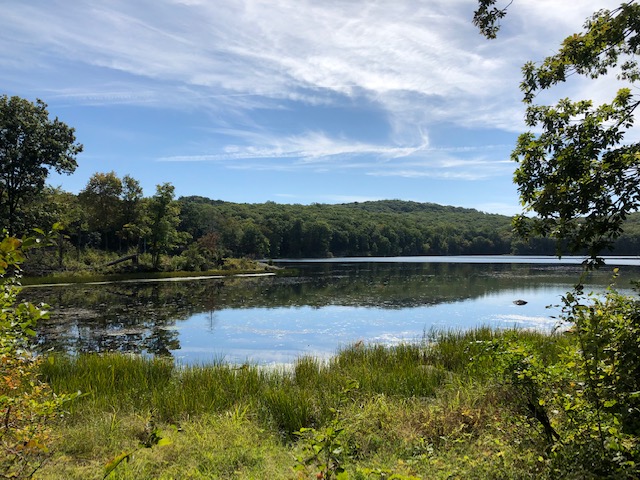 The short hike around Nuclear Lake was only about a tenth of a mile, and silent, other than gun shots of course.  The birds, frogs, animals, etc., were long gone.  I hoped it was due to the shooting gallery, but kept a close eye on the lakes edge as I moved quickly past the still water.

Trail turned to gravel, and then a grass road.  The roads around the lake were clearly well kept, but the gravel road did not appear to get much vehicle use, if any.  When the trail reached the edge of the woods, I did a u-turn and headed back towards West Mountain for lunch.  I was hungry, so I picked up my speed.

Hiking out to Nuclear Lake, I had met Sparky perusing her Guthook app.  I seldom met many AT hikers with actual maps.  She and her husband Trash Panda were trying to figure out where to exit the trail, and where to tell their families, coming in from Texas, to meet them.  We talked for a bit, and I told them that if they could make it to Dennytown Road the next day, I would pick them up and take them to a motel convenient for their traveling families to meet them.

Hiking back from Nuclear Lake, I met them again and we firmed up plans.  They would hike 25+ miles and meet me the next day for a ride.  I enjoy giving back when I could.  I’ve received so much support and help along the long trails, that I always feel these little bits of support are the least I can do for other hikers. 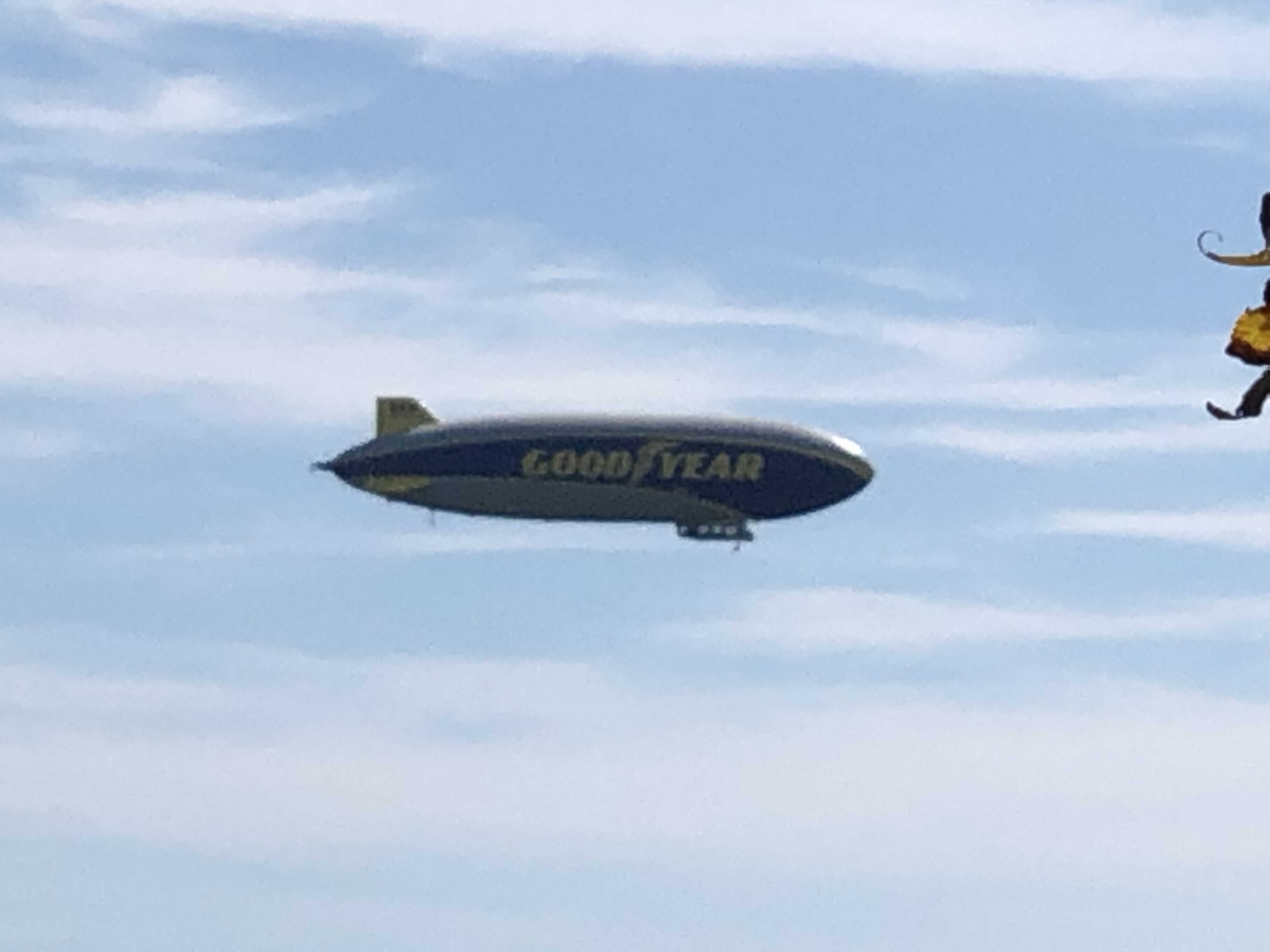 The 2.8 miles back to West Mountain passed quickly, as visions of PB&J and Wheat Thins danced before my eyes.  Upon reaching the top of the mountain, I spread out my feast, soaked in the views, and exclaimed in delight as the Good Year blimp soared past.  What perfect timing!  That big silent monster brought back happy memories from my child hood.

Where are the Day Hikers

I spent about 45 minutes eating, and then headed back down the mountain, passing numerous SOBO hikers along the way.  Over the course of the day’s hike, I passed 10 SOBO thru-hikers, and three section hikers.  I was the ONLY day hiker, which I found unusual for a Friday, especially on this section.

It was a little buggy, and I wondered about the Triple E Mosquito virus.  Maybe it was deterring hikers in the area.  It was a very dangerous virus that was transmitted my mosquito bite, and there had already been deaths in MA and CT.  I was conscious of the mosquitoes, wearing both a long sleeve shirt and DEET on my legs, but really had not given it a lot of thought.  I’m sure there would be more hikers over the weekend. 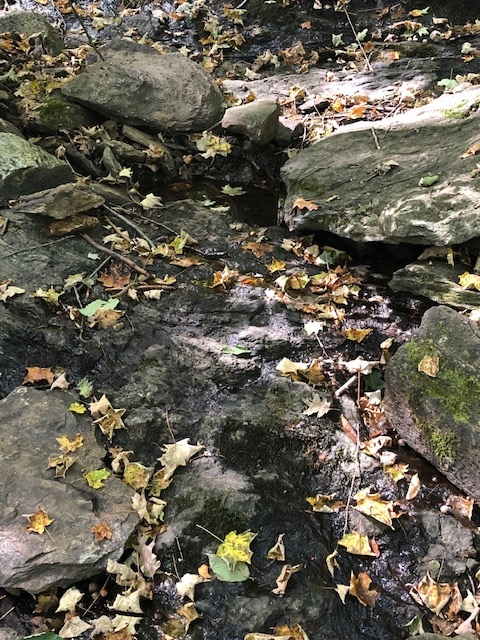 Pioneer Shelter was on my way back to the Appalachian Trail RR Stop, where I had parked my car, so I decided to pop in and check out the shelter.  It was mid-afternoon so there would probably not be any hikers.

The water source for the shelter was a small creek that you crossed over before reaching the shelter.  I was surprised at just how dry it was.  I walked up the creek about 20 feet and found a small pool of water, but that was about it.

There was a campsite on the other side of the creek – probably a good place to stay if tenting.  Tenting sites looked a little sparse around the shelter. 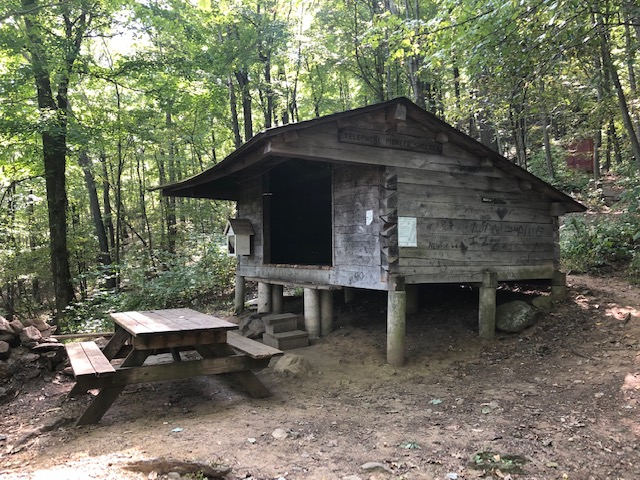 The shelter itself was in good shape, and looked to hold about six people comfortably.  It was swept out, clean, and maintained well.  The caretakers for this section of trail did a nice job taking care of it.  I checked things out for a few minutes, and then headed out.

End of the Day 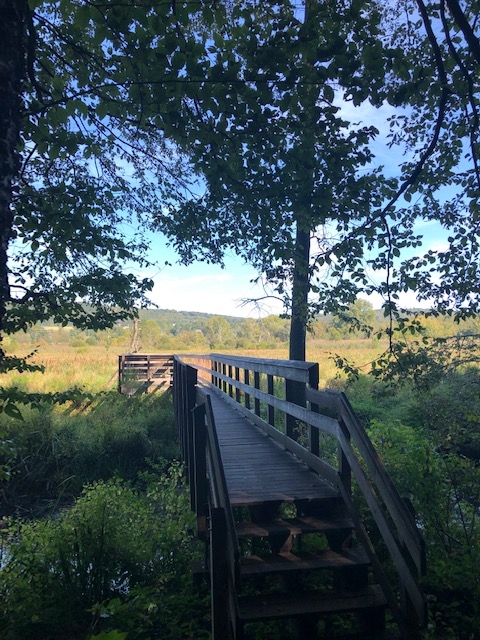 I paused on the bridge, as I prepared to finish the hike.and looked out over the marsh and hills (mountains).  This section of trail between New York and Connecticut really was one of my favorites, and the weather had been close to perfect.

The hiking is pretty moderate, with some mild climbing, and the terrain itself is quite varied.  When I recommend hikes in this area, this one of the ones I recommend.  For people not that familiar with the AT, it offers views, lakes, and a classic AT shelter that is always neat for families to see.