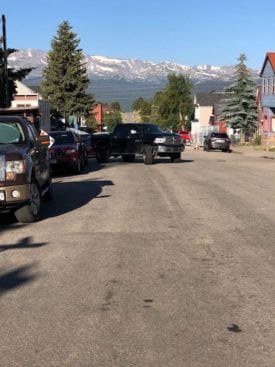 I don’t like conflict as a rule.  Raised in the south, by an educator turned politician, I was generally taught how to avoid confrontation, while still attempting to get my way.  Often referred to as manipulation, I always heard it called “gentle persuasion.”  It is an art that I’ve always limped my way though, but my grandmother was a Master.

As the voices ebbed and flowed – mostly flowed – just outside my door, I tossed and turned.  Fights would erupt, followed by profanity from one of the other “motel” customers, and the voices would cease for a little bit.  Whispers would start, the voices would escalate – the same cycle over and over.

I had noticed that half the rooms appeared to have semi-permanent residents, whose habitats had spread to small tables and chairs placed outside their doors.  The furniture was littered with beer cans and cigarette butts, so I was not really surprised by the late night gatherings.

Around 1AM, I was again jarred awake by the escalating voices of several women just outside my door.  In unison, both myself, and two of my neighbors, yanked open our doors, and via different versions, asked them to shut the $%&* up!  Well, mine was actually “Will, you please be quiet!”

The stared at us, muttered something unintelligible, and slunk back into their room.

Chores still needed to be finished, so I grabbed my empty pack and headed to breakfast @ the Golden Burro.  The restaurant had a western theme, and as I walked into the rather dimly lit, empty room, I wondered about the lack of patrons.  This was the opposite of the Brown Mule in Fairway, that was packed, with a waiting list for a table.

Breakfast was just ok.  Service was slow, so I switched from coffee to a soda.  I probably should have taken a seat at the bar.  The waitresses were super nice though.  Once they found out I was hiking on the trail, they actually gathered around the table to ask questions and give advice.  They all loved to hike!  I had never experienced such local group interest in any other hike.  It was pretty cool.

The local outfitter was open, so I headed there to get some packing materials to send a few things home.  I was also excited to see they had light weight Darn Tough socks, so I grabbed a pair of those to replace the ones I had lost to some thieving critter.

The PO was next, and while I waited in line, my back began to hurt.  Bending over, I pretended to tie my shoes, hoping the pain would lessen.  My chest and side began to hurt also, so I went outside and sat on a bench to wait.  Once the pain subsided, so I went back in to get my box, and send home a few things.  I was going as light as possible, hoping a reduction in weight would help with the pains in my back, and now chest.

Heading back to my room, I began thinking about the next section.  It was going to be about 5 days out.  Maybe I should see if there was a clinic and get a quick check of my chest, blood pressure, etc.  I never went to the Doctor, and usually had to get pushed to even get an annual physical, but I was not a young whipper snapper anymore, so maybe better safe than sorry.

The clinic was about a half mile down the road, so I called, got an appointment, and headed out.  In summary, they were fast, efficient, and recommended I either go home, or hang around for 1-2 weeks and get some tests done a few towns over.

I was still having pain when not exercising, and my blood pressure was really high.  There were also some other odd test results, but I was not going home.  I was sure this was just altitude, and my body was probably just handling it a little differently, not that I was older.  I had no shortness of breath, and nothing else wrong.  This was frustrating.

I decided to sleep on it.

The next morning, I called home to discuss the results.  I also spoke to some of the Docs in the family.  There were some tests that had been suggested, and I was told I should not hike again without having them done first, so I decided to get them in Colorado, and called to make appointments.  The earliest they could schedule my tests was nine days out.  Insurance had to approve it – I had to get in the system – yada, yada, yada.  Forget it – I would just go see my Doctor.

A shuttle to Frisco, car rented, drive to Denver airport, and I was back in CT.  It always amazes me that I can drive in three hours what took almost two weeks to hike.

So, I’m home now.  My heart is fine.  My BP is back to normal.  I feel good, but still have the pain, and am having a few more tests done.  I’m continuing to get in better shape, and strengthening my back and core.  I’m hoping the pain is attributed to maybe straining or spraining something.

I was pretty disappointed about ending the hike, but I’m a look forward kind of person, and have another short hike planned for the fall, and a longer one in the spring.  I hope to head back out to Colorado in August, and either hike the whole trail again, or finish up where I left off.  It will really depend on timing.

In between, I’ll continue tromping around New England.