I woke up cocooned in my sleeping bag, only my nose poking out.   Leadville was just around the corner.  It had been a cold night – probably in the mid-40’s, but my body had registered the low 30’s.  I always carried a bag that was about 10-15 degrees warmer than the expected temperatures.  In this case it was my 10 degrees Feathered Friend sleeping bag.

I wrinkled up my nose as I quickly changed clothes as fast as I could.  Stiff, damp and stinky – this process always slowed me down in the mornings.  I HATED putting back on my hiking clothes.

Down the hill, and through the pines, I could see the hiker I had talked to the night before, moving around outside of his tent.  He had said he was going to take a zero on trail, and go into town Thursday.  I guess he had changed his mind, as he appeared to be packing up camp.

Today’s hike was going to be short.  I only had about 5 miles to the highway, and then hopefully a quick hitch into town.

Less than a half mile into town, I stopped to sit down.  My back was bothering me.  The only thing that stopped the pain was when I sat and took off my pack.  It was very frustrating.

I’ve not mentioned my back in my other posts, but about three days into the hike I developed a “pinch” in my upper back, under my left shoulder blade.  At first it was just annoying, and I ignored it.  I assumed it was part of the early hiking pains, and would go away.

As the days progressed, the irritating pain would come and go, and when it did decide to show up, it hurt a little more each time, and lasted a little longer.  It was also completely random – high elevations, low elevations, uphill, downhill – it would last until I stopped, and then go away for a while.

I constantly stopped to adjust my pack, and convinced myself it was just elevation.  As long as the pain did not increase, I could ignore it.  A couple of days earlier, the pain had increased, spreading across the upper left side of my back, and into my side and chest.  Mostly it just ached, but at times it really hurt.

The last five miles into Leadville were tough, but the hiking was easy.  Over the highway, past some old train tracks, through a beautiful meadow, and past the old Leadville cookers.  Those miles included about 10 stops as I sat to remove my pack and rest until the pain dulled. 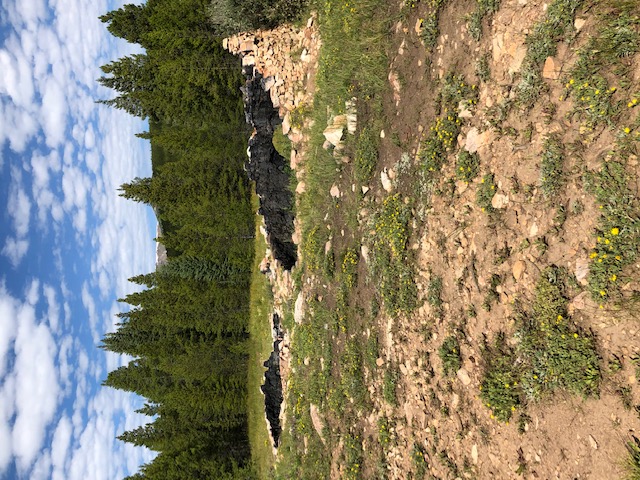 I arrived at the trail head, and stopped to pack for the hitch – strapped on poles, cash and cards in my pocket, water dumped out.

Cars and trucks were coming out of a fairly sharp curve approaching Tennessee Pass.  I moved across the road so drivers could see me before they swept on by, and waited, and waited.   Trucks and SUV’s, with their mountain bikes, boats, outdoor equipment, etc., zipped past me.  Some drivers stared at me out their windows, but most looked deliberately in the opposite direction.  Colorado is still the hardest state I’ve hitched in so far, while it’s neighbors to the north and south (NM & WY) are two of the easiest.

A jeep dropped off another hiker at the trailhead across the road, and he came over to chat.  At this point, I had taken off my pack and was squatting down next to it.   Standing to talk to him, I immediately bent over, before slowly dropping back down to sit on my pack.  I apologized and told him my back was bothering me a little.

The hiker’s name was “V.”  We chatted trail for a few minutes, and he told me he knew me from hiking with my brother.  He said Jordan was a quick hiker, and probably about a day and a half ahead of me.

While we chatted, an SUV dropped off a couple more hikers, one I had seen the day before.  The woman driving offered me a ride back down, and took me to the motel where I would be staying.  She also ran one of the hostels in Leadville.

As we drove into town, I told the hostel owner the name of the motel.  She could not remember where the motel was located, and plugged it into her GPS.  I raised an eyebrow since the town was fairly small.  Once we pulled up in front, I saw her eyes widen.  She immediately tried to figure out how she could squeeze me into her full hostel.

She felt badly she had no room, but I had stayed in worse, and told her not to worry.  This was the weekend of the Leadville 100, so either nobody had room, or they charged as much as the Four Seasons in NYC.  A few minutes later I realized I had probably not stayed in worse, but I had what I needed.  The bathroom was clean, water was hot, and there were no bed bugs.  Oh, and the bed was surprisingly comfortable.

Settling in for the Night

Within minutes, my pack contents were scattered all over the room.  I grabbed my clothes to wash, and then washed me and my gear, so the gear would have plenty of time to dry.

Once my clothes were dry, I headed up to Tennessee Pass Cafe for a late lunch – a very good late lunch.  The place was packed with runners and runner support people.  I was not in the best shape I’ve been in, but these people made me look like a total blob, and man they could EAT.  I sat up at the bar, and the guy next to me ate an entire plate of nachos that had to have been for about 4 people, BEFORE starting on his GINORMOUS burger.

I headed back to the motel, and rather than running errands, I settled in for the night.  My back was no longer bothering me, but I decided to rest.  I stretched out my sleeping bag, and laid back to read a little, while the neighbors fought in the room next to me.  It was probably going to be a long night.