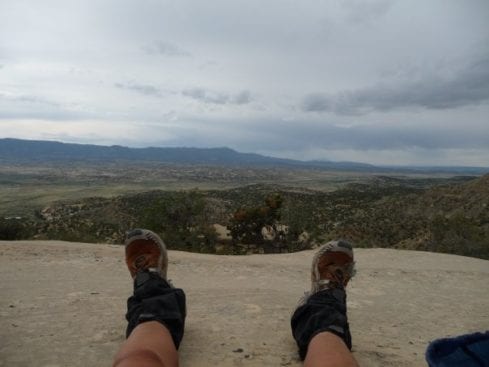 A Grey Wolf sighting just before the badlands was my day’s highlight.

Los Indios Spring was another high point. At this point, I left the dirt Forest Service roads and stepped onto nice, new trail. My road-battered feet would finally have some relief.

According to trail signage, the section of well-maintained trail that started near Los Indios Spring was kept by the “New Mexico Back-country Horsemen.” It appeared that out west; more groups adopted sections of the trail rather than individual maintainers.

Although the trail was a bit circuitous compared to the dirt roads, I would gladly walk in circles all day long if it prevented road walking!

Being raised via southern guilt, I also felt I HAD to hike the new trail. Building a new trail required a lot of effort and time. The Horsemen had done an excellent job on their section, and I wanted to respect the efforts.

The views out over the badlands from the Mesa were breathtaking. Badlands may not be the proper term, since they were almost otherworldly, with their towering rock formations, carved valleys, and dry, barren lands. I am a science fiction and old westerns fan, so Badlands it was.

It was right before the edge of the Mesa that I saw the wolf. This was not a coyote. I know what coyotes look like.

As I strode across the open Mesa, a quick movement in my peripheral vision drew my eyes to the right. I stopped to watch the animal loping just outside the treeline. Unfortunately, when I stopped, it also froze.

The wolf was a light grayish-white color. I turned to face it as it swung its head towards me, studying me just as I was him. The wolf was long and lean but not as tall as I expected. Although the animal was far away, I could see him tense as he crouched slightly.

Suddenly, he was gone. It was amazing to watch. The wolf seemed to melt into the trees. I stood there watching to see if it would come out further up the tree line, but it never did show itself again. I suspected he was watching from the shadows and maybe even continuing to track me down the Mesa.

It probably sounds a little corny, but you often know when you are being watched out here. I’ve always wondered how I know to look in a specific direction or turn to spot something behind me. I suspect it is more science than anything else, probably senses we don’t even realize are being used. Maybe smells brought to us by a slightly shifting breeze, subtle sounds picked up by our “animal brains.” Who knows, but it becomes more dominant the longer I’m out here and away from other “distractions.”

The wolf was beautiful, and I felt a particular connection with the lone marauder. I felt very fortunate to have seen it. Unfortunately, ranchers I had met over the past couple of weeks in New Mexico seemed to hate the wolves. The deadly hunters killed their livestock; sadly, they also appeared to kill for sport. I understood the rancher’s perspectives, but I still wished there was a way to figure out how to coexist with the predator. It was a magnificent animal.

Camp for the night was at the bottom of the Mesa. I was down to half a liter of water and the next source was a few miles further. The storms had been rumbling and grumbling all day, though, and as they drew closer, I figured my luck was up, so I stopped and set up camp. I tried not to push the envelope with Mother Nature too often.