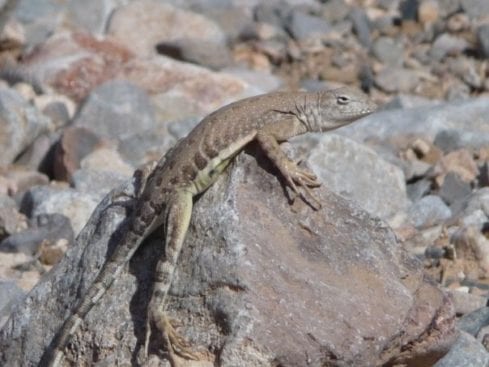 The day before reaching Cuba, New Mexico was fairly uneventful, with most time spent climbing in and out of steep ravines. The hiking reminded me a lot of the AT – up the ridge, down the ridge, and repeat. The only difference was the lack of switch backs on this trail. There was just a lot of climbing and a little scrambling.

Although the hiking was tough, the scenery made it worthwhile. Climbing in and out of the ravines and across the mesas, with their multiple hues of red, purple, orange, etc., provided jaw dropping moments for a gal from the densely forested mountains of the east. This was scenery and landscape I had never experienced. I loved the rugged, wildness of the land. The wide open mesas made everything appear so vast, and the longing I felt for the wandering trails back east was compounded out here.

Water sources continued to offer variety. As anticipated, I found the infamous “Toilet Tank Cover” spring, and about 10 feet from it was a cow carcass. I will admit that I did filter water from this fine source. There were a lot of floaties in the water (which did cause pause), but I ran it through my bandanna before filtering it. I did not want to completely clog up my filter with “stuff.”

The next source, which appeared to be used by man and beast, was an actual PUMP! I was thrilled, and drank two liters of lemonade since there was plenty of water. I probably would have camped near the pump, since I reached it late, but I climbed back up the next mesa and stopped to camp about an hour later. It is never the animals I don’t trust.

The day I reached Cuba was a mess of my own creation. Instead of just staying on one of the multiple routes available, I attempted a short cut. I allowed bad weather, and thoughts of nearby food, to cloud my judgement. This was not the first time, nor would it be the last. Food makes me weak.

A quick side note…

The Continental Divide Trail is unique in that it offers several route options, even more so when I hiked it in 2009. There was Wolf’s Guide, Ley’s Maps, TI maps, BLM maps, etc. In some cases, the guides even provided multiple “alternates.” You really could create your own route. Over the course of New Mexico I had become as comfortable hiking cross-country as I was on trail. Taking a quick cross-country jaunt to avoid lightning, and more quickly get to town food required very little thought.

Weather on the day I hiked into Cuba was crap. It had rained all night, and continued to shower on and off all day. Shower is probably not the right word to use. There was a continuous light, misty sprinkle broken up by torrential dumps of water. The desire to get into town was strong, although if honest, mostly for “town” food.

This type of weather also made for what I had begun to call “Mucked up Hiking.” The soil here, combined with cow manure, created a thick paste. Once the sun came out, and the thick paste slowly started to dry, it coated your shoes in huge clumps. These layers of muck became like concrete, and it felt like my shoes weighed 10 pounds.

Forget about not stepping in it. Sage/mesquite and muck were my only two options for foot placement – walk in concrete or wade through ticks. I had found that if I brushed against the brush too much the ticks leaped on to my legs. The ticks were even worse than those on the AT, if that was possible.

The rain and muck, coupled with the giant black cloud over the next mesa, brought me to a halt. I had this one last mesa to climb up and over before the final sprint into town.

One last mesa with a giant black cloud over it, spitting lightning.

Another option appeared on one of my maps. I had the Ley Maps and Trails Illustrated maps, and was also using BLM maps. My paranoia about getting lost was strong when I started the CDT, so I carried about 10 pounds of maps! The BLM map showed an old dirt road that cut around under the mesa, crossing a small piece of private property. This “road” was mentioned nowhere on any other guide or map. I ignored that, and decided to follow the route on the map I rarely used.

I started towards a “tank” (mud hole) I could see surrounded by cows – and there the road ended. Literally, it just stopped – although not on the map. I was not deterred, heading off through the tick brush. Looking down, pieces of old road appeared, or at least I told myself the slightly cleared patches were road. Tenacity is a strength/weakness of mine. Some might call it bull headedness. Once I make up my mind, common sense sometimes takes a back seat.

I floundered through the bushes for miles until I finally came to a gate with a giant “KEEP OUT” sign on it. Reinforcing the sign was a large rusted padlock. Although there was a twinge of guilt, again I was not deterred. I stood there staring at the gate, and as another down pour began I gritted my teeth and began climbing. I was not back tracking damnit.

The rain slowed a little as I reached the top of the gate and swung my leg over the top bar. I paused and looked out across the open fields, and caught my breath. There was the highway! The maps showed that once I reached the highway there was an 8 mile road walk into town. I may have mentioned that I love road walks.

There were a few faint cattle paths zigzagging across the fields, but mostly I just pushed my way through tickville, and other skin slashing bushes that ripped at my legs. My skin was on fire, and so slashed up that I tied both my bandanas to the front of my shins. This provided some relief, but not much.

My trail runners were also officially dead – literally shredded and being held together by dental floss. I would have to get duct tape in Cuba since my next pair were arriving in Chama, the town after Cuba. This additional ventilation meant I stopped every few minutes to empty the rocks, dirt and sand out of my shoes, and also check for ticks.

Finally, interspersed throughout the fields were ravines. These would not have been so bad if it were not raining. I would slide down the muddy embankments, scramble up the other side, check for ticks, empty my shoes, and check for more ticks.

Glancing up, I let out a deep sigh of relief as I realized I was getting close to the highway. Something was wrong though, and I slowed as the brush seemed to disappear ahead of me. Straining to see through the rain, I came to a stop. I had reached the edge of the final obstacle, and I let out a quiet “shit.” Between me and the highway fence was a wide concrete culvert with an equally wide river.

Getting wet was really not an issue at this point. The rain was now falling steadily and I was soaked. Fortunately, this was washing off most of the mud and keeping some of the ticks away. There is always a bright light. The concern was that the water was flowing fast from all the rain, and looked fairly deep.

Studying the water, I began unbuckling my waist belt and chest strap. I had bagged up my electronics earlier in the day since it was raining. Once I reached the bottom of the concrete embankment I stuck my hiking poles into the current. The water was fast, but nowhere close to the streams on the PCT, in the High Sierras. An advantage to this manmade river was no slick rocks on the bottom (bright spot again).

The water ended up only coming up to about mid-thigh, and I waded across fairly quickly, crab walking up the other embankment. Now I just had to get over the loose wire fence on the other side, and I would be on the shoulder of the highway. This was the humiliating portion of the day’s hike.

It was one of those fences that is tight enough to stay upright, and possibly stop a small mammal, but too lose to climb. Having a little burst of adrenaline, I mistakenly climbed it with my pack instead of throwing the pack over the fence.

I was about half way up when the fence surged outward. My limbs were splayed out across the wire as I frantically clung to the heaving snake. I swear I heard brakes squealing as motorists slowed to watch. As the fence slowed it’s bucking, I reached up and grabbed the top, the fence surging in the opposite direction. At this point, I heaved myself over the top, and with zero leverage I let go and splattered to the rocks and asphalt on the other side.

I just laid in the rain for a minute, catching my breath. Not a car slowed. I don’t blame them. The idiot that fell off the fence was clearly odd, climbing fences in the rain with a giant pack on.

The trail gods were frowning down on me for crossing private property (as they should have been), as I slogged eight miles into town. I did stick my thumb out, but not getting a ride was no surprise. It was pouring, and I was trying to hitch on a highway. I would not have picked me up either.

Thankfully, the Del Prado motel was on the end of town I entered. Although the motel had seen better days, it would end up being one of my favorite town stops.