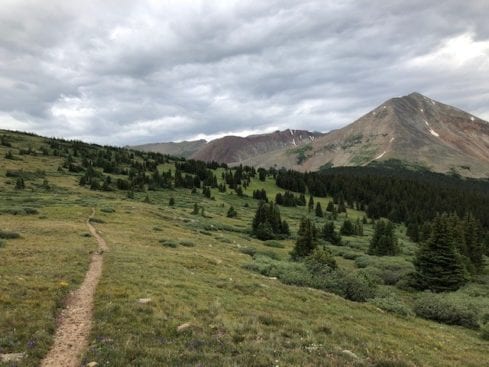 I stopped just short of Georgia Pass last night, and mother nature gave me a little bit of everything – hail, lightning, wind, and LOTS of rain.  The tent was a little crooked, in my on-going quest to always sleep on a flat spot, but I stayed dry – what really counts.  I was up and hiking by about 6:30AM.  Not having Jordan with me has resulted in later starts, since I don’t have to get a head start to keep up.  I miss hiking with him, and would probably have preferred just getting up early.   He was the perfect hiking partner for my solo personality.  I saw him on breaks, and when we camped at night.  Otherwise, I was pretty much free to roam during the day.

There were still a lot of ominous looking clouds as I headed over Georgia Pass, with rain spitting on me, so I kept up a good pace and scooted over the pass quickly.   Just before I passed over, I looked down into what I fondly refer to as a “holler” down south, and saw a trailer and truck tucked into the trees.  What a great way to spend the summer, or even a weekend.  It really was beautiful up here, close to treeline. 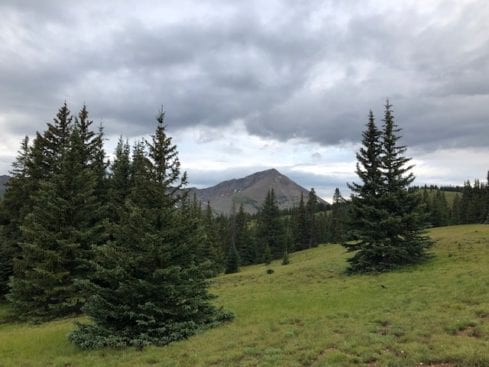 I dropped back below treeline after the pass, and paused to situate my pack.  For some odd reason my back was sore, and had been bothering me for a day or two.  The clopping of small hooves made me look up to see a young mule deer on the slopes just below me.  I tried to quietly take out my camera, but he heard, looked up, and bolted into the trees.  The mule deer seemed more skittish than the white tails I was accustomed to back home. 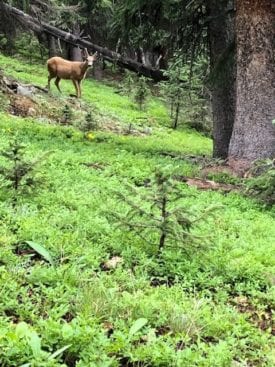 Rain fell all day.  It wasn’t too hard, but it was constant.  On the steeper parts of the trail, the mud was slick, and I took a couple of good falls.  In both falls, my feet slid out from under me.  I landed on my back, or rather my pack, the first time.  The second fall was a little tougher, as  I tried to stop myself from sliding, catching my leg up under me.  This resulted in a good little patch of “trail rash” running up my shin.  My leg was muddy and bloody, but the rain washed this away in no time.

Company for the Night

Around lunch, I stopped to take a break, and looked down the trail to see a young man climbing towards me.  I was propped on a slanted log – a blow down next to the trail that had been cut in half when clearing.  If these are slanted just right, I can lean back on my pack without hanging myself with my chest strap.  This log was perfect.  I sat there chewing on a bar, watching as he drew closer.

“Hi,” he said as glanced up.  He gave me a small smile, much more focused on the methodical pace he was using to climb, and looked back down after glancing up briefly.  “Steep climb,” I said as he slowed to a stop.  He nodded, as he shifted his weight.  We chatted for a few minutes.  He said he was hiking with his Dad, who was about a half hour behind him.  They had also camped near Georgia Pass.

His Dad passed me about 10 minutes later.  He was making better time than his son thought he was.  He had earphones in, and nodded a hello as he plodded by at his “climbing” pace, which was much the same has my “climbing” pace at this point.

We played leap frog for the rest of the day.   A couple of times I sat and chatted with them for a few minutes.  They were headed to Six Mile Gulch, which would put us all at about 17-18 miles.  I wanted to go a little further, since I expected us to be there by late afternoon.

The sun came out around the time we reached the Gulch, and everything I had was wet, so I changed my mind.  I ended up camping near the guys, and chatting with them for a bit.  They were both super nice, and out for a section hike, headed into Frisco the next day.  I always enjoy seeing families backpacking together.  I think it is a great way for families to bond.  Not only do they spend time together, but there are always extremes involved.  Much of the experiences are often new, and there are often some “hardships,” which make the highs even higher, and the lows even lower.  These types of situations create memories that are not forgotten.

I backpacked on the Appalachian Trail a few years ago with my father.  We had never done any camping or backpacking together.  It is probably one of the experiences with him that I will remember the most.  I remember it rained and was cold most of the time, I accidentally pushed him down a mountain, and he still tells everyone I tried to kill him.  I’ll always remember setting up his tent, making dinner, and taking him his small pot of food, as he laid in the tent trying to recover from the day’s hike. 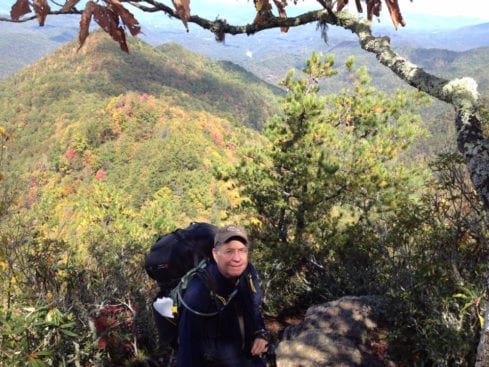