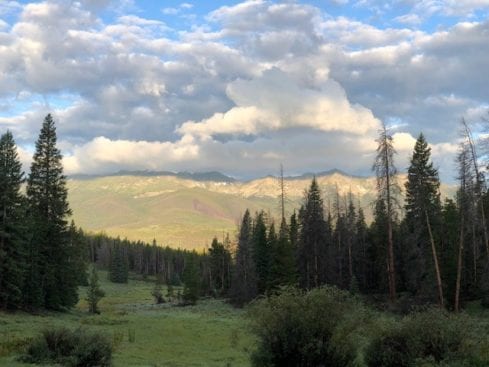 Camp was silent as I headed out this morning.  Someone else had come in during the night, and there was a bright green tent set up about 10 yards away.  I had not been out here long enough to recognize hiker’s tents yet, and was just glad there had been no snoring since I had forgotten my earplugs.  The forest was waking up as I moved down easy tread towards the highway.  I would be passing the road into Breckenridge and Frisco today, and could see the high peaks across the valley.

Mule deer grazed at the edges of meadows, close to the refuge of the forest.  They would hop into the treeline as I approached, and then stop to peek out from around the tall tree trunks.  What had driven their evolution to make them so different from the deer I had grown up with in the south?  The hopping, giant ears and inability to hide very well, suggested they were maybe a little “slow.”   🙂 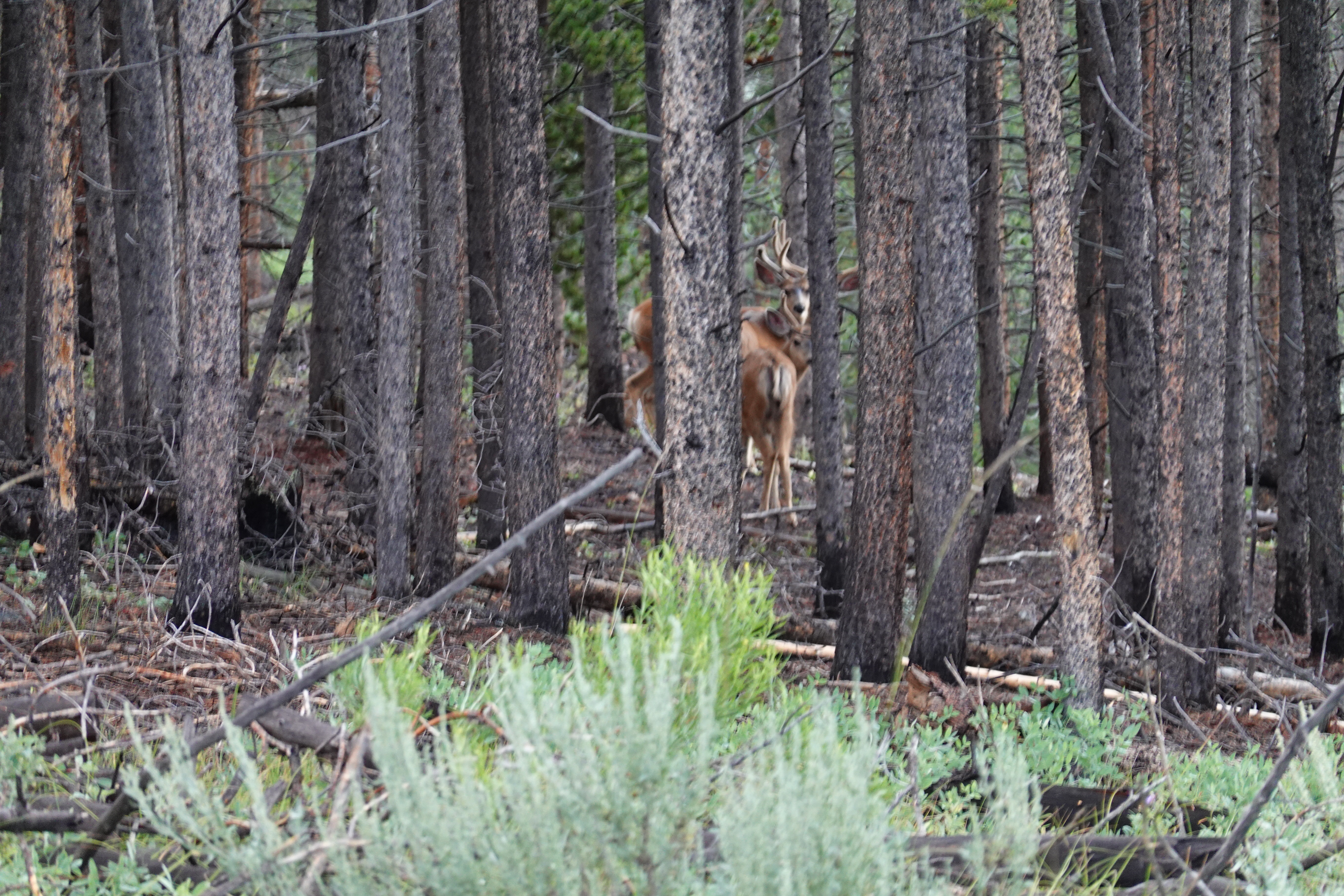 I had gone over my maps and guide last night.  Today’s hiking would involve a good bit of elevation gain before heading back down to Copper Mountain Resort, so I set a steady pace climbing up from the highway.  In short order, I was passed by every other hiker coming out of Breckenridge and Frisco, a popular resupply option.  Jordan had resupplied in Breckenridge, but was at least a day ahead of me.  Slow and Steady… 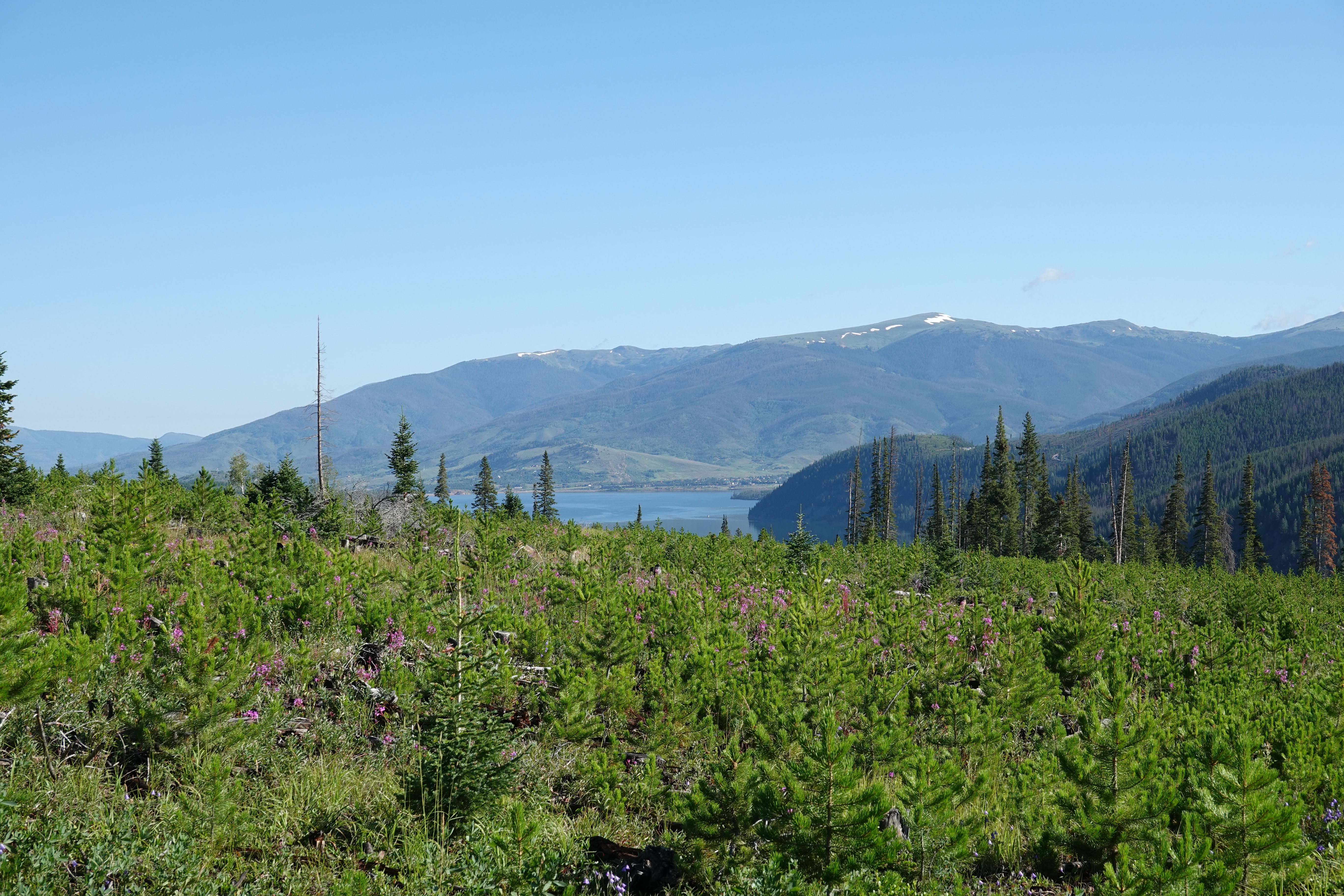 Climbing was constant as I headed up towards 5th and 6th peaks.  I would climb around 3,500 feet before reaching the highest point – 2,500 feet to the first peak, and then another 1,000 feet between the peaks.

“Crap.”  I reached out to grab a rock as I pulled myself up the trail.  This was the first time, I’d had to use anything but my feet.  I studied the mountain in front of me, searching for the switchbacks that would bring me closer to the pass.

“Excuse me,” I heard around a soft cough behind me.

I jumped, and quickly shifted over to my right, looking back behind me.

A man, that probably had about 10-15 years on me, was fluidly walking up the mountain as if out for a stroll in the park.  Immediately behind him was his wife, of about the same age.  They both carried good size day packs, and ambled up the vertical trail with as little strain as anyone I had seen yet.   Rocks and roots that I had used to monkey up on all fours, they glided over and flowed around like water.

I grimaced as I watched them pass.

“You make it look so easy,” I whispered to myself.

“Oh, it’s not easy,” said the woman, as she smiled down at me gently.  She was not even breathing hard, and clearly had better hearing than me.

I reached the beginning of the switch backs, to find the couple sitting down and eating a snack.  They both smiled, and we chatted for a few minutes, before I plodded off at my deliberate pace.  A few minutes later they ambled past me again, allowing me to gauge where I was on the switch backs, the rest of the way up.  It is nice to have markers. 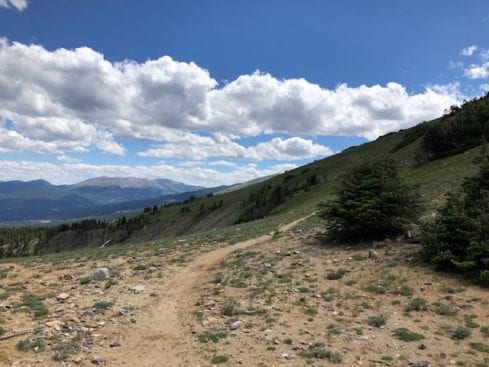 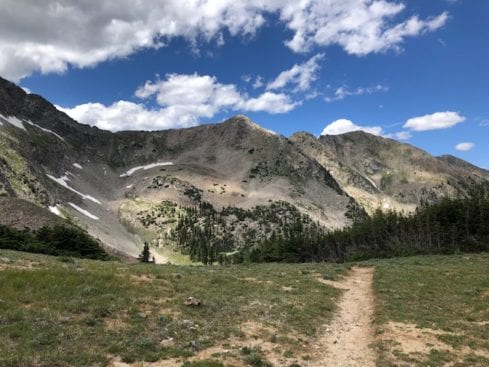 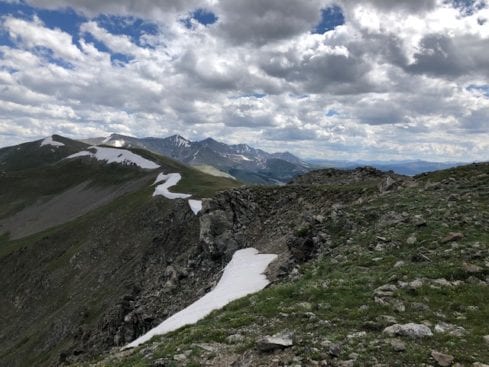 The hike over the last peak was not nearly as tough as the climb to 5th peak, and I was inwardly pleased to note that the mountain goats had not arrived far ahead of me, as they were just finishing their fruit cups.  We chatted again for a few minutes before I began the trek down.

Climbing down to Copper was a long hike, and my feet grew tired from the constant pounding, but it was not as steep as the climb up had been.  A lot of long distance hikers much prefer the ups, as do I, but the downhills don’t usually bother me too much.  My body seems to have adjusted for the pounding.

When I first started backpacking, I thought I had fluid on my knees.  This was not uncommon for me playing sports, and usually occurred when I fell or twisted my knee.  I waited for the pain, and it never came.  The swelling under my knees did not go away until the hike was over – like little cushions under my knees.  It usually goes away about a week after the hikes are over.  I hobble around on club feet for a while, but my knees have never bothered me much. 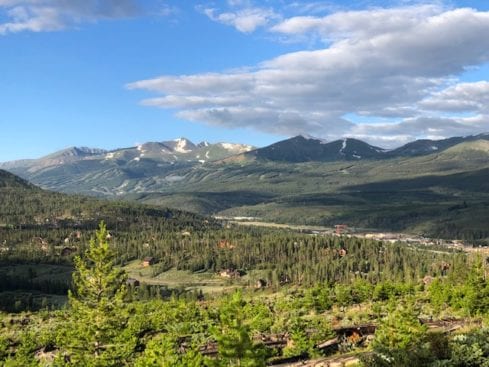 I stopped and stared at the detour sign, vaguely remembering something about it from a guide.  It was late, and I had no desire to stop and pull out my maps and guides, so I turned and followed the arrows that pointed down the road.  The road was deserted.  If needed, I would head up into the woods to camp.

The road ended at a stop light.  I looked across the street at a convenience store to my right.  Signs indicated the trail went across the busy intersection to my left, and into Copper village.  Maybe there was a restaurant.  I headed left and followed the small signs that periodically appeared on posts and barriers.

I finally stopped a biker, who also happened to have gone to school in Charleston, SC, and he told me the village was shut down and there was nothing.  I thanked him for the info., and turned to see two other hikers approaching.  One was a girl I had met earlier.  Her name was Michele, and this was her first time doing any long distance backpacking.  We started following the signs and discussing our options for camping.

As we approached what looked like a retail area, I stopped another person who told me there was a Burger Joint ahead (Ten Mile).  Well, that was all I needed to hear.  Michele said she wanted to go ahead and find the trail, and  I waved my hand and picked up my speed, glancing back to see her following.

The hostess did not blink as we walked in with our packs and smelly selves.  The only indication of our hiking status was being seated at the back.  I had absolutely no problem with that.  The burgers were fantastic, but pretty much anything other than Ramen and tuna would have been fantastic.  They really were good though – huge and cooked perfectly.  I could not finish all my fries, and slipped them into a Ziploc.  It was growing dark and time to leave.

We waddled out the restaurant, and then waddled around trying to find where the trail picked up.  People tried to direct us, and we had about three false starts before slinking across the fenced off construction area, and straight up the ski slope, to intersect the trail.  Sometimes rules fade a little as hikes lengthen.

The couple I had met earlier in the day had hiked through Copper, and told me about a tent site up on a knob, just past the resort.  It was hidden up in the trees, and I would have to climb up to find it, and tolerate interstate noise all night.   Michele came with me, and we found the site, my tent on one side of the clearing, and her tarp on the other.  The interstate noise – well it was like a lullaby.  I had grown up sleeping across from train tracks.

I had the best night’s sleep yet on the trail.