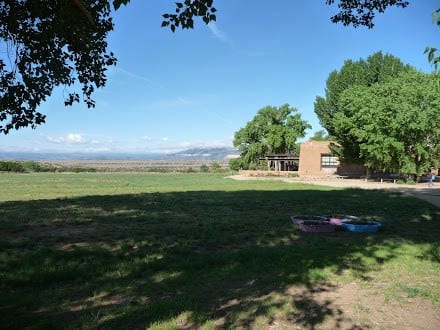 Hiker reunions, like the ones at Ghost Ranch, are one of the nice things about towns, or any place hikers gather – the chance to catch up. The stay at Ghost Ranch was a chance to relax, and hang out with Mr. K, Cape Cod Mike, The Monkeys, Aaron, Laura, etc.

It’s always interesting that I don’t see a hiker for days, come into town, and BAM, there they are. Some of these hikers I’ve only met once, and when we meet again it’s as if a long lost friend has materialized, only to fade away again a few hours later – often never to be seen again. There have even been instances where I’ve made a best friend for a day, and not seen them a second time until I was on another trail.

The climb up and out of Ghost Ranch the next day was tough. I caught up with Mr. K, and we headed down a box canyon until dead ending at a wall of large boulders. We turned around an went back to where the canyon had split, and realized the wall had been the correct route. Mr. K went ahead while I talked to a day hiker headed in a different direction.

Finally reaching the wall of boulders, I threw my hiking poles up and began climbing, and climbing. At the top of the wall of rock, I reached the canyon wall and saw what appeared to be a faint trail winding it’s way up through the brush. I reached out and hauled me and my 40 pound pack up hand over hand, moving fast and praying the small trees and bushes would hold me. Gasping and sweating, I finally reached the top of the ridge. I learned later that other hikers had taken an actual trail out of the Ranch. Damn maps.

Once up on the ridge I found Mr K. taking a break, and moved on past him, dropping back into another narrow canyon. At this point I headed off trail for a bathroom break, and I think he passed by at some point. There was no trail to speak of, so I checked my maps and headed northeast, climbing up the next ridge. Mr. K appeared to have taken a different route, and I never saw him again that day.

Being “lost” was not unusual for me in New Mexico. At some point, maybe in Cuba, I received my GPS from home. I was not uncomfortable with maps and compass, but the manual route finding just slowed me down so much.

Even with the GPS I found myself “wandering” cross-country at times. Trails on the maps did not exist, or were so old that they had about faded away. In some cases I just followed rock cairns or old notched blazes on the trees. New Mexico was by far the most challenging state when it came to route finding, but I enjoyed the “game.”

I bush whacked my way cross-country, and up the next ridge, towards what was supposed to be a Forest Service Road. Just as I reached the top of the ridge another damn lightning storm hit, so I climbed up under a bush to avoid the hail. It had been raining off and on all day, and this weather was supposed to continue all week.

The hail and rain finally slowed, and I heard what sounded like a cow in distress. I headed off through the woods in search of the poor animal. As the woods began to thin out, I skidded to a stop! A MASSIVE red bull was facing me, pawing at the ground. He did not look happy, and was pretty amped up. Detour…

Taking a wide circle around the angry bull, I finally came to a dirt road. It may or may not have been the road I was targeting – but it was definitely better than pushing through thick under growth! Stepping out of the woods, I spotted another wicked looking tan bull – also quite MASSIVE – just a huge mound of muscle! Were they about to attack each other?

This giant brute was tearing at the ground and rubbing his head in the mud, just before he whirled to face me! Like an idiot I began yelling “bad bull” and waving my hiking poles in the air – my only defense available right then, other than my pocket knife. At this point he appeared to decide I was unworthy of his attention, and turned back to show off for some cows I noticed up ahead.

About the time I started backing away from the Tan mountain, a MASSIVE black bull charged across the road in front of me. What the hell?! At this point I’d had enough and began jogging towards the woods. Jogging was my top speed with a full pack. Hopefully bulls were not reactive. It then dawned on me that my pack rain cover was bright red, and I jogged a little faster.

I walked quickly through the edge of the trees, and a few minutes later I rounded a curve to see cows running out of large cattle trailers. No wonder the bulls were going crazy. Their girlfriends had come for a visit!

“Watch out for the bulls,” said one of the ranchers that was leaning up against the back of his truck. “Yeah,” I said, with a grimace on my face. “I found your boys a ways back.” He grinned, and we stood chatting for a few minutes before I took off. I was hoping to make a few miles before the storms cranked up again and turned the road back into sloppy concrete.

It was late afternoon when I strode over a slight rise, still in the midst of my 9 mile dirt road walk (favorite), and spotted two very skinny legs spread out on the side of the road. Next to the legs was one of the largest backpacks I had ever seen. I walked up to see a young man sprawled out on his back, taking a break. Sam was in his mid-twenties, small and wiry, with a thick mop of dark brown hair. I was the first hiker he had seen since Grants, NM.

Sam and I ended up hiking together for the rest of the afternoon, until we made camp in a grove of pine trees near a cold, surging spring. These types of springs were not common, so I was excited. I dumped out the remainder of my water from Ghost Ranch. I always dumped out my town water at the first good spring out of town. It was amazing how much better most springs and creeks tasted.

It had been raining non-stop for about 4 hours, and the temperatures had dropped into the low 40’s. I was pretty cold by the time we stopped, and glad to set my tarptent up on a bed of pine needles. The needles would provide good drainage, on high ground, during the steady rain. It was good to crawl into my bag and get warm, before quickly falling soundly asleep.