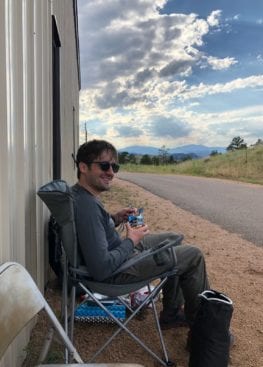 The South Platte River was our goal for the morning. This large, rugged river was the opposite of the scorched, hot burn we would experience over the second half of the day.

We all chatted as we dried gear, got our last water for the next ten miles, and generally discussed the upcoming section, and where we were headed for the day – a varied group of people bound by this hike.

The next 10 mile section was a fairly recent burn that would take years to recover. There was no water, and there would be very little shade, so I grabbed about 2-3 liters of water and started the climb up from the river, leaving Jordan snacking.

Within an hour I was drenched from the climbing and fierce, shadeless heat. I would summit a rise to see stands of charred trees, spotted with a few living spots of green, but the trail always seemed to turn away from the promised shade.

Finally, I came to the top of a small hill with exactly three live trees, and collapsed in the meager shade to have a PB&J tortilla. Jordan joined me a little later, found his own tree shade, and we chatted while we ate lunch.

The last three miles of the burn area were so hot. I followed Jordan with my head down, working to maintain my pace as I stared at the dry, rocky trail in front of me. Heat, sore feet, and focus – these overrode any other thoughts.

The volunteer fire house at the end of the burn offered water for hikers, via a spigot on the corner of the building. I circled the building and found a shady oasis with water and chairs to collapse into – heaven.

It was around 5PM so we broke out our ramen and potatoes to feast. We would use our dinner calories to hike for another couple of hours before camping.

We discussed our goal for the night, and decided on Little Scraggy. It was about two miles away, so we figured we would reach it and see how we felt.

The trail crossed a private road that led to a ranch, and then crossed the highway. There was also a very clear trail across the private road, and I led us this way without paying attention. The trail began to fade about a mile into the brush, and we stopped so Jordan could check his maps. He suggested we cut cross country to the highway, but I saw a dirt road in the distance. He checked his maps again and said the road should bring us across the highway from Little Scraggy.

Jordan was dead on, and we came out on the road about 100 yards from the entrance to the day use campground. We were excited to find a pit toilet, which made up for the lost hour. We stopped briefly, and then hiked about another mile before stopping at an overlook to camp for the night.