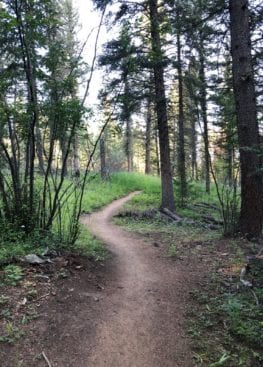 We have consistently pushed close to 20 miles a day over the last two days. Mileage has been high, and the days have been long, so I’ve been able to make the mileage this soon in the hike. Thank goodness the rabbit takes long breaks, or the turtle would never keep up!

I was up and moving by 6AM this morning. The rabbit was just starting to rustle, but I knew he would probably catch me by lunch – hopefully at the end of my lunch, so I could scurry off while he ate!

The morning was quiet, and downhill, so I almost passed Cameron without seeing him. He called out, and I turned in surprise to see him waving up from his camp at the creek below. We chatted for a few minutes, and I moved on. That hiking god would be passing me shortly. Sure enough, I was taking rock formation pictures about 20 minutes later as he flashed by smiling.

As he passed, I looked at his shoe, and it dawned on me! “Cameron! What size shoe do you wear?” He looked back grinning. “A fifteen.” I was speechless for a second, but now I had a connection with that GIANT footstep I had been following for the last two days. For the next day or two, I would yell “15!” every time I saw one.

A wet, late spring had resulted in vivid wild flowers, and I was constantly stopping to take pictures with my iPhone, and my real camera. I had discovered portrait mode on the iPhone, and really liked it for the flowers.

I have a really good little Sony I’m carrying, but I’m still trying to figure out all the settings, so I take every shot twice. It will be interesting to compare the photos once I’m home. Meanwhile, it is more weight for what already seems like a heavy pack.

The rest of the day was pretty uneventful. Jordan caught up with me around mile 18, and wanted to push a couple more miles to the McCurdy junction.

The final downhill was all downhill, and we flew through the rain. I led, but ground to a halt at the site of a large bonfire in what appeared to be a very established site. We stood debating in the rain before crossing the creek on a tilted bridge, and heading off into the trees to find a couple of spots to set up.

It had been a long day. We set up quickly in the rain, as it turned dark. It is the best feeling to cuddle into a warm bag as the rain patters on the tent.