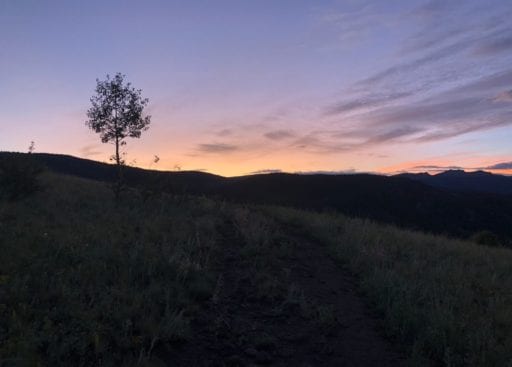 We slept through storms and rain all night. Jordan said he may have felt his hair rise. We were in the trees, but on top of a ridge, and rumbles and pops swirled around us all night.

Morning broke clear and crisp. A front had pushed through overnight, and left a clean, new day.

I was up early, and packing in the dark, so when I could not find my socks, I attributed it to the dark, and not remembering where I had put them last night. I tore apart everything, and looked all around the tent, finally assuming they would turn up in town.

I realized, once I found my second chewed handle, that my socks had gone the way of my handles. The creature had followed us, and would have a fine wool nest for the winter. I also felt like an idiot. How had I not learned my lesson from the previous night’s feast?!

I was going to miss Jordan. He was moving on to resupply at Breckenridge, so I knew that at his pace he would move ahead of me. I was going into Fairplay at Kenosha Pass, where I had shipped a resupply box. Still, I got to hike a week with my brother, sharing something we both appreciated and enjoyed.

Four miles was a quick hike to Kenosha Pass. I needed to resupply and clean up, so I could head out the next morning. There was always a lot to get done, and the resupplies were always more taxing than the hiking.

It took an hour to get a hitch to town. Colorado is easily the toughest state I’ve hitched in, and I’ve probably hitched in a third of the states in this country. When I do get a hitch in Colorado it is always from someone born and raised there.

A GIANT white pickup truck skidded to a stop next to me. “Are you going to Fairplay,” I asked, leaning in the window. The driver looked over at me and gave me a curt nod. He was a very large man with longish, light brown hair, topped by a backwards ball cap pulled down tight on his head. “Get in,” he said.

We flew down out of the mountains. He drove with one hand on the steering wheel while palming a small lighter, and used the other hand to talk – very loudly. I would have called it very loud yelling, but I suspect he would have thought it conversational.

I learned about the “unfairness of water rights, unnecessary permits to build on his own land,” and “how the current administration did not put up with all the administrative BS,” which was why he and his family had voted in the last election for the first time in years, and would all vote again. I listened to the anger and frustration, and tried to understand his perspective.

Settling in for the Chore Run

I learned more about what supported our current administrations base, in those 20 miles, than I had learned in listening to the media for the past two years. It was a pretty interesting conversation.

Jumping out the truck, I went into the gas station to get directions to the hotel. It was “only 10 minutes away,” I was told. Of course that was by car. I started the 30 minute road walk, arrived to find I could not check in until 3PM, and did what I always do. I sat down in the lobby, across from the front desk and said I would wait. It was only noon. As most always happens, they managed to find a room about thirty minutes later, and I smiled and thanked them profusely.

My pack was exploded in about five minutes, and the chores began – wash me, clothes, gear, PO, Grocery Store, real food, etc. I was worn out by evening and ready to get back to the trail where I could rest.

On a cool note, my Sawyer filter fell into the back of the truck when I threw my pack in back. The guy that had picked me up, drove around town, until he saw me walking, so he could give the filter back to me. He was not from Fairplay, and had driven 100 miles on business. It was a sizable town. He waited to find me before driving back home. Nice…