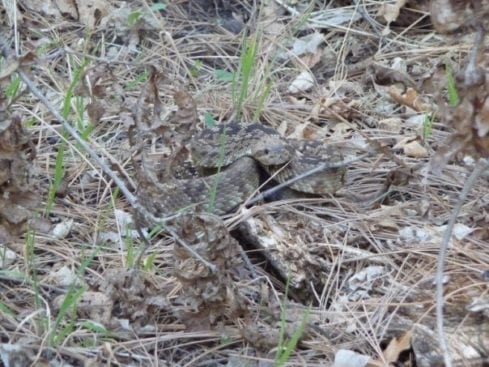 Today, I would be hiking on the Middle Gila River, and after the Lower Gila River, I wanted to get moving early.  I was wide awake, packed and ready to go by 6AM.  Sitting quietly on my bed, I listened for movement in the lodge around me, before heading downstairs to see if the others were up and about.  The host was in the kitchen, and let me know that breakfast would not be ready until 8AM.  I went back up to wait in my bedroom, under the covers.  The morning was freezing, and the bed was the warmest spot in the building.

Finally, breakfast was served, and the 3 small apple pancakes and one boiled egg let me know they did not host long distance hikers very often.  After I was finished, I asked if I could have some cereal, and grabbed a couple of apples from a bowl on the counter.  I was good to go.

The first section of today’s hike was a 4.5 mile road walk to the T J Corral trailhead, and I knocked it out fast.  Road walks always hurt my feet, so I tried to get through them fast.  The road was quiet, which was a little eerie considering how late it was in the morning.  I think maybe one car passed me the entire time I traveled alongside the old black top.  I had flashbacks to Chainsaw Massacre.  Even the terrain was similar.  Hiking alone can sometimes give your mind too much “free time.”

Today’s hike was taking me through Little Bear Canyon.  It was about four miles long, and I had heard that the end of it was a slot canyon.  It did not disappoint.  The canyon narrowed as it wove back and forth between the cliffs, with a small stream running down the middle of it.  It really was quite pretty.  I wish I had taken pictures.  One of the things I regret most about my earlier hikes was that I did not take more pictures.

I stopped for lunch around three hours into the hike, and the others caught up with me (Ron, Special J, and Gabriel).   They passed on by, and I caught up with some of them a little later as they stopped for breaks.  The break leap frogging went on for most of the day, until we arrived at Jordan Hot springs along the Middle Gila river.

The hot springs along the Gila are one of the high points.  The water is beautiful, and they are pretty well advertised, so fairly easy to find.  We arrived at the 92 degree Jordan hot spring, and everyone jumped in, where we all sat around laughing and chatting for about an hour and a half.  The water temperature was perfect, and the large, clear, pool, with it’s blue tinged waters, was tucked back under the shady branches of a stand of trees.  It was a beautiful setting.

Leaving the spring, we all agreed we would let Ron lead off as we headed to camp for the evening, and we spaced out and settled into a regular hiking rhythm.  We were heading up the trail next to the river, when I heard a high pitched scream ahead of me.  I came around a curve to find a shaken Ron heading back in my direction.

“A damn rattlesnake struck me!”

“Where?” I said, looking down at his long pants and boots.

“Well, it struck AT me,” he said.  He was a little flustered.

Special J came up behind us and asked what was wrong, just as Ron was explaining what had happened.  “Where is it?” both Special J and I said at the same time, as we whipped out our cameras.  Ron looked slightly offended that we were not more concerned with his well being, but moved slowly back down the trail until he came to a stop and stuck out his hiking pole.  We clearly heard the warning rattle.

Gabriel had also caught up, and we all crowded together looking at the snake in the pine straw beside the trail.  I took a quick step back when I saw just how close we were to the angrily rattling snake.  It was amazing how well he blended in to the faded brown pine straw.  I was not surprised that Ron had not seen him.

I watched the rattlesnake closely, and saw the quick movement of a stick angling towards him out of the corner of my eye.  All the guys now had sticks. and were terrorizing the poor snake, so I fussed a bit and told them to leave him alone before they all got deservedly bit.   They grumbled a little, but threw down their sticks, and we all swung well off the trail, and into the woods, to give the pissed off snake plenty of room.

Middle Gila – Camp for the Night

Around 6:30PM we finally came to a large grassy clearing next to the Middle Gila river, and decided to call it a day.  We all jostled around, trying to set up close to the water.  One of us snored quite loudly, and we hoped distance and rushing water would help drown out the cacophony.  I will name no snake charmer names.

Once everyone had set up their tarps and tents, we all moved to an old fire ring in the middle of the clearing.  It had not been used in some time, but whoever had used it in past had left several old logs, and everyone claimed a seat to sit down and make their dinners.

We talked and laughed, making fun of Ron’s “girly snake screams,” discussing what everyone was having for dinner, talking gear, and discussing tomorrow’s route.  I mostly hiked solo, but sometimes it was nice to hike with a group of other hikers.  The camaraderie was nice.