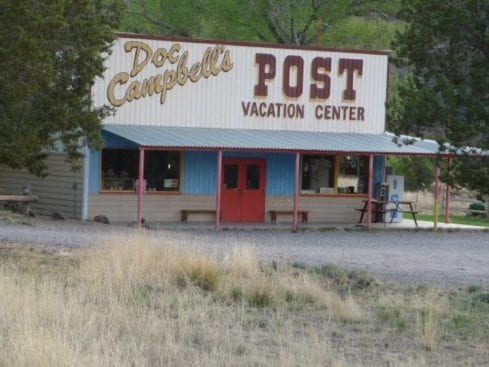 I was packed up and hiking by 6:15AM, having slept fitfully since there was not enough room to pitch my tarp tent, and I was worried about nightly visitors nibbling on me.  Sleep was broken by “phantom bites” that kept waking me up.  My dream mind was convinced there was a scorpion climbing into my bed with me.

I arrived at Doc Campbell’s around 7:30AM, and walked up to the front door, eager for something to eat that was not related to hiking food.  The sign on the door stated the business hours were 10AM-4PM.  I slumped down on a bench next to the front door, and settled in to wait.

“Hey!” I heard someone yell.

I looked up to see Ron coming across the road with a big grin on his face.  It was always nice to reconnect with other hikers, and I grinned back at him.

“What the hell?” I said, laughing.

Ron said he was staying in a trailer across the street with some other hikers, and to come on over and get some coffee, so I grabbed my pack and followed him over.  Anything was better than hanging out on that hard little bench for two and a half hours.

Special J and Gabriel had had arrived yesterday, and were staying in the trailer at the RV park also.  Mike had also stayed last night, but he had already left.  They told me they had all gotten lost looking for Trail 234, and had ended up doing a 35 mile road walk to get to Doc’s.  They had only heard of me and one other hiker actually hiking the Lower Gila section.  I completely understood the confusion.  Trail 234 was about 2/10’s of a mile past an old fallen cabin on 506, and looked like a faint abandoned ATV tread.  I had almost passed it.

While I was cleaning up and having some coffee, the RV host stopped by to see us.  He let me use his phone to call the Wilderness Lodge down the hill. I got a room, as did a couple of the guys, but we could not check in until 2PM, so we decided to go see the Gila Cliff Dwellings.  It was a National Park that I had been looking forward to seeing. 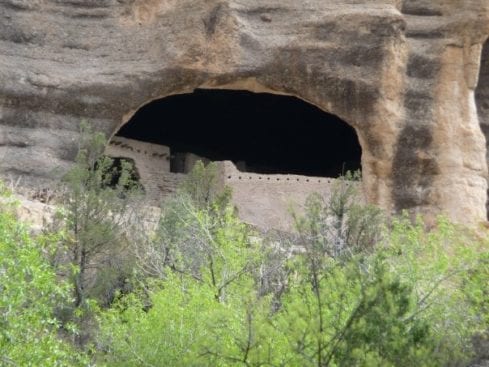 We all left our packs in the trailer of the campground host and headed out to the road to try and catch a ride.  The dwellings were only about four miles away from our campground, but walking more than 100 yards, when not actually hiking, was a BIG NO.

Hitching to the Cliff Dwellings

Being the only female in the group, I was of course the designated “ride haler,” and flagged down the first SUV that drove past us.   The SUV backed up, and two guys asked us what we were doing.  We explained we were going down to the dwellings, and they said they were also and to hop in the truck.  We all crammed into the back seat, and the passenger turned to look at us.

I tried to explain the concept of thru-hiking to him, and he sat there staring at me in silence for a moment.

“Sounds like hobos to me” he said again, and turned back around around as we pulled back onto the road.

They were nice guys, both from Texas, and we were the first hitch hikers they had ever picked up.  They had stopped when they saw me, but almost kept going when they saw the three guys sitting on the ground behind me.  Ultimately though, they had decided what the hell.

It really was the perfect ride.  They were going to the Dwellings, so we all went on the tour together, and then they gave us a ride back to Doc’s, wishing us well on our “journey.”  Although we continued to try and explain the concept of our hike to them, I think they were convinced we were Hobos.  As I explained the hike, I began to see the numerous similarities, and can’t say I blamed them.  I remember a guy pulling over outside of Sister’s on the PCT, as I was hitching, and handing me a bag of toiletries and five dollars.  He explained that he traveled around the US helping hobos and the homeless.  I tried to explain my hike then also.  I never did convince him either.

Wilderness Lodge for the Evening

Once they dropped us back off at Doc’s, I was able to get my resupply box, and lunch (2 frozen burritos, 1 can of beanie weenies, and 2 bottles of Pepsi).  All thoughts of nutrition go out the window when I’m hiking.   The general mercantile store was eclectic, with animal hides everywhere, but it had everything I needed, and the owner was friendly, so it was the perfect stop for me.

After I had packed up, to head out the following day, I headed back to the RV park to ask the owner if I could use the computer he had offered earlier.  I caught up on emails, and then walked down the road to the lodge.  The lodge was rustic and simple, but it was clean, and nice to relax for the rest of the afternoon.  I asked if I could wash clothes, and the owners (who lived out back), handed me a five gallon bucket and some dish detergent.  I scrubbed out the few articles of clothing I had, and then hung them out on the clothesline to dry.  A washing machine would have resulted in much cleaner garments, but at least they would no longer stand on their own and repel wildlife.

There were two natural hot springs on site, so the rest of the early evening was spent relaxing and hanging out with some of the other hikers for a bit before heading back to my room.  Since I was never up later than 9PM when hiking, I found it hard to stay up past “hiker midnight” off the trail also.  This had been a nice, easy stop to resupply, but it would be nice to return to hiking again tomorrow.  This was a long trail.  I always felt the need to keep moving, knowing that the northern window would close quickly.