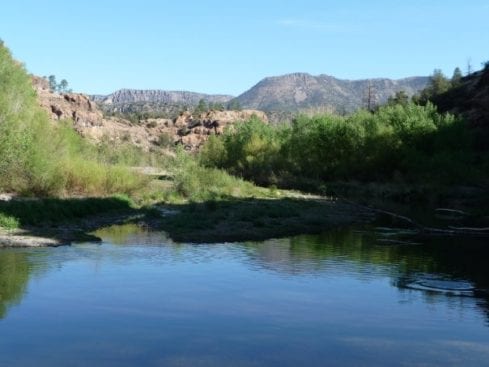 “Stop, just stop,” I yelled at the hollering turkeys.  I was surrounded by what sounded like 3 or 4 big Gobblers that had not shut up since daybreak.  Standing slowly, I looked down the hill ahead and saw one big bird strutting back and forth.  There were at least two more up the hill behind me.  I felt like I was in the middle of an impending Turkey battle.  I was spotted, though, and the war cries quickly ended.  I was probably not the female they had hoped to impress.

Packing up quickly, I headed for the Gila river.  I wanted to get as close to Doc Campbell’s as possible to have an easy hike tomorrow morning.  I was looking forward to the popular resupply point, seeing some cliff dwellings for the first time, and staying at a little B&B with hot springs I had heard about.

Coming to the intersection with Trail 232, I paused and considered my options.  I could take a right and head about six miles to Highway 15 and burgers and beer, or I could take a left and ford the Gila River all day.  After yesterday’s bushwhacking, this was not a tough decision for me.  I turned right and took off with a spring in my step.  I was headed for “town food.”  Once I hit the highway, I would have a 15-mile road walk to Doc’s.

The “trail” out to the highway was faint at best, and I had crossed Sapillo Creek twice within a mile.  As the trail faded, I recalled yesterday’s bushwhacking and slowed to a halt.  Hell, if I was going to cross creeks and bushwhack, I may as well do it on the Gila, which I had heard was beautiful.  I pulled out my map and noted the disclaimer at the bottom of the page stating that the Gila could be dangerous if its seasonal flows were high.  I had no idea if this was its “season” or not, but it seemed a little late for high waters.  I was comfortable with water and hated bushwhacking and horse flies, so the Gila was.

I reached the river and stood looking across the river for about five minutes.  I could see no trail.  Taking off my pack, I put all my valuables and electronics on top, unfastened all the straps and buckles, and started wading.  The water was deep, with a fairly strong current, but it was manageable, never coming up further than just above my stomach.

A couple of hours later, I had given up trying to find the trail, and although there were a couple of times when I saw what looked like some faint tread, it never seemed to extend more than 10 yards before fading away.  I followed the river, walking along the banks and constantly crossing the river until my legs were worn out.  The resistance of the water forced me to use muscles I did not normally use while hiking.

Around mid-morning, I crossed the river and pushed through some thick bushes to find a mule camp with a partially fallen, old paddock.   There was a wooden sign that said Sapillo creek was about two miles behind me.  That had to be wrong.  I had been hiking for four hours and had only hiked about 4 miles, two of them uselessly in the wrong direction.  I did not realize the river had slowed me down so much.

The Mule camp must have been the end of Gila civilization.  After the camp, I began finding the trail about 50 percent of the time and crossed the river too many times to count.  The trail hugged the cliffs.  If I crossed the river and headed straight back towards the base of the cliffs, I often found the trail.  I was also excited to pass about ten small rock cairns, although most of them were hidden behind bushes, and I saw them as I passed.

The rest of the day settled into a rhythm – wade, bushwhack, follow some trail, wade, and wade again.  Someone had told me I would cross this river over 100 times before I was finished.  It was challenging hiking, but I was distracted by the beauty of the land and the river weaving in and out of the rising red cliffs on each side of me.  Time passed quickly as I passed several more mule camps.  No bend in the river offered the same views as I searched for cairns and any hint of how much further I needed to go.  At times I could imagine what this remote place must have been like thousands of years earlier, with no sign of man.

By late afternoon my legs were shot from all the water crossings and climbing embankments in search of the trail.  This was tough hiking, and I was ready to call it quits for the day, but I needed to get closer to Doc’s, so I kept moving.  Finally, I arrived at a trail intersection.  This was exciting – two actual trails!  There was even a sign that said Highway 15 was only about 2 miles further.

I dropped my pack and sat down on a large rock, pulling out my maps to spread them on my lap.  “Hi,” I heard a voice say.  OMG!  I leaped straight up, turning quickly and sending all of my stuff flying.

“I’m sorry,” said a girl in a Forest Service shirt.  “I did not mean to scare you.  My name is Jeannie.”

I battled between the joy of seeing another person and the embarrassment of not hearing her and looking a little spastic.  When you have not heard human voices for 2-3 days, it can be startling to hear one ten feet away suddenly.

“No, that’s OK. I was just a little surprised.  I did not expect to see anyone out here this late,” I said with a friendly smile.

Seeing people was almost always good – 1) They might have food, and 2) They could give me directions, usually in that order.  I was comfortable with my maps, but local knowledge was typically far better than any map.

Jeannie was out here doing trail maintenance (thank goodness), and we chatted about the typical trail topics – where I was going, trail condition, gear, upcoming trail, etc.

Directions to Highway 15 were slightly better than trying to follow the trail.  I  needed to cross the river at the Allen Camping Area.  She said I would know where this was because the bank sloped down low enough for me to cross.  I thought this was pretty much the whole bank, but I just nodded.  I would then need to hike straight through the camp to a pole with no sign and then find and climb a very steep trail straight up the hillside.   I had a goal and was excited to be closing in on “civilization, so I did not mind ending the day with vague directions and a tough uphill.  I thanked her for the information, threw on my pack, and headed down the trail toward the river.

The directions were exactly as provided, and I skipped up the hillside after I found the trail.  I reached the top around 8 PM and stood looking down the road.  It was hushed, not a car in sight on the old faded blacktop.  I was too tired to go further and was fortunate enough to spot a dirt-access road running alongside the main road.  I headed about 200 yards down the access road, turned right into a small group of trees, and threw down my pad and bag for the night.  I was asleep about 10 minutes after dropping my pack and settling in for the night.  Hopefully, I would not get bit by any creepie crawlies.