Trail Finding on the CDT 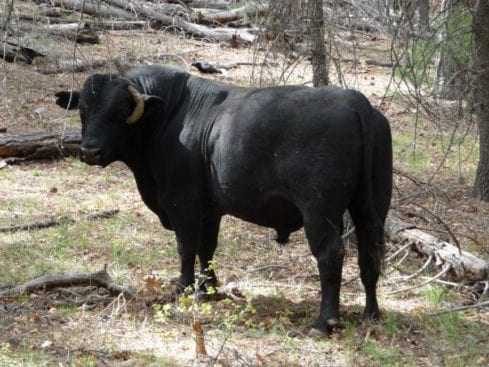 Today was a tough day. The hiking included a mix of old ATV tread, bush whacking, and some actual trail. The bush whacking and trail finding was harder than I had expected, and made me reevaluate the use of a GPS due to how much the trail finding slowed me down.

I started the day on roads out of town, before consulting my maps and choosing to follow what appeared to be an old ATV tread, for about a mile. The routed was indicated on my map, but I began questioning my decision as the route began to fade away about a mile into it. When the tread turned east, I spotted a line of rock cairns headed across a rocky field, running north. There was no trail, but someone had done a nice job of building the small rock cairns, so I followed these down to a creek. The direction and contours were a close match to my maps, and I was fairly confidant I was at least heading in the right direction.

The cairns seemed to disappear at the creek, but I followed the stream since it ran in the direction I wanted to go. There seemed to be a faint path, which was probably just an animal trail, but I continued on, pushing my way through overgrown brush, and looking for any indication of a trail. Suddenly, I spotted another rock cairn! The sense of relief was enormous. I made my way to it, and upon reaching it, stopped to look for the next one. There it was! The cairns were spread apart, but I was at least moving in the same direction as another person on foot had obviously moved.

The route finding continued for about an hour. I was getting frustrated. It was hot, horse flies were biting the hell out of the back of my legs, and I was not really sure where I was at this point, other than aimlessly following cairns that did not seem to correspond with any trail on my maps.

I spotted several cairns moving up from the creek, and spent the next two hours doing some brutal bush whacking. I shoved my way through sharp, ripping brambles, and moved up steep side slope. I cursed the Ley route, and myself, as I wished I had done the alternate road walk. The rest of my prior hiking gang was probably set up on some nice roadside patio somewhere drinking a few ice cold beverages.

Pushing through thick brush, I suddenly stepped out into an open area, surrounded by pine trees. Immediately in front of me was an absolutely perfect little spring. It was crystal clear and icy cold. It was almost magical. There were no cattle trails leading to it, and it looked as if it was not used by anything but wildlife. I did not have it on any of my maps, and looked around amazed at the sudden appearance of this little oasis.

Filling my water bottles, I climbed up to the top of a small hill above the spring, where I found actual trail. It even appeared that some trail maintenance may have been done fairly recently. The CDT was random like that. I could be bush whacking one minute, and then stumble out onto a newly cut piece of trail that ran for a mile before suddenly disappearing into cross-country nothingness again. I enjoyed that about this trail. I loved the randomness of it, never knowing what came next, or exactly quite where I was headed. Of all the trails I had hiked so far, this one was hands down the most challenging. Of course all that love would not be realized until AFTER I had made my way through those sections.

I had a big climb, once I found the trail (forget about any silly ole switchbacks) up to the intersection with the CDTS (yes there was even a third route) trail, where I almost missed the turn onto trail 232, because it was so faint. The dry, sandy climb reminded me a lot of the PCT, without the switchbacks of course. After the climb, the maps indicated it was all down hill to the Gila River, and I was pretty excited about reaching a big landmark tomorrow.

I stopped early evening, and had a couple of PB&J tortillas for dinner. I would continue hiking for about two more hours after dinner, until I finally found a spot to camp for the night. There were no good flat spots, but I finally found some space on a small hill where I could lay out my sleeping bag. It was way too rocky to set up my tarp, but I was able to move around rocks and make a little spot to lay down. I did not really like cowboy camping. My sleep was always fitful as I waited to be bitten, or have a visitor join me in my bag for the night. I much preferred the security of a thin piece of nylon and netting.

Today was a day full of route finding. Other than bear sign, I saw very little wildlife. What I did see, and see daily, were big black cows. They are so common, that I have almost reached the point where I rarely even notice them anymore, but today I had an interesting encounter with a cow couple.

I came over a small ridge and startled a female cow laying next to the path I was following. She jumped up, startled, and stumbled away as she kept her wide eyes locked on me. About 20 yards away, on the other side of the path, was a much larger bull. He watched the interaction, and then slowly stood to stand staring at me. I stood and watched to see what he would do next. He was really big, and had big horns, just a walking mass of solid muscle. If a cow has any kind of facial expression at all, his was irritation. He swung his head towards the clearly distressed cow, walked over to her, and leaned his massive body against her. I watched as she visibly calmed, and then they both walked on about 30 yards before stopping to graze, with the bull keeping himself between me and his cow.

There were only those two cows, and they were definitely together. She was pretty upset, and he clearly calmed her down. I don’t know if you can attribute emotions or intelligence to cows, but the bull definitely assessed the situation, and decided on the course of action once he determined I was no threat. I could literally see him thinking the situation through as he swung that massive head back and forth between me and his cow. The female (do you call them heifers?) was also obviously relieved when he provided her comfort, and let her know that the puny human would not be a problem. I would be more aware of cows going foward, especially the very large thoughtful bulls.